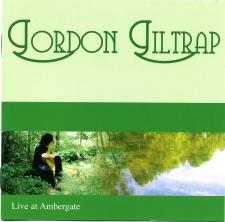 This unusual CD was recorded live and unedited in the middle of Shining Cliff Woods, Ambergate, Derbyshire on 20-21st August 2002 and is meant to be heard on headphones.

The only people present were Gordon and the sound recordist Dallas Simpson. This recording utilises a cutting edge technique called binaural recording. This is an exciting and cutting edge development in recording which lends itself to the music and virtuoso performance of Gordon Giltrap. It uses specially modified ultra miniature professional quality microphones in the sound recordists ears. So the recorder actually samples his hearing and by listening on high quality headphones, you are effectively listening through his ears.

Binaural recordings give a better surround perspective when played on high quality headphones at a lower volume. Due to the setting of the recording, the performances were generally relaxed and informal and brought out the best in the playing of Gordon Giltrap.

For more on the technique on binaural recording that was used on this CD, please see the article on the Guitar Anoraks pages in the News section.