A Taste of Classical Giltrap 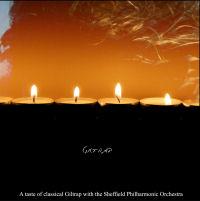 This is a 25 minute long, limited edition of 500, charity CD celebrating the 2005 Birmingham Symphony Hall Concert with the Sheffield Philharmonic Orchestra

The CD includes music not available anywhere else at the moment, one of the recorded movements from the Eye of the Wind, Gordon's favourite, the Andante Cantabile, the solo guitar parts for the Brotherhood Suite and a special dedication from Gordon. Every penny of the purchase price goes towards supporting the future development of the orchestra.

The Eye of the wind extract is taken from a recording by The Sheffield Philharmonic Orchestra on 30/31st July 2004 at St Paul's Hall, University of Huddersfield, and ends with Gordon talking about the inspiration and background to his artistic / musical achievements.

To commemorate this concert and what Gordon described as "the most important concert of my career" and "the realisation of a dream" he kindly gave permission to reproduce this unique classical temptation. It is his gift to the Sheffield Philharmonic Orchestra (SPO), it will hopefully raise funds for on-going musical development and we are honoured to receive such a generous gift.

A very limited quantity believed to be still available.