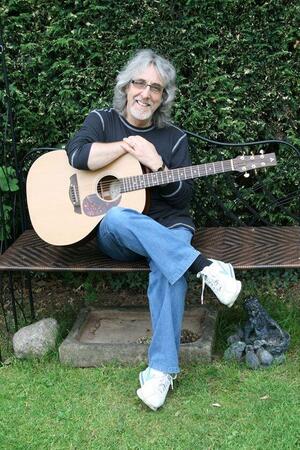 Hello everyone. Every month that comes round I get a gentle nudge from Sue Holton to say " it's that time of the month again" and off I go wracking my brains to try to find something of interest to say during these troubled times but the thing is I always do somehow manage to find things that I think might be of interest to those of you who follow this life of mine!

Over the past few months I, like many of the musicians in the world right now have started to think about the future of live music and music making in general. During this lockdown period I have personally become more creative than I have done in recent times. Maybe it's because I don't have to focus on the live work and have had the luxury to focus on composition along with my musical partner Paul Ward.

In between time I have had the great pleasure of guesting on a few of my friend’s albums adding a bit of acoustic and electric here and there. The latest being an electric break using my nice custom Paul White Strat on my dear pal Carrie Martin's jewel of a song from her new album called White Kites, and before that on the Cyndi Lauper classic Time after Time. I have also been adding a few lines to my pal Nigel Bates songs one of which was played on Tom Robinson's show a few weeks back.

I now think the time has come to offer my services in a broader way to all you songwriters and composers out there who know my style of playing and would like my trademark sound on one of YOUR recorded creations.

I would really welcome your feedback to this little dream of mine, and if you have something that you think would benefit from a bit of GG on there just private message me via Facebook or use the website contact form and let's take it further. I'm more than happy to work within a sensible budget for my services and there is no harm in chatting.

The world has changed and we all have to try and change with it, and it would give me great pleasure to play on whatever you feel would work and as I said earlier as long as you know what you’re getting it could be great fun methinks.

I look forward to your thoughts.

What I have found during lockdown is that I have been able to devote more time to composition. Maybe this is because I'm not encumbered in having to practise for upcoming gigs thus freeing myself to totally focus on the music. The good news is that Paul Ward and I have come up with in my opinion music that is equal to THE LAST OF ENGLAND.

The thing that astonishes me is that even without my regular practise regime I’m still able to summon up the technique to execute good recorded performances to a standard that I'm satisfied with! Paul bless him has been very patient with me over the years and has been happy to work at the snail’s pace of my limited recording expertise. A few months back he persuaded me to invest in a little 8 track digital recorder with memory card so that ideas could be got across to him in minutes instead of me recording pieces, burning them onto CD and then sending them via snail mail. Once I had learnt to use the beast it enabled me to send the files via my PC and get them to him in minutes instead of days! 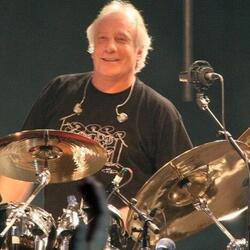 Let me give you an example. A few weeks back I came up with a chord sequence for a pal for a song he was working on and I asked Paul to get it across to him via our new system. After he transferred the chords I had recorded he had a listen to it and was SO taken with it that he urged me to build on it. I literally knocked it off in minutes without regarding it as anything special. Over the next few weeks I kept coming up with ideas including strapping on an electric and knocking off a few top line melodies. In the meantime Paul had constructed a cracking rhythm track with a killer bass line. We just kept throwing ideas back and forth. It was then that Paul said he would love to have "real drums" on the track and wondered if Ian Mosley from Marillion and my old drummer from way back would be up for it. Paul regards Ian as the best in the business and I can't help but agree with him.

Anyway, I rang the great man and he said "yes". The end result is a four and a half minute full on prog rock track entitled TURNING EARTH that has had a fantastic reaction from close friends who have heard it. I truly don't know where this stuff comes from and never question it or over analyse it, I'm just grateful that it still comes, and cometh it still does! The piece has a HEARTSONG vibe to it and almost could have been written at the time.

Paul and I have more than enough material for a new release and the problem I have had was stopping the flow of ideas and drawing a line for the time being under the writing process and let Paul carry on producing his fine arrangements. He is still working on material we wrote yonks ago, so I let him get on with that until we are both satisfied with the end results. The album will be finished when it's well and truly finished. As yet we don't have a label in mind but I'm confident that the right one will show itself.

With regard to TURNING EARTH.I sent the finished mix to Pete Townshend and he truly loves it, and calls it a "triumphant return" to the kind of material I was writing during my prog rock heyday. Praise indeed from the master I'm sure you will agree.

In terms of returning to playing live again it certainly looks very doubtful for the foreseeable future because of Covid and in all honesty I have no desire at this time to tread the boards apart from the obvious risk to my health, and being minus a Spleen it ain't gonna happen. I think that maybe my future lies in studio work and teaching, and after doing this for a lifetime it's time to step back and move on creatively in other areas. In all honesty I haven't missed gigging as much as I thought I would and although I feel very privileged to still be able to do it, it truly is damned hard work and I'm no spring chicken any more at 72, and not to sound churlish, my career as a gigging musician apart from a few highlights, in the main has always been a struggle in getting the gigs, and only in the past few years have I had a top class agent in the form of Lee Noble to represent me.

I guess I have made a rod for my own back in terms of live work, dragging round a car full of guitars and effects to give a wide variety of sounds that I think folk would find interesting, but the turnout at my shows haven't been vast. Don’t get me wrong, I’m grateful that the faithful few have made the effort to come out to hear me play and it has brought me great pleasure to do so. I realised many years ago I was going to plough a narrow furrow with these tunes of mine, that I knew would have a limited appeal.

It's all in the lap of the universe and who knows things may change and I may be able to do a few shows. We can only wait and see. But a huge THANKYOU from the bottom of my heart to all of you faithful few who have kept the faith. All of the above aside, let us not forget that I was spared through the skill of the surgeons hands to still be here doing what I'm doing and sharing these random thoughts with you. Without the love and support of many people I have come through remarkably well, surviving three major lots of surgery and the devastating blow of losing my beloved son. Music has kept me going and I'm so grateful for this musical gift that nature has bestowed on me, a gift that I like to think I never abused and continue to build on. 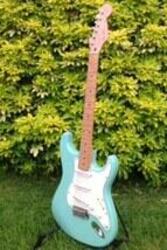 It gave me great pleasure to contribute a bit of electric guitar to one of Carrie's wonderful songs 'White Kite' last month. My guitar of choice was that lovely surf green custom built Strat copy that Paul White made years ago. It’s a lovely instrument and it was great to get it out of its case and use it on a little guitar break for that fine song. Carrie was pleased.

In between composing I have been turning my hand to a bit of DIY! We recently had some serious work done on our conservatory having some of the hard wood replaced and thus needed painting so this I did and I'm pleased with the result!

Keith is a remarkable man and new friend who has helped me out beyond measure over the past couple of years fixing odd bits of electronic gear for me and also letting me bench test some of the wonderful valve pre amps and microphones he creates in his garage at home. The man is a genius as well as being a fine cook who when visiting brings home-made bread and rock cakes among other delicious culinary creations. I could go on for hours about this remarkably kind and clever man. Suffice to say it gives me great pleasure to give him a name check within these pages.

I have much more news to share with you next month including details of a possible re-release on vinyl of TROUBADOUR in memory of Del Newman, also news of the choir project that has finally been completed for The Queen Elizabeth Hospitals charity that was put on hold because of the pandemic, along with other news that may be of interest to you. 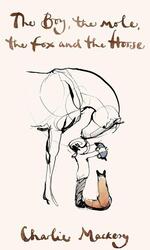 The Boy, the Mole, the Fox and the Horse.

Check it out. Very uplifting and spiritual. 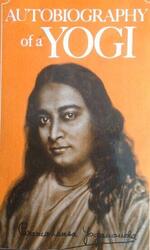 Also: The autobiography of a Yogi. Could be a life changing read!

Be well, be safe, be happy. xx