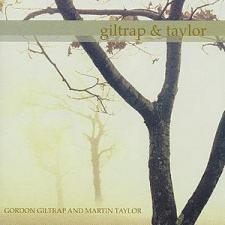 A re-issue of "A Matter of Time" from 1991 on Prestige Recordson CD but with added live tracks, it represents a vital chapter in the career of two of the worlds foremost musicians.

A Matter Of Time saw Gordon experimenting with guitar synths and the track was based on Vaughan Williams' wonderful Fantasia On A Theme Of Thomas Tallis, while Empty started life as piece of library music and is one of the few things he's written on a 12-string. G & T Blues (Giltrap & Taylor, not Gin & Tonic!) sees Martin jamming over Gordon's theme. Shady Tales is the closest thing I get to a jazzy ragtime piece, Gordon confesses.

Martin Taylor gave his first public performance in a music shop window at the age of eight - and hasnt stopped stunning audiences ever since. He came roaring out of the same musical tradition that brought us the genius of guitar players like Joe Pass, George Van Eps, Chet Atkins and Lenny Breau and, by his early twenties, he was touring the world with jazz violin legend Stephane Grappelli, whose early recordings with the Gypsy guitarist Django Reinhardt had been a significant early influence.

"Giltrap and Taylor" represents a marriage of true minds where diversity in terms of both style and approach to the guitar provide a lodestone of creativity - and none of its enchantment has been lost in the eleven years since its original release. The album sees Martin exploring new musical textures with the aid of guitar synthesisers, calling forth the occasional sounds of symphonic strings and choirs from his steel string acoustic. But the electronics are never allowed to intrude; they represent merely another specifically chosen hue upon a richly constructed musical canvas. Further innovations abound; thats not a string bass you hear on the second verse of the beautiful "Song for Alex", its a guitar string cunningly detuned to give the song its amazing sense of breadth.

Listen out for more of Martins original compositions - some of which strike a very personal theme: "Collins Meadow" was titled after his place of birth in Harlow, whereas "Ginger" is named after his great-grandfathers prize fighting brother. Its interesting to note, too, that this recording also contains the original version of Across The Pond, which was to receive a rereading on Martins 2001 Sony Jazz album release, Nitelife.


When two guitarists of this calibre get together, you know the musical sparks are going to fly. Although from different musical cultures, Gordon the classical-rock acoustic picker and Martin the consummate jazzer, for a brief moment their worlds collided and the result of that collision is this super album. Just as fresh today as when it was first released and much better for the remastering, the songs and their arrangements offer a unique recipe to tempt the musical palette.
- Guitarist Magazine