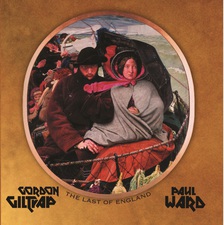 Made by Psychotron records, only 500 copies made, in a stunning semi-laminated gatefold cover and on bright orange vinyl with superb audio production. The 1st 100 copies come with a signed poster, 150 copies with unsigned poster and 250 standard copies

Gordon Giltrap? Where do you start? This veteran performer has been treading the boards since the late 1960s when his first album appeared on the Transatlantic label. Since that time with successive solo albums, a dalliance in the 1970s with electric prog rock and any number of collaborations, the watchword has always been musical quality and brilliant guitar playing. Oh yes and that tune called ‘Heartsong’.

Gordon’s latest enterprise places his acoustic guitar against the rich orchestrations of his latest collaborator Paul Ward. Paul who? He met him at a car boot sale in the 1980s soon realising that Paul had been a fan since childhood.

Fast forward 30 odd years and the duo have created a superb, pastoral, album of lush acoustic and orchestral textures. The first seven pieces are related and collectively called ‘The Brotherhood Suite’ and inspired by the pre-Raphaelite art Giltrap viewed in – amongst other places – Birmingham Museum and Art Gallery.

The remainder of the set includes a mixture of tunes commissioned by or dedicated to friends and family.

Ward’s arrangements are never intrusive but always complementary giving an extra dimension to Giltrap’s solo guitar. It’s evident a lot of thought has gone into this aspect, and the informative liner notes highlight the mutually shared inspiration. Fairport’s Rick Sanders adds violin to the closing piece – and standout – ‘A Promise Fulfilled’.

An instrumental cd from Gordon Giltrap - the gifted guitarist who gave the UK a big hit record, 'Heartsong' in 1978 - teamed-up with talented keyboardist Paul Ward. Paul produces this pastoral music with fine violin playing by Ric Sanders on one track, 'A Promise Fulfilled' This uplifting album takes its name from an 1855 oil painting - 'The Last Of England' - by Ford Madox Brown. Both painting and record supply feelings of light & flight and deliver a promise of a better tomorrow beyond brush strokes and detailed liner notes. There is much Greensleeves and Lavender Blue in folk tempo - a delightful dilly-dally - the whole album acts as a whole and although each of the fourteen tracks bear their own names, such as 'April Love' and 'Sadie In May', the default position is always the ever faultless, 'The Last Of England'.