Music For The Small Screen + The Solo Album 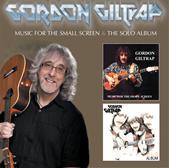 This release contains two of Gordon's albums from the 90s.

Disc 1: Music For The Small Screen (originally released in 1995,) features a selection of Gordon's commissions for the BBC and ITV, including Heartsong, his theme for the BBC Holiday Programme and The Carnival, the theme to Judith Chalmers' Wish You Were Here.

The booklet contains track-by-track annotation for both albums by Gordon himself, as well as photos and ephemera from his own archives.