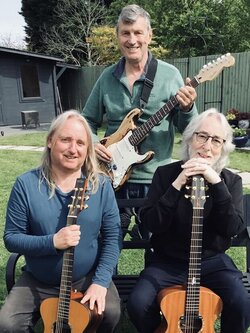 On Friday April 29th Hilary and I travelled to beautiful Malvern to spend a few days with our friends Paul and Christine White. On the Sunday at The Chestnut Inn a pub in Worcester our host Paul and my good friend Ray Mytton had offered their musical services to play at a charity gig in the town and asked if I fancied doing a spot. You can guess what the answer from me was! The event was over two days to raise money for a local hospice a worthy charity of course as are all charities.

The Chestnut is a lovely old pub dedicated to live music with its own stage and its own sound system. I had a GREAT time and played for about 45 mins and it went down well. There was no pressure at all apart from it being pretty noisy at the back, but that’s the nature of pubs I guess.

Our friends Pete and Linda Bonner from Psychotron records were camping over the bank holiday weekend just a couple of miles from the pub so it just made perfect sense to drop in. It was lovely to share it with them. On stage it felt like I had turned the clock back to pre Covid, pre being ill and pre losing my boy .I was cracking witticisms and really bonding with the audience. Even though the pub sound system wasn’t great it sounded pretty good. Colin the pub landlord was over the moon with it all, bless him.

It was lovely to see that outstanding singer songwriter and friend Carol Sampson in the audience. Carol as you may know sung on my Peace will Fall CD and was singing later that evening. Sadly we couldn’t stay. All in all a good time was had by all.

I know it was mentioned last month but worth a return methinks.

The year was 2012 when I rang that genius of the keyboards Oliver Wakeman to see if he fancied collaborating on an album project. I had no idea what a roller coaster of a journey it was going to be. The end result was some very memorable concerts together and an album and collaboration I still hold very dear to my heart. 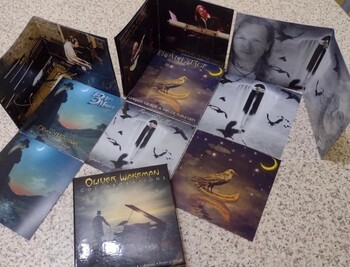 I received this superbly put together box set of three albums, one live, and two studio albums. Two from Oliver and I and the third with the guitar legend from YES Steve Howe. Oliver’s attention to detail here is breath-taking, from the packaging to his superb production skills.

More information where you can obtain the box set is on Oliver’s website. www.oliverwakeman.co.uk

Here are two lovely pics of myself and that lovely chap and brilliant keyboard player Adam Parrish. 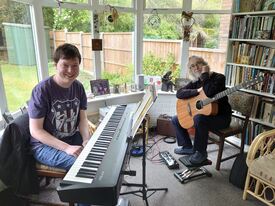 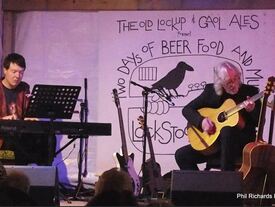 The first one taken in our garden room rehearsing for our upcoming Wirksworth concert at The Old Lock Up on May 9th and the following one on stage at the gig. It is such a lovely feeling getting back to some semblance of normality after the horrors of Covid. Adam and I hadn’t played together since lockdown and it was as though those two hadn’t existed. We plan to do some recording next month so folk can hear what we actually sound like live!

Live on May 7th

Gosh it was cold on stage at Wirksworth on Saturday May 7th! Playing open air is risky even at the height of summer but in early May even more so. What made up for it was the superb location and brilliant hospitality from organiser Tim Freeman who had organised the event two years prior but it finally happened, and is spite of the cold we played well and enjoyed it. Adam Parrish just goes from strength to strength as a fine all round musician. Great to have friends Cath and Geoff Olner there to share the weekend with.

It was such a joy all round to be the special guest of Carrie Martin at an Alstonefield Village Hall concert on Saturday May 14th.This was Carrie's night and I opened the show with a 45 minute set to warm up the audience for this sold out concert. Carrie as ever sung and played superbly and I joined her in her set where we performed a very emotionally charged version of Time after Time and Holly Blue. 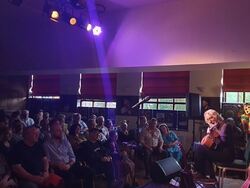 Alstonefield is one of the many beautiful villages in Derbyshire and the last time I played there solo was in August 2018. I remember the evening well because it was the first concert where I used my JG Vintage acoustic created in memory of my late son Jamie. I used that very guitar on the night. As you can see from the photograph I’m using a very nice Yamaha LA8 acoustic, a very fine guitar and no longer made. This was the second time I had taken it out to use in a live situation, the first time was at Wirksworth the week previous but more of that in a separate report.

May 14th was a wonderful day all round having old friends Malc Welch and Karen Boulton attend the show. Our hosts for the night were Dave and Val Littlehale who looked after us right royally and the following day we visited that stunning folk artist (her description not mine) Sue Prince who along with her husband Terry run a most stunning gallery exhibiting her work. We met Sue and Terry after the show who joined us for supper at the Littlehale’s. 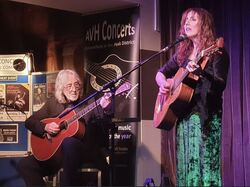 You can read all her about her work by following the link further down. I played a couple of tunes in the gallery on Terry’s guitar and it was filmed and appeared on their Facebook page unbeknown to me but that was fine. On leaving, Sue gifted us with one of her superb books created during lockdown.

It continues to be such a privilege to still be treading the boards and bringing as much pleasure as I can with these tunes of mine. A huge thank you to Martin Snodin for organising such a memorable evening. I look forward to returning.

On returning home on the Sunday we were graced with the presence of our lovely agent and special person Lee Noble. It had been well over three years since we saw him last and it was fantastic to catch you with him and get him up to speed with so much musical news.

Here is just a tiny example of the work of Sue Prince. 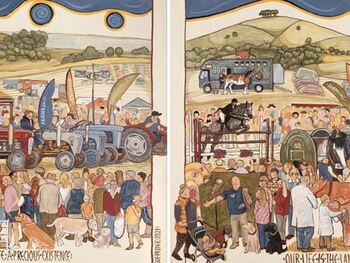 A few years ago I bought a lovely YAMAHA LA8 acoustic (shown in the picture of Carrie Martin and me at our Alstonefield gig higher up this page) but never ventured to use it live in concert.

I was rehearsing for my gig with Adam Parrish and used the guitar. At the end of the session it appeared to have well and truly blossomed out! It was probably due to being thrashed several times playing Heartsong! Either way it is sounding very sweet so I decided to take it on the road and I’m pleased to say it does the job admirably.

This is the third of this model I have bought over the years. The first one I used on “Forever Gold “from the Shining Morn album, then found another one to replace the first one when I sold it ( can’t remember who to) I eventually sold that one!

This one appeared on FB market place for a really good price. It was being sold by a lady on behalf of her Mum whose late partner had owned the guitar. When I went to the house to check it out I told the lady that she could get far more for it than the asking price, I even offered her more cash once I had sold a few more little used instruments. Her reply was that she “just wanted it to go to a good home.”

The Yamaha LA 8 is no longer available and was part of the company’s high end handmade range and features solid rosewood back and side and a beautifully bound inlaid ebony fingerboard always a sign of quality. It came with its own bespoke case. I fitted a Rare Earth pick up it and it sounds lovely. 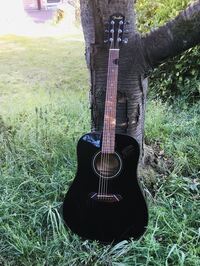 So there I was walking past the window of the Age Concern shop in Woodhall Spa Lincolnshire and there in the window was this striking Fender CD60 acoustic in black. The price paid was £65 and with some serious footling, a new set of strings and bridge saddle to replace the plastic one, this little beauty slowly came to life. It is of all laminate construction and obviously does not have a huge voice but has a really sweet tone. Because of the bridge design I think this could be an early issue from 2006 onwards.

This will make a nice gift or a fundraising item at some point in the future.

Great fun working in it! 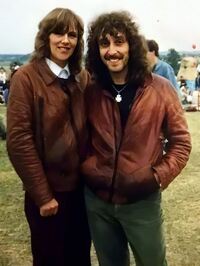 So there we were this morning Hilary and I visiting a poorly relative when we received an email from a dear friend wishing us a happy wedding anniversary! We looked at each other and realised we had been so occupied with concern for our poorly relative that we had lost track of what day it was.

So, here am I on this Sunday evening May 22nd giving my love and thanks to my beautiful Hilary for 36 years together. She has through her love and devotion been the making of me in so many ways, and without her I truly feel that much of what I believe to be my finest work would not have been written!

We have weathered so many storms together, shared laughter and sorrow.

Here is to many more years together.