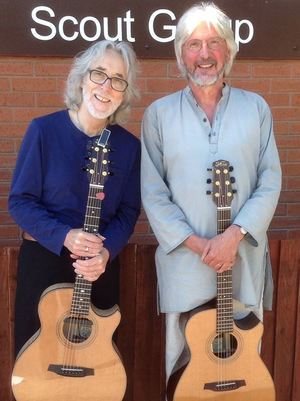 As a long term fan of Gordon’s music, ever since first seeing him live at Newcastle City Hall in March 1978 at the tender and impressionable age of 17. l have closely followed his musical career: regularly attending the gigs, buying the records, cds and books.

Consequently, as a fan and an enthusiastic guitarist, I was aware of Gordon’s sharing days, but had previously thought that the distance for me to travel to them was a little too far, for a parochial northern wimp like myself. However, when it was announced that the 30th June sharing day was to be dedicated to playing Heartsong it was the proverbial kick up the pants that I needed to get my act together and go to a sharing day. I have played a half-baked ‘approximation’ of Heartsong for years and decided that now was the time to challenge myself to actually learn to play it all ...and properly!

Setting off from home, just outside Durham, just before 6am, I reached the scout hut in Mere Green Sutton Coldfield around 9.30am. Several people, including Gordon, were already there, chatting and setting up, I was relieved it was so easy to find the correct venue and that parking was no problem. On arrival, Gordon and his team warmly welcomed everyone and people mingled over a friendly chat with coffee and biscuits. 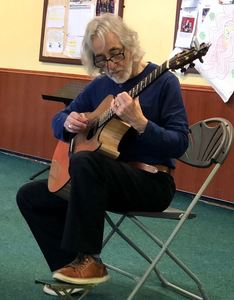 The programme for the day opened with the dozen or so attending guitarists in a semi-circle around Gordon, who kicked things off with a passionate rendition of Heartsong. This was followed by a fascinating chat about the actual song: its origin’s, its recording, the instruments used and the fellow musicians involved. This was followed by a very entertaining and relaxed Q&A with Gordon answering several questions from the audience with entertaining stories and anecdotes about Heartsong.

Following this, the first instructional part of the morning session focused on Heartsong’s opening strummed chordal section. Here Gordon initially demonstrates it to the whole group in detail, emphasising the rhythm, timing and where to use the double strum to best effect. Following this he then worked his way methodically around individual players, and groups of players, patiently giving help, advice and encouragement to help them play this section.

After recharging on more coffee and biscuits, we started on the second instructional part of the morning session, the tricky (for me anyway) ‘widdly widdly’ section. Here Gordon, once again, clearly and slowly demonstrated the different parts to this section of the song first to the whole group, before working his way around individual players giving encouragement and guidance. I found this particularly helpful and it gave me a clearer understanding of how to play it. It helps that Gordon is a patient, humorous and natural tutor.

Everyone broke for lunch around 1 pm. The venue is opposite a convenient branch of Sainsbury’s so it was easy to nip out for a quick sarnie come back for more social chat and coffee. 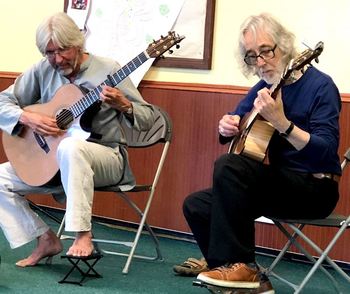 The afternoon session kicked off with Gordon interviewing Nick Hooper. Nick is not only a superb guitarist but an acclaimed and award winning film/tv composer with not one, but two Harry Potter films under his proverbial belt. This entertaining and informative interview ended with Gordon and Nick playing several duets together, including Kerry Dancers, all of which not only sounded great ...but was fantastic advertisement for Fylde guitars.

Following on from this, Nick played a brief solo set of several pieces from his latest CD of Irish music: ‘6 Strings’. I really enjoyed Nicks short set, particularly his impressive arrangement of Star of Munster. In fact, I enjoyed it so much I bought his CD from Amazon that very night.

Further recharging with coffee and biscuits brought us to the second half of the afternoon session, which was an all request solo set by Gordon. With so many great pieces to choose from the audience requests included, amongst others: Down by the River, The Lords Seat, The Echoing Green (my choice) and Tailor Bird. It was only appropriate that Gordon should close the afternoon session, and whole day, with a powerful and impassioned rendition of Heartsong.

The day closed around 4.30/5 pm and after a lengthy drive I was home by 9pm. It was a long day but very well worth it and I’ll certainly make every effort to attend the next one.

The whole day was friendly, relaxed, entertaining and helpful, Gordon was always on hand and keen to answer questions, give advice and autograph items: he kindly signed my vinyl visionary LP and the headstock of my K.Yairi Gordon Giltrap signature model YGG-1 guitar.

There is an old adage that you should never meet your heroes as you’ll inevitably be disappointed: In this instance don’t believe a word of it. If you play guitar and enjoy Gordon’s music then I would highly recommend that you attend one of his future sharing days.

Photos 2 and 3 in this article © Norman Glover