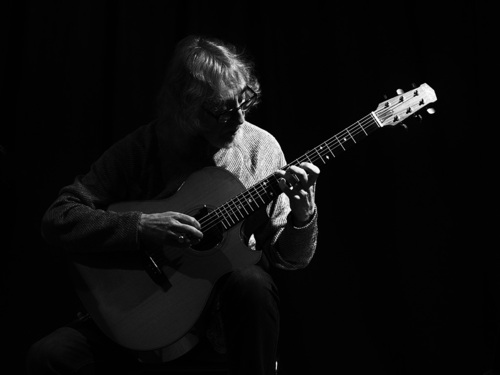 It’s 1969. A stylus softly descends onto the surface of the vinyl album. 'Listen to this!' says my excited friend, 'You won’t believe It!' The album was Transatlantic’s Contemporary Guitar Sampler Volume 2. And so I listened to 'Lucifer's Cage' by Gordon Giltrap for the very first time and was ensnared.

Nearly 50 years later that same man stood on stage at my local Village Hall here in Sharrington, Norfolk and captivated yet another audience. A lot of water flows under the bridge in 50 years so just how did that come about?

I’ve been fortunate to have become a friend of Gordon's after meeting him at a guitar workshop and he came to visit us two years ago. I took him to our village hall of which I’m a Committee member. Wistfully, he said, 'One day, I’d like to come and perform here, if I can.' He knew then that he was very poorly and a rocky road lay ahead. Indeed, he couldn’t have known then if he'd ever perform again. Two years have passed. Things have changed. He's still on the slim side but his energy and passion are returning and he's gigging again. Although self-indulgent of me to suggest my vision to the rest of the Committee I knew that now was the time to see if Gordon fancied the challenge of playing Sharrington VH! We have spent the last two years seeking grants and raising funds to renovate the hall. What better way to celebrate completion of the first phase of improvements?

Given the go ahead and an affirmative from Gordon things could proceed. Having never previously arranged a full-blown concert for an artist of Gordon's stature, I was not sure what was involved. Firstly, selling tickets. No problem! All sold merely by word of mouth within 48 hours of announcement and payments collected promptly so all expenses could be met.

It’s difficult not to be concerned that you have covered all bases as, figuratively, when that curtain goes up there is nothing else that you can do. If you’ve missed anything out it is too late to put it right! With that in mind, I contacted Gordon early in the New Year and requested his requirements. I quickly learned that our PA system, although good, would not facilitate his needs. He began talking of leads, speakers and boxes in a language that flew over my head like little birds. I pretty soon realised that the only solution was to bring in a professional sound engineer and what a good decision that proved to be!

But where to look for the best advice? I phoned PMT Music Shop in Norwich (Great company, unfortunate name!). They gave me the name of a sound engineer who had been in the business for 20 years. And so I phoned Martin Shearing of MJ PA (deserves the mention) with trepidation to see if he was free as this was very short notice. Fortunately, he had nothing in his diary for that night and agreed to install and monitor Gordon's sound system for him.

Gordon and I were at the hall when Martin arrived and unpacked a myriad of boxes and leads from a large white van. With practised ease, the whole ensemble was constructed and Gordon suddenly found he had every device he could possibly wish for. It was important for me that he had exactly what he required to achieve the best sound possible as I wanted the evening to be special for him too! That sound system made all the difference and resulted in a very smiley face!

OK, are all Gordon's requirements fully met? Check. Co-performer's needs catered for? Check. Heating on early? Check. Hall chairs and tables fully set out? Check. Cloakroom sorted out and manned? Check. Bar stocked and manned? Check. Car parking attendant sorted (poor chap!)? Check. Meet and greet, Check! Photographer, Check. Videoer content with his position and inputs? Check. Catering for afterwards? Check. Introduction notes remembering, importantly, to thank all volunteers for their assistance (as without them this night could not have happened)? Check! Is that it? Really? What have I missed? Nothing!

And then it's all happening. Accomplished classical guitarist, David Green from Kent opens the show with a virtuoso performance before a break to recharge glasses. Then the man himself appears and does exactly what I expect. He just blows everyone away with his skill, passion, warmth and humour. If you’ve never been to one of his concerts then you’re missing out! I quote two overheard comments from the evening: “We are in the presence of greatness!” and “He doesn’t just perform his music, he lives it. He is an essential part of it!” What a night! For me, and maybe Gordon too, a dream fulfilled. I ask how many in the audience would come back if I can persuade him to return. A huge cheer fills the Hall! He's caught them all!

I’ve always believed no one can play the guitar like Gordon. He maintains there are a few out there who, in his own words, 'Get it', but, having heard some of them play, despite their obvious talent, to me there is always something missing: the man himself. Only Gordon can play Gordon's music.

Though slight in stature he is bursting with talent, enthusiasm and passion. What else can you say? There is no one else in the world quite like Gordon Giltrap.