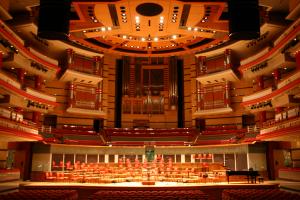 The story behind the concert:

It is the story of a dream that began in 1978, when guitarist Gordon Giltrap was commissioned by Capital Radio to write a piece of classical music for the Operation Drake adventure, which took 400 young people from 27 nations, around the world on a sailing ship called the Eye of the Wind, on a scientific expedition.

The music was played live and broadcast on radio, but was only ever recorded once, by Gordon and a school orchestra. At the same time, Gordon wrote another classical piece inspired by the Pre-Raphaelite paintings in the Birmingham Art Gallery and Museum, which he called the Brotherhood Suite.

Despite continuing to write and perform guitar music, Gordon never again wrote any fully orchestrated music, and these two pieces became almost forgotten. It had been a dream of Gordon's since that time to one day be able to perform these tunes with a well known orchestra able to do justice to his music.

During a musical holiday in Bredon in September 2003, Gordon gave copies the original Eye Of The Wind and Brotherhood Suite recordings to all the members of the group. This triggered Geoff Olner who was there with his partner Cath Basilio, to ask Gordon if he ever played this music now. Geoff plays guitar and violin, and is a member of the Sheffield Philharmonic Orchestra and he wondered if it would be possible for them to put on a performance of Gordon's music at some time? As you can imagine, for Gordon, who had dreamed for so many years of this very thing, the seeds of the idea were now sown. Perhaps the dream could finally come true ?

The event would not have been possible without financial backing and support from Gary Hexley. Not only would this concert feature two of Gordon's lesser known works, 'The Eye of the Wind Rhapsody', and a piece written for guitar and string orchestra, 'The Brotherhood Suite', but it would also be the realisation of a dream to have them performed on the same night at Britain's finest concert venue, The Symphony Hall, Birmingham.

The concert at Birmingham's Symphony Hall on 30th March 2005 was the culmination of nearly two years of preparation by Gordon, the Orchestra and the many guest performers and behind the scenes workers.

The Hall itself is an amazing space, with fabulous acoustics, seating 2200 people. The venue was almost full, and the audience included many fans of Gordon's who had travelled from all over the world for this one off very special event. Most members of the "Bredon Gang" were present, including Tim and Lori who had flown over from America, so it was a great reunion.

The introduction to the evening was given by the surprise guest, Jasper Carrot, but there was only ever going to be one star of this show  GORDON GILTRAP, and he did not disappoint.

Gordon gave us a few solo pieces to get himself warmed up and was then joined by The Sheffield Philharmonic Orchestra (S.P.O.) for The Brotherhood Suite. He introduced them as The Gordon Giltrap Band and they combined so well with Gordon that it was hard to believe that they had only rehearsed together a few times.

Gordon then left the stage for the S.P.O. to perform his Eye Of The Wind Rhapsody. It was very moving to think that this was the first full performance of these two pieces of incredible music.

Violinist Andrew Bernardi played Gordon's wonderful Guiseppe Pedrazzini violin, which had been purchased by Gordon for 20 at a bootfair ( he only wanted the case it was in ! ) and turned out to be worth many thousands of pounds.

In the second half there was more brilliant solo Giltrap and he was also joined by some of his friends including Raymond Burley, Rod Edwards, Gilly Darby, Andy Reiss and Rick Wakeman.

It was hard to believe that in the weeks building up to the show Gordon confided that he was not nervous, but was terrified !!

He looked so at ease on the stage and was nearly note perfect all night. He gave his usual relaxed chat on stage and there were also some great jokes and ad-libs.

The evening was a great triumph for Gordon, certainly one of the highlights of his career, and he left the stage to a richly deserved standing ovation. 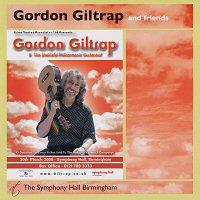