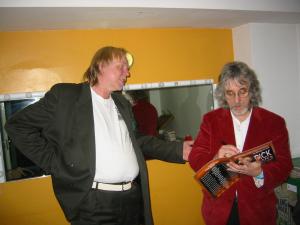 Rick writes:
"I have to admit that even I was surprised by the great reception and excellent reviews that The Grumpy Old Picture Show received last year, and was even more surprised when the promoter, Original Entertainment Programming, called me and said they had had an amazing amount of requests from theatres to put the show on in 2008. 24 to be exact!

Whilst this almost takes up my self allotted quota of shows for each year in one fell swoop, it did seem a shame that so much hard work on putting the show together would have only seen 18 or so shows performed and so I agreed to take the Grumpy Old Picture Show out one more time!

For those of you who did get to see one of the shows last year, it's only fair to mention that this will indeed be very much the same show, with just one or two minor changes here and there.

In November 2007, Rick Wakeman decided to try an ambitious new style of touring. Rather than take a full band on tour he used a screen behind him to show early footage of himself, and recordings of the New English Rock Ensemble and other friends including Gordon Giltrap. He then played along with the filmed footage and interacted with the other guests who also included his daughter Gemma.

Gordon was delighted to be involved in this new undertaking with Rick, as they have been friends for many years. There is also a new Wakeman / Giltrap CD scheduled for release in early 2008.

Below you can read Gordon's account of the preperation for this project, ( previously featured on the October News Page ) read some press and fan reviews and see a couple of photos from the concerts that Gordon attended.

Gordon wrote - On Tuesday the 25th of September, Hilary and I drove to Shepperton Studios to film my musical item with our pal Rick Wakeman. This is all going to be part of his forthcoming nation-wide GRUMPY OLD PICTURE SHOW tour.

The event's leading up to last Tuesdays recording was quite eventful inasmuch as I had a VERY limited time to learn the piece that Rick sent AND to record it in readiness for the filming on that 25th of September date.

The sequence of events were as follows...Rick's package was sent to my house on Wednesday, but being away in Lincolnshire visiting family I wasn't able to collect from the Post Office depot until Thursday morning, which I duly did. The package contained....one CD, an instruction manual (basically a list of what I should play where) and FOURTEEN pages of music with the appropriate chords written in. Needless to say I started to panic!

I spent the remainder of that day trying to get to grips with it all. The following day - Friday, I had to drive to Malvern for a mixing session for my forthcoming Secret Valentine album, so that only really left Saturday during the day, part of Sunday, and all day Monday in which to complete this piece.

Rick's original idea was for me to learn the piece which calls for acoustic AND electric solo's to be written, and then record everything at Shepperton over a three hour session! For me this was asking the impossible, so I came up with the suggestion that I record all my parts here at home and then 'mime' to them on the day. Fortunately after ringing Rick and putting this idea to him, he agreed it was indeed a GOOD idea. A big sigh of relief came from my end, BUT it was still a tall order time wise to get it done.

On top of all this, my trusty Mackie mixer decided to blow up on me! I was listening to the guide piano parts for the piece, which is called incidentally COUNTER ATTACK, when suddenly there was a loud 'pop' from my mixing desk, a strong burning smell and clouds of smoke emerged from the rear of the mixer. 'I don't need this' I thought and started to quietly panic, but held myself in check whilst I explored the loft for my spare 8 channel mixer. I then had to try and remember how it worked and what plugged in where.

On the Saturday morning, after mentally planning what I should play, and what instrument to use I spent FIVE hours on a fairly (for me) complex arpeggio section for the piece as instructed by his highness the Lord Wakeman. All this added to the extra pressure I personally put on my self by deciding to play all the parts apart from the electric sections on my new FYLDE 12 string! I'm delighted to report that I managed to pull it all together in time, by burning the midnight oil over a couple of nights and completed it in readiness for Tuesdays filming. I forgot to mention that Rick will be playing 'live' each night to my pre-recorded guitar parts, and that the piece COUNTER ATTACK was written with my style of composition in mind...Bless him!

Shepperton studios is an amazing place, and it was a great feeling to be walking through spaces where SO many legendary movies have been made. The filming took place at the studios of Classic Pictures, a facility that Rick uses frequently for all of his DVD projects. When we arrived, Rick's daughter Gemma was doing her section for the show, so we popped across to the coffee shop for an hour or so while she finished. We were an hour early I hasten to add!

What was required of me was to mime to my recorded bits in front of a single locked off camera, and to try and remember all the (scripted) ad lib lines that Rick fed me. After about three full run throughs we sort of got it. I say sort of because a few of the sections weren't as tightly mimed as I would have liked, but Rick appeared to be deliriously happy with it all, and said that it would be 'fine on the night', and it was 'just a bit of fun and anyway no one will really notice'.

I shan't give away too much of the plot, but I think you get the picture and the rough outline for the show's content, which will be a series of filmed sketches, musical items and some special musical guests that Rick will be duetting with each night.

This is an incredibly ambitious undertaking for Rick as there isn't a great deal of manoeuvrability in terms of ad-libbing because the whole thing is timed to precision and tied to a strict script.

I personally think it's a great idea, and I wish the great man all the best with it, because believe me, he deserves it. If all goes well, there are plans afoot for it to be released on DVD. 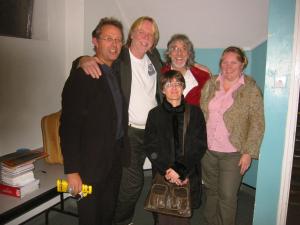 THE TOUR
As expected, the Rick Wakeman Grumpy Old Picture Show Tour went down well with loyal fans of Rick, and introduced Gordon and his music to some who may not have encountered him before. The only criticism seems to be that possibly a bigger screen would have been better, however, the project was deemed an overall success, with everyone being very complimentary and impressed with Gordon's contribution.

Gordon himself attended two of the concerts as part of the audience along with family and friends, who met up with Rick afterwards.

Rick Wakeman / Strawbs enthusiast Lindsay Sorrell wrote :
"Gordon's bit was definitely the best "accompaniment" on screen, as there was only him in the shot instead of 3 or 4 musicians which made everyone look so small it just irritated me. The "chat" with Gordon worked fine too. He seems a really nice guy. I confess I don't know anything much - he sounded an excellent guitarist."

To read more reviews in Word file format, please click the icons below.