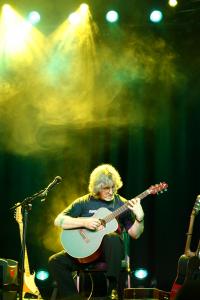 It has been announced that the local council want to close the Tower Arts Centre in Winchester, a venue that Gordon has played on several occasions.

Local music fans, dismayed at impending loss of a live music venue have started an online petition which Gordon, along with several other high profile musicians, has signed.

Gordon says " Hope the petition works because this really is a stunning and magical venue."

Have you ever wondered what happens to all Gordon's used guitar strings? Gordon's wife Hilary tells how they have been put to good use raising funds for a special school in Bury St Edmunds.

"Back in the 90's, Gordon was at a music fair with, amongst other guitarists, Albert Lee. I saw him put a used string in a waste bin and thought, 'I'll have that' as I am a hoarder and collector of 'history.' Needless to say, I've asked for a few more along the way.

Over the years Gordon threw away many packets of used strings until I hit on the idea one day of him signing them and me giving them away via the merch table. It was good to see them go to interested people rather than into a bin.

We were up at The Railway Inn in Greenfield on the edge of Saddleworth Moor a couple of years ago where we shared the breakfast table the following morning with a couple of men who had been to the concert the night before. As one does with chatting, all sorts of information came out including the fact that Mick Truman is a teacher at Priory School, in Bury St. Edmunds - a school for students with complex to moderate learning difficulties Priory School

I'm not sure how we got onto the subject of the give away strings but I hit on the idea of asking for donations for them. I also now take along signed photographs. Although sometimes there is no take-up at all, some people have been SO generous and, to date, we have sent the school £200 . In return we have received some lovely cards from the children. We don't get over that way very often but, time allowing, we want to drop in one day to say hello to everyone." Hilary

Deep Purple's Ritchie Blackmore has always stated that he admires Gordons playing and on his website he names Gordon as one of his favourite acoustic guitarists.

Gordon has always been both surprised and extremely flattered by this, and was delighted to spot the following in a magazine:

Gordon told me: "This is from the March issue of Classic Rock Magazine 2006 in an interview with Peter Makowski. It's a 9 page interview and this appears on page 42 of the magazine.

Question:...
Is there anyone in the business that you would like to perform with, or write music with?

Ritchie:
The people that I look up to, I'd be terrified of. So I'm back to square one. I suppose I have a high standard, or a different standard, where I don't like too many people in the business from a musical point of view.


I look up to someone like John Williams or Gordon Giltrap from a guitar point of view. But I'd feel very ill at ease in their company.


3rd June 2007
Hilary and I have just returned from our 10 day break in North Yorkshire, and whilst there we celebrated our 21st wedding anniversary, in the sunshine I'm delighted to report.

Whilst we were away I really got stuck in to re learning some old Giltrap chestnuts like The Kerry Dancers, Secret Valentine, and newer pieces like By Angle Tarn and Prayer for Philippa.

This is in readiness for the proposed album for Loughborough University, to demonstrate the sound of the new polymer Rob Armstrong guitar which was featured in last months news items.

The new album has the working title of SECRET VALENTINE, and will be a collection of my favourite melodic, romantic and reflective pieces to date. The plan is to make this a CD-ROM, which for me will be a first!

It's great re visiting these old tunes of mine, it's like saying 'hello' to old friends, it also gives me an idea of the inner workings of my musical imagination when I was writing this material. On my return I looked at that great guitarist on YOUTUBE - GuitarGR - playing my version of Kerry Dancers. Click here This also gave me an idea of how to give it a fresh look by just changing the format slightly and adding a few embellishments here and there.

I played the new version at Smarden on Saturday and it was favourably received. What a great new village Hall Smarden has these days, and it gave me a good feeling to know that my past two concerts there contributed to the fund raising for this amazing new building. Well done Graham and all at Smarden for doing such a great fund raising job and making this dream come true for the village.

Thanks to Mike@tvelements.com for the "Pink Floyd" lighting effects too! 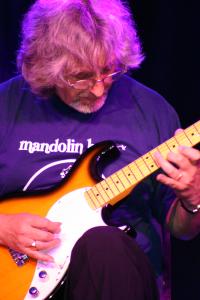 Summer appears to have arrived, and I'm looking forward to seeing all these projects come to fruition:

The TROUBADOUR book is now complete and will be at the printers in the next few days.

ACOUSTIC mag will be doing an interview with me about the book to coincide with my new TROUBADOUR column for them starting in the next issue.

I need to get on the case with the great Wakeman to chivvy him up to get moving on our current CD/DVD project. He's such a busy boy, but I'm sure it will all happen at once...Watch this space as they say. By the way I had to laugh at the description that Guitar Buyer gave me as a Billy Connolly lookalike! Oh well, there goes my early Al Pacino image...grin.


On a sad note, I lost one of my favourite aunts last week Aunt Hilda, who was a remarkable and lovely human being. She reached the grand age of 96. REST IN PEACE DEAR LADY.

Well, must be off, have LOADS of practise to do for the new album. Hilary and I hope to see you at the next GG event. Keep an eye on that gig guide my friends, Sue makes each entry as comprehensive as possible… background information on the gig plus travel and parking instuctions when available.