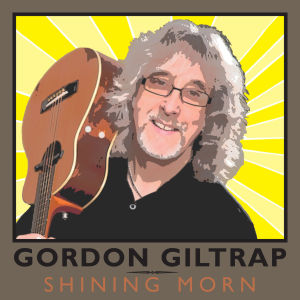 By the time this reaches you I will have embarked on what I consider to be one of the most important tours of my career thus far. I shall be giving a detailed breakdown in the next News page !

I made a slight faux pas in last months news letter by stating that the new album has 25 tracks! In fact it is a 24 track release and it was only through proof reading the sleeve details that we realised that track 13 had been skipped over...Spooky or what? Full information is available HERE


I sincerely hope that when the new album comes out on 17th May it will meet with all your approval. This album has been at least five years in the making with tracks being re-recorded and stuff added to etc etc. I have agonised long and hard over this release as I do over all my albums, in the hope that it will match up to Troubadour which many of you know I regard as my finest work. We live in hope.

Another busy time during April.... A couple of Radio interviews that I did from the Mailbox in Birmingham for Radio Kent and Radio Oxford to promote the new album and tour. It is always fun doing these interviews via an ISDN line from a tiny room in Birmingham. Inevitably the presenters ask me to bring a guitar and perform live, which is a bit of a challenge with just the one microphone and limited space but I love it! 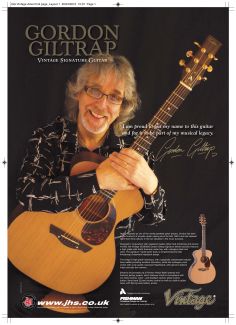 Things are beginning to build up towards the launch of the new GG signature guitar designed by Rob Armstrong in conjunction with JHS, and to that end I organised a photo session with my friend Mark Byers who is based in Worcester. This happened on Saturday the 17th and in spite of me NEVER being happy with the way I look these days (old age and all that) the pics turned out fine, so it's all systems go. I can't begin to tell you how great this guitar is going to be and I sincerely hope that the musical instrument industry favours it well. We expect the guitar to be available in July.

For more information on the new guitar read the press release by clicking the icon at the bottom of this page, or to WIN a guitar CLICK HERE and enter the simple competition. 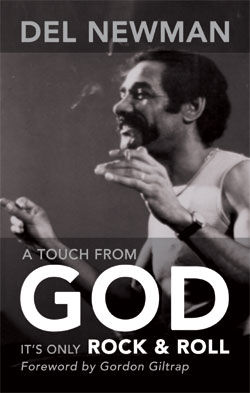 A TOUCH FROM GOD

I'm delighted to report that A Touch from God, It's Only Rock and Roll written by my dear friend Del Newman is being published on May 7th by Apex Publishing.

Mention was made way back about this wonderful book that Del at the time was publishing himself, but since a major publisher has come on board, this has turned it into a totally different ball game.

The wonderful part as far as I'm concerned is that Del asked me to write the Foreword to the book. It was only later that I found out that I was Del's first choice in this department, and his second choice was Elton John! Del, bless him has even put my name on the cover.

This is a real honour for me to not only have Del as a good friend but to have been associated with, in my opinion one of THE great orchestral arrangers ever working in the rock and pop idiom!

This is a great read for anyone interested in the music business and the inner workings of recording studios and session musicians.The book will be available via the usual online outlets and from all branches of Waterstones.

Buy it, I promise that you won't be disappointed!


SHOP OPENING FOR THE TRACY SOLLIS LEUKAEMIA TRUST IN EVESHAM. 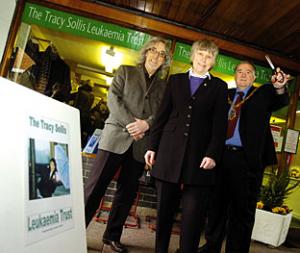 On the 7th of April Hilary and I found ourselves in Evesham at the opening of a new charity shop run by Sue Sollis for the Tracy Sollis Leukaemia Trust. The shop's ribbon was cut by the Lord Mayor and speeches were made and treasures bought! One of the donations for the shop was a cheap Encore acoustic in a rather attractive blue. I suggested that I take the guitar away, set it up with new strings, sort out the action and record something on it and then hopefully raise some more cash for this worthy cause by either auctioning it OR selling raffle tickets over a relatively long period. We have gone for the latter. The guitar has been duly sorted, signed and recorded with. I recorded Shining Morn on it, and you know it doesn't sound half bad for a cheapie. Watch this space for fund raising details!


GIGS OF NOTE AT THE TIME OF WRITING.

on the 8th of April was a cracker with pretty much a full house. Friends in attendance were... Mike Stranks, John and Pauline Adams, TWO Martin Greens! Robin and Lynne who were holidaying on a narrow boat just a few yards from the gig, Bob and Jane Wilson. I have MANY memories of playing at this venue when it has been VERY thin on the ground attendance wise, so it made a refreshing change that folk turned out to see me on the night, bless em! 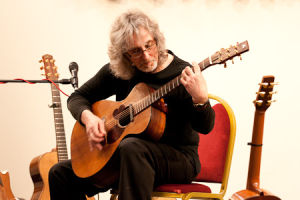 The following night I played a freebie concert to raise money for the Ashby-de-la Zouch twinning association at Packington Village Hall and what a great night it was with many of my family members in attendance including Rachael, Mylon, Simon, Charlotte and young Jack. I of course got them to stand up and take a bow during the performance! Special thanks go to Mike Stranks for doing his usual superb job of sound mixing and to Joan and the team for wonderful hospitality on the night. Much cash was raised and Hilary was presented with a beautiful bouquet of flowers and a lovely bottle of red for moi!
Photo © Normanton photography.

April 10th was another cracking night and once again THANKYOU Mike Stranks for doing the sound, you are indeed a friend sir.

Hilary and I took some time out to visit friends Val and Dave in Somerset on our way down to Weymouth to visit my daughter and grandchildren. Friends Eddie and Serina joined in a belated birthday meal at Val and Dave's beautiful home. Thanks guys. The following day Hilary and I dropped into Dorchester on route to Weymouth to look round the town and for me to drop into my favourite music shop there, Harmony Music who are currently selling one of my old guitars! Whilst there I did a nice part exchange deal on a lovely early 70s CSL gypsy Jazz guitar which has the most outstanding tone. I had one of these guitars years ago and always regretted selling it. This current one has the same full tone as my old one. I think this one is a keeper! If you are ever in Dorchester do drop in to Harmony Music and say 'hi' to Paul who is a lovely man and will always make you welcome. I'm delighted to report that my family in Weymouth are all well and the weather was SO kind to us whilst we were there! Oh I forgot to mention that while I was in Dorchester I got my hair cut which I hate but it has to be done!

By the time you read this I will also have played my annual fund raising concerts for this charity which as you know is close to my heart. There is a gallery of photos from the weekend HERE


Charity Concert at the Fleece Inn

The Gordon Giltrap weekend held at the Fleece Inn, Bretforton on 24th/25th April has totalled £1,303.17. This is the sixteenth year that Gordon has raised thousands  of pounds towards the treatment and care of leukaemia patients. The amount will be used to purchase new equipment for The Tracy Sollis Laboratory, which is situated on the grounds of the Royal Free Hospital, London. Founder of The Trust Sue Sollis said "We are really lucky to have Gordon as Patron. Despite having a really hectic schedule this year, Gordon made sure he found the time to raise funds for The Trust. I am really grateful for his continued support".

On 24th April, the Fleece Inn at Bretforton - originally a half timbered medieval farmhouse - was again the venue for this years fund raising concerts in aid of The Tracy Sollis Leukaemia Trust. Gordon has been supporting this very worthwhile charity for a number of years by offering his services gratis, and the event is a popular sell out every time.

The venue is a VERY old barn alongside the Fleece with an authentic 'atmosphere' and walls that cannot be described as perpendicular. Watched over by Helpful Harry the Hedgehog (the Trust's mascot) the event was a relaxed and laid back affair with two way banter and stories included.

After a brief address by Sue Sollis – Mum of Tracy and founder of the Trust that commemorates her daughter's name - Gordon commenced entertaining us in his inimitable style.

A slightly revised running list included some newer pieces, such as Shining Morn, the beautiful Em's Tune and (a new one on me) Ladies of Lichfield: interspersed with older favourites like the evocative Down the River and of course everyone's top tune The Dodo's Dream.

My wife, Fiona, reported to me later that during the interval The Dodo was being hummed in the queue for the Ladies – the Old Grey Whistle Test in action!

The interval was enlivened by – joy of joys, a raffle - drawn of course by Mr G. 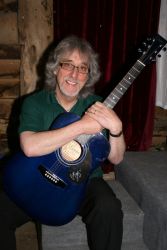 As a twist there was a second raffle – a Grand Draw being promoted by The Tracy Sollis Leukaemia Trust to be drawn in August. Gordon had taken a fine sounding, donated guitar from the Trust's charity shop in Evesham, had restrung it, tuned it, autographed it and recorded a special exclusive CD and the whole package was to be the prize. I understand the person who donated the guitar is thrilled with this marvellous fund raising idea and will be attending the Sunday concert.

The second half of the performance again included old and new tunes; On Camber Sands, Rachel's Reflections and – two personal favourites – Ives Horizon and Echoing Green/London. All too soon Gordon played a medley of his greatest hit as his finale.


This was another wonderful evenings entertainment by the Troubadour made extra special by raising around £900 on the night for a very very worthy cause. I sincerely trust that this figure will be boosted substantially by the Sunday concert at the same venue which is taking place as this is being written (20.00 hours 25th April).

Be Well dear friends and enjoy this lovely Spring weather. We hope to see you at one of the Shining Morn dates somewhere close to you,