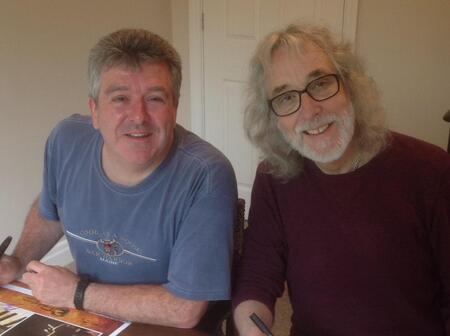 Well, my friends I trust and hope you are all keeping safe and well. This month is not as full as it usually is for obvious reasons. But having said all this we all keep busy.

My dear pal Paul Ward had been poorly with an agonising kidney stone, but he's back to being himself again and is back in his amazing studio working on completing the tracks we have been working on since the release of THE LAST OF ENGLAND. When we feel that we are 100% happy with the end results that will be the time when we feel truly ready to share this music with the world. Until then we keep busy tinkering with these tracks. There will be few jointly written pieces and probably a couple of solo pieces from each of us.


THE LAST OF ENGLAND will be a tough act to follow as SHINING MORN for me was after the release of TROUBADOUR. We aren't trying to make better music than what came before, but just want to continue doing the best work we can to the standard we set with "ENGLAND."

Interestingly Paul and I were offered a recording contract before Christmas but we were still coming up with interesting material and we truly weren't ready to enter into a deal at the time, and then of course the Pandemic came upon us and life for the world changed, so in many ways thank goodness we hadn't completed a project that would have taken so much time, energy and planning to create. So at the risk of repeating myself, when the time is right Paul and I will know

Stay safe stay well and we hope you will find some interesting things in this month's news page.

P.S. An admission...I spent quite a while writing about my first online streaming gig last month only to find out that I had already covered it in last month's news. Daaaaa…. this lockdown must be effecting my brain! Poor Sue, who gently broke the news to me that it had already been written. She is very patient with from time to time and I'm very grateful bless her!

I did my second online stream again for Under the Ghost Light, but this time it was only 40 mins max. I thought I would play the tried and trusted pieces like Appalachian Dreaming, Roots, Angie, Heartsong and Maddie Goes West.

There were no hiccups this time although the Wi-Fi did freeze again but this time during Heartsong. I did this streaming for Under the Ghost Light because it was going to be their last one, and because they were friends and were good to me quite a few years back with their promotion and hard work put in on the SHINING MORN tour.

I wish them well along with all my musician friends who are struggling to keep afloat during this challenging time. 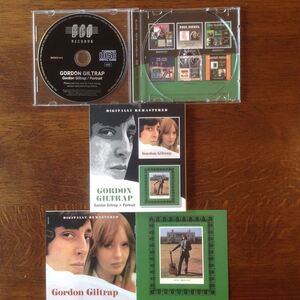 This album arrived in the post a couple of days ago. My very first two albums now re-released and superbly re-mastered and re-packaged by BGO records with excellent and extensive sleeve notes by that most respected Irish journalist John O'Regan whom I met many years ago whilst playing in concert at Limerick University, along with the original sleeve notes by Bill Leader for the first album, and Don Partridge for the Portrait album. The sleeve notes are so up to date that they make mention of my first live streaming on March 26th a few weeks back. In my opinion is probably the nicest package thus far for this ancient GILTRAP recording.

I personally can't bear to listen to any albums that contained my really naive attempts at song writing and earnest vocals, but you can't change history and they were what they were at the time.

This is a very good quality presentation with its chunky booklet and protective wallet, and that rather posed pic taken for the Portrait album always makes me smile! The image was taken by legendary photographer Brian Shuel who took many photographs of show business people at the time including Bert Jansch, John Renbourn, Davey Graham, Bob Dylan, Oliver Reed and many more. 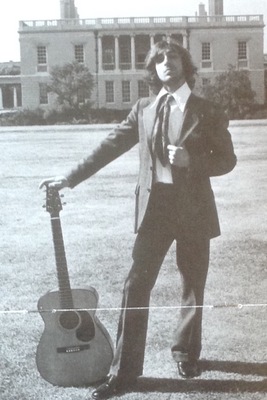 Here I am stood outside The Queen’s House in Greenwich just round the corner from where I lived at the time. The photo on the first album is with my then fiancée Susan Cresswell. Her brother Brian played flute in Accolade with me and also featured on the Portrait album. I haven't seen either of them for years and would love to make contact again. Please God they are both well.

Bearing in mind that is has been 52 years since the release of the first album it's still amazing to think that I still feature three of the pieces from time to time in my repertoire: Ive's Horizon, Fast Approaching, and of course Lucifer's Cage.

The whole thing has been digitally re mastered so I assume the sound quality will be up to standard. I shan't be playing these albums myself because (and you have all heard this before) I just can't bear to listen to my own voice, for I think obvious reasons, but for folks who have been kind enough to say that they did liked my singing, then I guess you will want this in your collection! Available from most outlets including Amazon. I bought this copy (yes I had to buy my own album) from EBay!

For more info go to www.bgo-records.com

I saw for sale last month on EBAY an original early 1960's Harmony 12 string guitar, the same model as the one I bought aged 19 and used on many of my albums from the first Transatlantic release onward up to and beyond the FEAR OF THE DARK album. I sold that guitar quite a while back. Nostalgia is a wonderful thing in some ways and not in others. You remember the feeling of when you first got the guitar and how much joy it brought you, but the reality is that when confronted with a similar model, the memory plays tricks and it doesn't sound as good as you remembered it. The reason for this is that guitar construction has moved on drastically since those early days and even budget models like my Vintage GG range would probably blow those early instruments out the water. 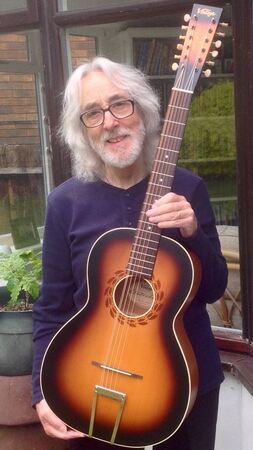 Anyway back to the guitar for sale on EBAY. I decided to put a high bid in the hope of winning, but as time went on I thought " this is crazy" I could buy a new 12 string from JHS for a fraction of the price and was hoping in my heart that I would get outbid, which I did thank God.

I had always liked the look of the Paul Brett designed Statesboro 12 string inspired by a pre-war Stella model used by the legendary blues man Blind Willie McTell. The guitar came with a stunning fitted case at a ridiculous low price to me as a JHS artist. I went ahead and bought it and I'm so pleased I did because it reminds me SO much of my old Harmony but in truth has a far superior sound to my original. This amazing guitar is unbelievably loud, plays superbly and rings like a bell!

The main thing it has done is to re kindle my love for the 12 string once more and has truly inspired me whilst playing it.

Its construction is very basic, (Paul Brett kindly sent me this photo taken at the factory showing the simple ladder bracing pattern for the Statesboro 12 string. The genius of simplicity!) 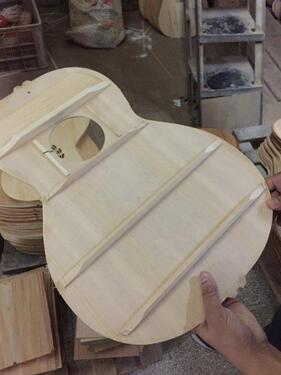 It is truly built for the job and for me has "that" 12 string jangle that many more refined 12 strings don't have, in fact it has a very "raw" sound to it. To my ears it sounds like a Cathedral. And when the company asked for a quote that is exactly what I said. They loved it along with the photograph featured here and taken by Hilary. Women take great photographs as does our beloved webmaster Sue Holton who's holiday "snaps" could easily grace a travel brochure!

So there you have it. A new guitar and a serious injection of joy and inspiration playing it. Thankyou Paul Brett and JHS for producing such an amazing guitar. I was so impressed by it I told my friend Pete Townshend about it and promised to take it with me when I visit when all this darkness passes. 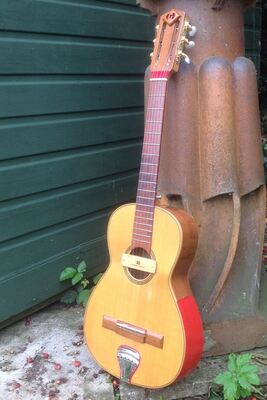 I stumbled across this guitar at a car boot sale and purchased it for £5! Things sort of evolved organically with the idea of retaining the first string at the 10th fret with a screw drilled into the fingerboard to retain it there. I then experimented with stringing the lower four strings an octave above normal tuning as per the octave strings on a 12-string guitar giving the instrument a very bell-like, almost "tinkly" sound. I then I began to investigate capo placing and a variation on a well-used DADGAD tuning. In order to amplify it, I found an old Seymour Duncan sound hole pickup lying around taken from another guitar, so I just jammed it in there. Shortly after that I decided the sound was so pleasing I had it re-fretted and had some decent machine heads put on to make the tuning more accurate. It's a beaten up old thing but continues to somehow work.