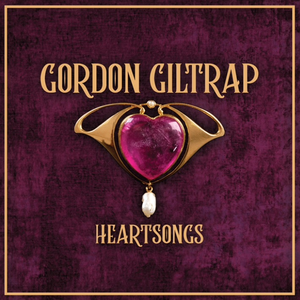 It has been my privilege to record and release many albums over the past half-decade. All have been important to me, but none so quite as much as this release. Not just for musical reasons but for powerful and heartfelt life affirming reasons. This is a way of saying thank you to the surgeons and nursing team at the Queen Elizabeth Hospital Birmingham where I recently underwent two lots of major surgery.

Let's go back to the start of this album’s life. Many of you who follow my music will I'm sure remember my SHINING MORN album of quite a few years back. The licensing period had come to an end with the previous label Floating World, and I really didn't have another record label in place to put it out there again, so it just sort of hung around for a while until I felt the time was right for its re-emergence. I had always felt proud of that album, and because it was following close on the heels of the TROUBADOUR album, I felt it had to at least stand up alongside an album that I felt marked at the time the highest point in my creative career, and of course the sublime production and string arrangements by Del Newman made it a very tough act to follow, but follow it I did!

So there I was last year thinking about the album and wondering what I could do with it. I rang Peter Purnell of Angel Air records to ask him his thoughts on re-releasing the album, and his comments were that maybe it could be revamped as a sort of 'Giltrap and friends' album featuring a handful of some of the prominent musicians I had worked with over the years. Brian May, Rick Wakeman and the like. Although it was an OK idea, it didn't sit right with me, and I really didn't want to mess around with the original album and the pieces contained therein.

I had already thought about making it a charity/ fund raising album, and after the conversation with Peter felt even more strongly about its future in the charity arena. I made an appointment to meet up with the fundraising team at the QE and put the idea to them. They immediately responded in a very positive way, so I set about getting ideas together to revisit the album and re-present it to the public in a relatively new way. 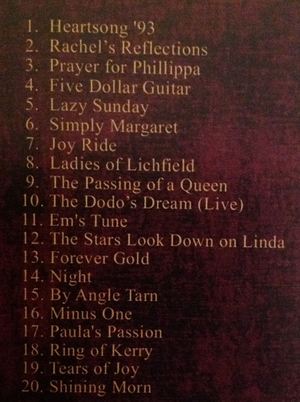 First of all I thought it might be a good idea to add a few tracks that weren't on the original album, and it was then that I thought maybe I could put on as an opening track the all-star version of Heartsong dating back to the 1993 recording. It was then that I came up with the album title HEARTSONGS. I then had in the bag a cracking live recording of The Dodo's Dream recorded at St John's Church in Chichester virtually 12 months ago. The wonderful Mike Stranks had captured that performance, and ironically I was using a no name Chinese Strat copy that sounded sublime. The tail end of last year I was commissioned to write a tune for Pete Bonner's wife Linda for her birthday. It was Pete who released The Last of England on vinyl. The tune turned out well with some nice additional strings and piano from Stuart Jones a friend of Pete and Linda's, so hey presto another potential track for the album. The title ‘The Stars Look Down on Linda'.

So, even though the album is essentially a re-release it does have those extra tracks that weren't on there before. We then move on to the albums design. I was wracking my brains for an idea, then it occurred to me that a beautiful Art Nouveau brooch that I bought my beloved Hilary many years ago might make a striking cover design.

Next job was to find the right person to design the cover, and this is where Gavin Morrow comes in. Gavin did a stunning job of the design work for the vinyl release of The Last of England and so he was recruited to do the job.

At this point I want to thank the following people who contributed financially to the albums creation. Pete Bonner who paid for the artwork, Chris Abrams who covered the cost of the manufacture, Paul Ward for mastering the album, Mark and Jane Day for creating stunning A4 and A3 posters, Mike Stranks for the recording of The Dodo's Dream, and Stuart Jones for his strings and piano on The Stars Look Down on Linda.

It was then down to me to choose which pieces should go on the album and which should be left off. In the end I firmly believe that the end result is now far superior in all areas to the original release! The artwork itself puts the original well and truly in the shade.

Sadly during the course of creating the album my beloved son Jamie passed away, and the album acts as a fitting tribute to his memory. 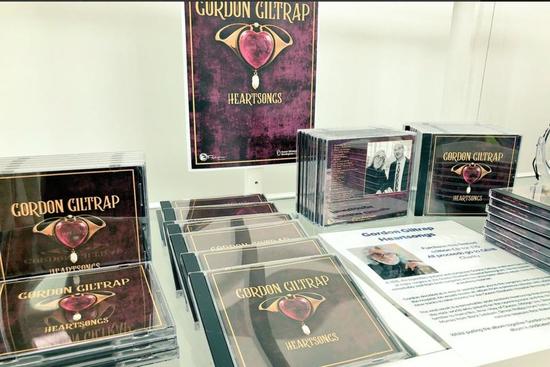 There are various photos on the inner sleeve. One taken by Hilary of me in the foyer of the hospital just a few weeks after my initial surgery, and a beautiful picture of Jamie, Braden and I taken in 2015 once again by Hilary. On the back of the CD is a photograph of myself with my surgeon Dr Mr Samuel Ford, a truly beautiful and gifted man. On the day that the photograph was taken I told him that 'I owed my life to him'. His reply was something along the lines of 'no Gordon, I just did my job and you got better'.

As I say in the sleeve notes that this album is my way of saying 'THANKYOU' and in my own small way trying to give something back. That's why for me this whole project is quite emotionally and spiritually charged and it truly means so much to me.

Please do feel moved to buy a copy. For £10 including UK postage and packing this truly does represent I think good value for money.