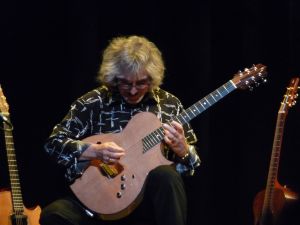 Having retired at the end of June after 40 years (man & boy) in the IOM Civil Service, I now find that (between the odd bout of hoovering etc. for my beloved wife Anne) I have time on my hands to do things like Gordon Giltrap gig reviews during the daytime hours.

So – attached is my humble efforts regarding last Saturday night's "Guitarfest" soiree.

I hope that you (and Gordon) will find it acceptable.

The Isle of Man, normally famous for TT Motor Cycle races, kippers, tail-less cats and fairies (the Peter Pan variety), is rapidly emerging as a centre of musical excellence due to the increasing numbers of world-class artistes who are beating a path to our shores.

In relatively recent times we have witnessed the likes of Robert Plant, The Who, Alice Cooper, Whitesnake, Rick Wakeman, Lou Reed, Ray Davies, Snow Patrol and the Kaiser Chiefs over here.

With the advent of "Guitarfest" we saw the legendary Albert Lee last year, and this year we had a stunning display of stringed (and electronic) virtuosity from the celebrated axeman Gordon Giltrap.

Gordon's recital covered an amazing variety of wondrous sounds from his sundry tools of choice – including an alleged £5 instrument that he had rescued at a car-boot sale!

The music ranged from tunes with a celtic influence to "God Save The Queen"/"Smoke on The Water", a staggering multi-tracked "The Dodo's Dream", and a "take" on that old Georgie Harrison fave "Here Comes The Sun". There was definitely "Something in the way" his guitars "moved".

Not once did a stray note push him into the territory of jazz!

An added revelation was Gordon's sparkling between-song chat. He is verily a shining wit.

Having previously witnessed Rick Wakeman's between-song repartee (during a "Wakeman & Wakeman" gig at this very venue in the Isle of Man) I can only begin to imagine the hilarity if Messrs Giltrap & Wakeman embark on tour in support of their "From Brush & Stone" CD!!!!!!!!!!!!!!!

To close this brief but sincere homage to an excellent concert from a truly superb performer, I can only ask that Gordon retains his links with the Isle of Man for many future visits.

You can also read an online press review here or by clicking the icon below for a Word version.