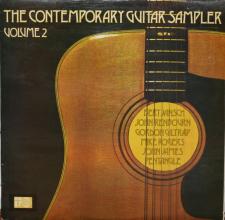 Gordon contributed 2 tracks to this LP by a mix of the greatest guitarists of the day in 1970 - Lucifers Cage, and Confusion.

Other players were, Bert Jansch, John Renbourn, Stefan Grossman, Pentangle, Mike Rogers, Ron Geesin, and John James, many of whom had been great influences on the early Gordon Giltrap. At that time, they were all signed to the Transatlantic label.

From the LP sleeve notes come the following definitions:

Contemporary
"The guitarist communing in the corner with his easy rider is one of the most compelling cult figures of the folk scene. They come and they go, they rise and they fall, they become pop figures of tremendous power, but someone else is always there to catch up the fallen guitar and stroke the silver strings afresh.
Whatever happens in the electric world, fads and fancies may come and go, but that guitarist is always there."
Karl Dallas in the "Melody Maker" 4th Oct 1969

Guitar
"The guitar and its kindred were derived from the East. In the famous Gate of Glory of Master Mateo, to the church of Santiago de Compostela in Spain, a cast of which is in the Victoria and Albert Museum, among several musical instruments may be seen one guitar-shaped, which may be assumed to represent the original "Viheula", the old Spanish viol or guitar. The sides are curved, but there is no bow held by the player; still this is no proof that a bow was not used, since the sculptor may have omitted it. The date of this masterpiece is 1188."
Grove's Dictionary of Music and Musicians Volume ll Edited by H.C. Colles (1928)