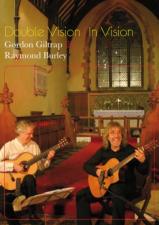 Double Vision - In Vision is a DVD that captures two specially filmed performances of Gordon Giltrap and Raymond Burley. Although both artists have completely different styles they manage to blend both styles together effortlessly in two intimate performances filmed in late 2006 at Stickford Church and Fulston Manor. Having already recorded an album together in 2004 entitled Double Vision the next logical step was to film these two wonderful artists in concert and two specially arranged concerts were set up in late 2006. Both performances feature the two musicians bringing out the best in each other in this rare coupling.

As Gordon Giltrap's and Raymond Burley's schedules rarely allow them the opportunity to play together this DVD will be seen as the next best thing to actually experiencing a live concert.

The DVD contains both concerts in full and also an interview feature entitled Meet Ray and Gordon.

UPDATE -  Dec 09.
Yet another review has been sent to me, for the Double Vision - In Vision DVD. It's from Psychotropic Zone:

On this DVD the folk/rock legend Gordon Giltrap plays his music with perhaps the UK's best classical guitar virtuoso Raymond Burley, who has arranged the tracks for two guitars. They have also released a duo CD as Double Vision in 2004. This DVD features two different concerts from 2006: the first one was shot at Stickford Church and the second one at Fulston Manor. Both recordings have more or less the same tracks but there is a little bit of variation. The track list includes for example numbers 'Maddie Goes West', 'Daisy Chain', 'Simply Margaret', 'A Christmas Carol"'and 'Mrs Singer's Waltz'. The tracks sound really great played with only guitars by these two masters. The very different playing styles of the musicians are very well suited for each other and the sound quality is excellent. The production works in a simple way and this kind of honest and real performance really doesn't need any light show. In addition, the DVD includes a pretty interesting interview with the two gentlemen. This is worth checking out, if you like Giltrap's music or English acoustic music in general.

Two very different acoustic guitarists combine wonderfully on this recording. The folky idiosyncratic Gordon Giltrap performs with the more classically measured Raymond Burley to create music that is both intriguing and intimate. Recorded live in two venues in late 2006, the pair make the music seem almost effortless. The first recording at Stickford Church finds the musicians playing in an empty church without an audience. It is well filmed and recorded, and you can tell that in spite of the intensity it was a highly enjoyable experience for them both. At Fulston Manor they play pretty much the same material before a receptive audience, including Maddie Goes West, Isabella's Wedding and Down the River. Due to the size of the venue the pictures are a little claustrophobic at times, although well recorded both visually and aurally so it does not spoil the atmosphere. This is a pretty rare event too, as the busy schedules of the pair make live dates highly unlikely. A very enjoyable release.

This great review was spotted online at the Bolton News website:

Double Vision is in fact the pairing of two of the greatest guitarists around today - Gordon Giltrap and Raymond Burley.
Despite the fact that these two have completely different styles of playing (Gordon uses a pick and his little finger whilst Raymond just uses his fingers to play), they blend together perfectly.

Double Vision is actually the title of the album they recorded together in 2004, yet because of their hectic schedules it took until late 2006 for them to come together to play live.

There are two intimate concerts here, one recorded at Stickford Church and the other at Fulston Manor. Both concerts have generally the same tracks, and are a complete joy to listen to - and to watch the masters at work is an education. Tracks such as 'Down The River', 'Isabella's Wedding' and 'Maddie Goes West' show just what magicians of music this pair is.

A bonus feature of an interview with both players is an interesting addition to the disc.