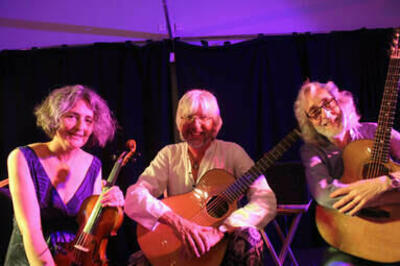 Sadly this concert has had to be cancelled but will be rescheduled at a later date. Please contact the venue for more information - thank you.

Please note this is not at our usual venue, but is at the Quaker Meeting Rooms.

"Oxford has always been a city close to my heart, having played there on a number of occasions.
Sharing the stage with such great players like Nick Hooper and Judith Henderson will be a joy".

Nick HooperBest known for his two film scores for the Harry Potter series, Nick has continued on his creative path using his imaginative and musical skills, which held him in such good stead in the film world, to both perform his own music, and to write novels. Early in his teens, Nick became an accomplished guitarist, going on to study at the Royal College of Music. He then went on to develop a career as a film composer picking up many awards along the way, including two BAFTAs, an Ivor Novello, and a Grammy nomination. Nick has returned to his guitar, working on projects with various musicians, including the legendary guitarist Gordon Giltrap. Nick’s solo guitar album 6 Strings was released by Angel Air Records in June 2018.
Judith HooperJudith has been playing the violin since the age of 6. Having grown up with a classical training in music, a diploma in music therapy at the Guildhall School of Music and Drama led her to develop her long-suppressed inclination towards improvisation and folk music. She went on to enjoy a close association with Cecilia Macfarlane and Oxford Youth Dance, creating the music for several dance pieces, including ‘Journey of Ten Knights’ (Oxford Playhouse) and ‘Cityscape’ (Pegasus Theatre). With Nick Hooper she formed the fiddle and guitar duo Henderson:Hooper in 2001, and the duo released their first full-length CD in 2018, entitled Pete’s Trees. Nick and Judith also perform with the singer/bass player Susanna Starling in their trio The Boot Band.