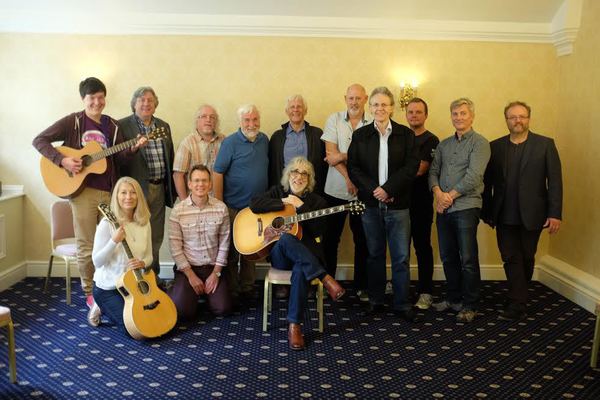 September 11th-13th saw Gordon’s inaugural guitar workshop held at the Old Hall Hotel, Buxton. People came from all over: Somerset (me), Kent, Hull and from places not so far afield including Cheshire. Gordon was ably helped by Garry Burnett, a long standing friend and excellent guitarist who knows Gordon’s music as well as anyone.

The event started on the Friday evening with a meet and greet at 5pm in the hotel lounge where we all met Gordon and chatted generally about what we hoped to get out of the weekend. Everyone seemed to gel really well, there were no egos on display and all present seemed to be as keen to learn from each other as anything. Gordon talked a bit about composition as that was something that a few of us had mentioned as a topic about which we hoped to gain some insight. Conversation tickled merrily along until dinner at 7.30pm after which we reconvened in the lounge and some of those present talked a bit about the path that had brought them here and played some pieces. The whole evening felt very relaxed and was a great indicator of how the rest of the weekend would pan out.

The workshop proper started the next morning at 9am. The first thing we all looked at was Heartsong. In particular Gordon went through the strumming pattern and got us all working at that trying to perfect the flick in the double strum which gives the pattern its distinctive sound. After some time working on that people variously split off into smaller groups in the room or by going out into the adjacent bar area to work on other aspects of the song including the fingerpicking sections. After lunch Garry took me and another on one side to look at something more adventurous - first Magpie Rag and then Country Bluff. My fingers were getting sore by this stage but I kept going and the flexible breakout approach meant that everyone was able to focus on something within their grasp whilst Gordon went around watching and giving advice. Later that afternoon Gordon brought us all back together to look at the harping technique he uses on Nursery Chimes (and which makes guest appearances in other pieces such as Isabella’s Wedding). After some of that it was time to pack up and Gordon set up for an informal concert he was going to give that evening.

Dinner went on a bit longer than anticipated and Gordon (and some of the rest of us!) were pretty tired so the concert was left until the next morning. A few of us chatted in the bar area and played some pieces, but the main topic of discussion was how to keep the momentum of the weekend going once it was all over.

Sunday morning came and after breakfast we assembled for Gordon’s informal concert. The pieces were mainly requests from the floor and he talked through them including the sounds used and any particular techniques. Of course the Dodo’s Dream was a star performance and got a lot of interest, but equally all of the pieces were received by open mouths and jawlines hanging in amazement. The concert went on for longer than planned (not that anyone cared or were timing as we were all having such a good time) and we were surprised when it turned out to be lunch time. After lunch we gathered for a group photograph and began to disperse around 4pm.

For many of the delegates this was the first time they had seen Gordon play up close and personal, and it was an amazing experience. I learned a great deal and met some wonderful people who I am now very pleased to call friends. I will certainly be intent on going to the next event!

I could write reams more, but those of you that know Gordon will be able to imagine much of how it all went. Despite his medical condition his enthusiasm was not dampened and he was completely immersed in the whole experience.

Thanks Gordon - it was well overdue but you did it and it was a huge success. My thanks must also go to Garry Burnett for his tireless efforts and help + support to everyone over the weekend.

“In addition to being a guitar genius, Gordon is a natural born teacher. Whether it is explaining how to achieve some of his famous effects – for example the right-hand technique for Heartsong, or “harping” (when he will actually lean over your shoulder to demonstrate exactly how it’s done) – he is always patient, generous and informative.

He manages to create a wonderful workshop atmosphere which also enables participants to learn from each other. He even takes time out to give virtuoso performances of any of his pieces that students might wish to hear.

Whether you have been playing guitar for a couple of years, or even for decades, and want to learn tips and techniques for taking your playing to the next level, this is the course for you. You will also have a wonderful time. I would have no hesitation in recommending this workshop.”

“The GG Guitar Weekend is a well-structured learning opportunity for anyone wishing to learn new techniques or to play actual guitar pieces composed by Gordon Giltrap. Prior to the workshop, participants are encouraged to select their favourite pieces and accurate tab and notation are made available during the workshop. The techniques required to play the pieces are explained and demonstrated by Gordon and Garry who also make time to coach and support participants in small groups or one to one.

The workshop is run in a relaxed way and is fun and inspirational. Each participant was consulted about what they hoped to achieve from the workshop prior to taking part in it and had chance to have an input into what they wanted to be covered. There is no pressure to play or perform but many found it beneficial to do so. There was a great balance between discussion, watching and listening and playing.

I feel privileged to have taken part in the first workshop which had a great mix of abilities, personalities and experience between us and we all got something that we could put into practice immediately or to work on and improve our playing in the future.

There was a great willingness to share ideas and knowledge during the workshop and we look forward to taking part in future events led by Gordon and Garry. Being presented with a Certificate of Attendance by Gordon on the final day was also a thoughtful touch and something to trigger fond memories of an amazing experience.”

I would just like to add that I also haven't been able to settle back down at work due to what was a life event for myself.

A couple of difficult years in my own life were turned around almost overnight and my passion and belief in myself as a player returned with a bang.

The guy who I play with noticed straight away at our rehearsal this week.

Thank you Gordon, you are an inspiration to all and a very special person.

You are loved by everyone who gets the chance to send time in your company. I am proud and humbled to know you and honoured to be one of your friends.

I wish you the speediest of recoveries and look forward to spending time with you in the future.

I’ve been listening to Gordon’s music for 40 years (!); it’s been with me through all the travels and ups and downs of my life; a constant that has always given me joy.

So to be able to spend a weekend with a lovely group of like-minded guitarists to receive guidance, instruction and words of wisdom from the maestro himself was just the best experience. Ever. Just to be able to emulate a few bars of Gordon’s unique music is so very satisfying. It was so encouraging and inspiring to be learning in such a friendly group like this; and even though there was a wide range of abilities, it really didn’t matter as we could all learn from and inspire each other.  I think we all took away some newfound skill and approach to playing Gordon’s pieces to build upon, and motivation of the kind which is hard to find sitting practising alone at home. Gordon has been so generous in sharing his music and actively encouraging and helping anyone keen to progress; indeed it seems to give him immense pleasure so to do. Gordon is a fantastically kind and helpful person which shows in everything he does, and I cannot praise highly enough the benefit and joy that this weekend gave to us all. I only hope that we can all ‘do him proud’ with our future playing!

My only complaint is that the weekend flew by far too quickly and I want to do it all again….. :-)    (Now, about that week in Crete everyone…..!)

During this inaugural masterclass weekend, Gordon spoke about the effect that his own guitar heroes had on him, mentioning that their music became a part of his DNA.

Well, I understand exactly what he meant by that statement, as his music is engraved on my soul.

A huge vote of thanks to Gordon, his lovely wife Hilary, and the talented Garry Burnett who also helped enormously.