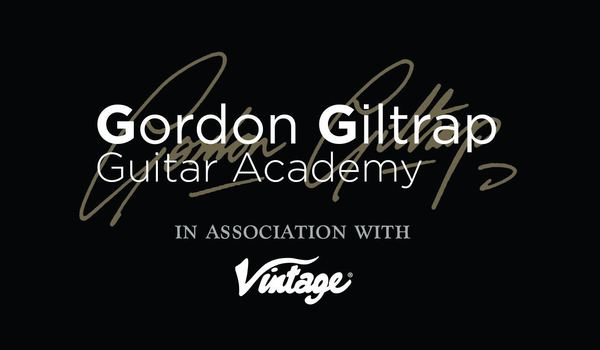 One of the world’s most accomplished and respected guitarists has just launched his own guitar academy.

Founded in 2015, the Gordon Giltrap Guitar Academy is an organization dedicated to the teaching of the acoustic guitar based on the repertoire of the acclaimed British guitarist - Gordon Giltrap.

The Gordon Giltrap Guitar Academy, in association with Vintage® Guitars (of whom Gordon has been a long time endorsee and Signature artist) will take place at selected venues around the UK as a series of 2 and 3 day intensive guitar study courses, concentrating on Gordon’s impressive back catalogue of compositions.

“This is a body of work I have built up over fifty years” says Gordon “and I want to share it with people - it’s as simple as that! I find the whole thing incredibly exciting!”

Created with the considerable input of Gordon’s longtime friend, fellow guitarist and Principal Tutor Garry Burnett, the Academy has aligned with the Registry of Guitar Tutors and London College of Music, who will independently verify and grade the pieces selected for study.

The Academy provides personal tuition by its RGT-Registered Academy Tutors and Masterclasses by Gordon himself in a relaxed and friendly environment. The programme offers a graded performance-based approach to developing a guitarists playing skills and repertoire learning to play and perform the music of Gordon Giltrap.

The curriculum comprises solo acoustic guitars pieces drawn from across Gordon's extensive career, which build a playing technique and repertoire of performance pieces second to none.

“These pieces have been offered on the RGT syllabus before,” says Garry “but until now if you wanted to learn a grade 8 piece like ‘Lucky’ or ‘Lucifer’s Cage’ for example there wasn't anyone apart for Gordon you could go to get tuition! Plus, with the legitimacy of the RGT and LCM, participants can get real life-changing qualifications that are recognised by educational bodies and employers, or UCAS points for university entry. We are looking at making the Academy a good teaching and learning model with good practice, clear targets, clear channels of progression and good teaching of a formal education standard.”

We now have David Mead on board as our special guest for Sunday 9th of our next weekend in April 2017. David was for many years the editor of Guitarist magazine and is the current assistant editor of Guitar Technical. David wrote the definitive biography of Martin Taylor and has published many books on the guitar.
He's a fine player and composer and has taught for many years. He has interviewed pretty much every major guitar legend known to man. He is also a Fylde guitar devotee and a nice man. It is a delight to have him as our special guest on the afternoon of the 9th

The Academy had its first official meeting, in Lichfield close to Gordon’s hometown of Sutton Coldfield, with longtime devotees of Gordon’s making the journey from around the UK to spend time studying and enjoying a very intimate masterclass from the man himself.

New members are very welcome to join and attend this and future meetings.