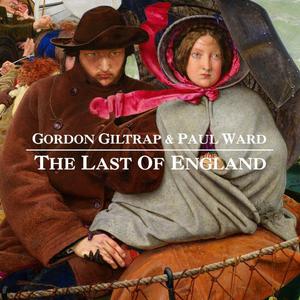 It's been a quiet month gig wise but still very busy with other equally pleasant things.

First of all, after much hard work and persistence, my darling wife Hilary has secured a relationship between ourselves and the Birmingham Museum and Art Gallery to display and sell the new album both CD and vinyl in their shop.


This makes so much sense with the strong association with the Pre-Raphaelite paintings that hang therein and THE LAST OF ENGLAND and Brotherhood suite.

I'm so proud of her for hanging in there after weeks of trying to get an appointment with their buyer and to make them realise how important this album is in terms of its inspiration from this stunning school of artists. Anyway the lady in question was lovely and THE LAST OF ENGLAND is now proudly displayed in their gift shop. Let's hope they sell a few eh!

An instrumental cd from Gordon Giltrap - the gifted guitarist who gave the UK a big hit record, 'Heartsong' in 1978 - teamed-up with talented keyboardist Paul Ward. Paul produces this pastoral music with fine violin playing by Ric Sanders on one track, 'A Promise Fulfilled' This uplifting album takes its name from an 1855 oil painting - 'The Last Of England' - by Ford Madox Brown. Both painting and record supply feelings of light & flight and deliver a promise of a better tomorrow beyond brush strokes and detailed liner notes. There is much Greensleeves and Lavender Blue in folk tempo - a delightful dilly-dally - the whole album acts as a whole and although each of the fourteen tracks bear their own names, such as 'April Love' and 'Sadie In May', the default position is always the ever faultless, 'The Last Of England'.

Yet another lovely SHARING DAY at my usual location, and what a lovely day it was with special guest Michael Gough setting guitars up for our guests and talking extensively about how he goes about building and setting up existing instruments.

Attendee Graham writes:
"There was a point in the late morning where I realised that this wasn't just about learning bits and pieces about playing guitar but an affirmation of how wonderful involvement in any music is and how life affirming it can be."

Also wonderful to have Paul Ward drop in and share his memories of creating THE LAST OF ENGLAND.

See some pictures and read all about it HERE

On the 12th of last month Hilary and I travelled up to North Yorkshire to a place called Cloughton near Scarborough to take part in a charity concert featuring Carrie Martin and Blaire Dunlop with myself as special guest. David Michael Ward who organised the whole thing did a fantastic job of promotion, unfortunately the British weather was against us and it rained most of the afternoon, which was a real pain as it was an open air event.

In spite of this at least a hundred souls braved the drizzle and showed their appreciation. As Hilary and I were staying over for a few days it made perfect sense to do a brief interval spot at our friends Steve and Kate Phillips venue at The Grosvenor Hotel every Tuesday in Fylingthorpe just up from Robin Hood's Bay. This venue has become quite famous over the years having had Steve's old pal from way back Mark Knopfler drop by a few years back and performed with him as part of a documentary on Mark's life and guitars. Since then quite a few musicians have graced the venue including Brendan Crocker and Carrie Martin and of course moi. My brief spot went down a treat and the audience were very attentive, quiet and respectful.

On the Sunday prior to the gig Hilary and I were treated to one if Steve's famous Sunday roasts. What an honour to be cooked for by such an immensely gifted man. Great blues artist, landscape painter, and guitar maker. Steve was in The Notting Hillbillies with Mark a while back, and in the early days Steve sold Mark one of his National guitars, which is the one on the Brothers in Arms cover. What an amazing claim to fame eh!

Our good friend Steve Phillips is selling three stunning instruments that he made a few years back. I have seen and played these beautiful guitars and they sound sublime. Mark Knopfler has some of Steve's guitars.....Need I say more.

Serious enquiries only please. Go to this link for more information. The other piece of news is that my son Jamie and his partner Karen were married on the 19th of August with our lovely grandson Braden in attendance, and he was such a joy and so well behaved. I was asked to play something at the registry office whilst the bride entered and whilst they signed the register.

Our pals Carrie and Darren Martin were with us to share the day. I decided to play Isabella's Wedding which I thought was very fitting. I felt so privileged to be there to witness such a beautiful event, and in the evening I was asked to play a short set, and then Carrie did a short set with me noodling away behind. We like to think we did the bride and groom proud. It was such a rare thing to get the family together in one place with my daughter Sadie living in Dorset but what a joy to have her there with her partner Gordon, my grandson Kieron and his partner Lauren, and my great grandson Elijah, and my other granddaughter Abigail, along with step daughter Rachael and partner Mylon.

Part of the afternoon at the reception was a very moving Pagan blessing given by a genuine Druid and his lady. It was truly lovely and we had never experienced anything quite like it before. This all made for a unique wedding indeed. Long life, peace, happiness and good health to Karen, Jamie and Braden. We love you.

Hope these photographs give you a flavour of the day at the beautiful Coombe Abbey.

I return to composing

Finally, after almost two years I have finally got back to composition. I'm currently working on a new tune to celebrate a special wedding anniversary for our friends Pete and Linda Bonner. It was Pete who has released the new album on vinyl on his Psychotron label. I hope to get the new piece recorded at my friend Mike Stranks home early this month. I love working with Mike who knows so much about recording with microphones and getting just the right sound. He has promised me FIVE microphones for the recording, so loads to choose from. Watch this space folks. Here is some advanced Carrie Martin news. Her new album is now finished and is a stunner, with special guests Oliver Wakeman, David Kal Cassidy, Elliott Randall....the legend, and me on a couple of tracks, one studio and one live of the same piece.


She also has other some other special pals playing on it whose names escape me at the moment but no matter, it is going to a wonderful release. The album is entitled "Seductive Sky". Carrie is also the proud owner of a stunning Fylde Leonardo guitar, a thing of sound and beauty. She still hasn't come down from the excitement of it all bless her!

Letter from Steve and Zoe Briscoe A few weeks ago my wife told me that she had seen a message on Facebook that Gordon Giltrap was selling a guitar.
Zoe suggested that I contact Gordon to ask about it, and I really didn’t hold any hope of success with it, but I did message him.
Within minutes I had indeed received a reply which turned into many messages back and forth resulting in our meeting and of my purchasing his beautiful Vintage GG guitar.

We arranged for the day to collect and visited Gordon and his lovely wife Hilary at their home and spent the morning talking and playing music and it gave me the opportunity of telling Gordon how he played such an important role in many of us ‘young’ people becoming inspired to pick up the guitar and play! and I will never forget the day that I heard Gordon on the album ‘Footsteps on the Sea’ with Graham Kendrick on second guitar and Chris Laurence on double bass and how we all sat down as young 15 year olds and listened to such amazing guitar work that would stay with me for the rest of my life. To this day I still talk about the ‘twiddly bits’ and could never work out how to do them.

That morning when my wife Zoe and myself visited Gordon we were greeted by two of the dearest and warmest people ever, and certainly not high on the pedestal of fame that so many are! So Gordon looks at me and says “Well there is the beast” as it stood in all its glory in the centre of the room. “Do you want to play, or shall I? Well, what do you say to that? To be in the same room as my teenage musical inspiration and to hear him play such beautiful music on the guitar that I am going to take home with me afterwards is nothing short of a dream come true.

Reflecting on the morning as we left, I began to think of the song that I played for Gordon, and strange how I chose to play a song from ‘Footsteps on the sea’ called ‘The Executioner’, because it was then that I thought “What a nerve, to choose to play a song in front of the man who played the original so so well”. I couldn’t help but think “Steve, that was sheer craziness, what was I thinking of? " Nobody could ever replicate the pure acoustic sound that was, and is Gordon Giltrap.

This is a day that that will stay with me for the rest of my life.
Gordon and Hilary thank you from the bottom of my heart. This is a recent acquisition, from a completely unknown maker called Graham Warren in Swadlincote Derbyshire. It is highly unusual being made of Yew wood which is highly figured and gives a very sweet and quite deep tone. I plan to record a new tune on it early this month. I shall be writing more about the maker later on, but in the meantime plan to have another of his sweet instruments in the future.