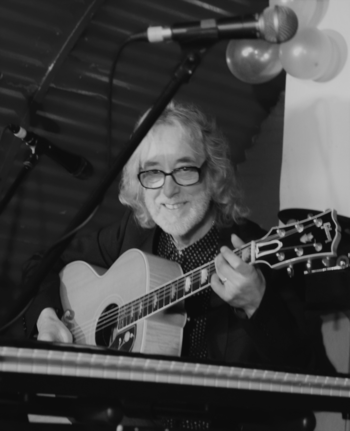 Hilary remarks all the time that although I'm not gigging at the moment the diary is still pretty full, mainly with social things but more than that I'm trying to put into place my teaching schedule much of which is clearly marked out on the website.

Just a word of sincere thanks to two very good friends. First of all thanks to Garry Burnett for all the help and advice he has given me and continues to give with regards to establishing the Gordon Giltrap Guitar Academy. He has always "kept the faith" in my music. His encouragement in helping me to forge ahead with my future teaching plans during this period of recovery has been invaluable. Thank you buddy.

Secondly thanks go to Michael Gough for all his help in organising the fine venue for our April Academy Teaching Weekend, and for creating the Academy website and for generally "being there" for me over the past few months. Thanks Mike.

After the success of my first "sharing day" I am so looking forward to my Academy weekend on the 7th of April. For some reason I had mistakenly quoted a figure of £350. This was in all honesty due to a rather muddled brain which I put down to my recent spell in hospital. The fee will be as before, £250.

I'm delighted to have that superb builder of bespoke electric guitars Michael Gough of MG-Guitars offering his service free of charge to all attendees of my Academy weekend who wish to have their instruments looked over by an expert and "tweaked" to make their beloved guitars play even better.
Check out Michael's website http://www.mg-guitars.co.uk/

Admin for both my Sharing days and Guitar Academy are now in the hands of Sue Holton, bless her. Sue is amazing to take on so much. She is indeed a one off and truly indispensable in our lives these days, but truth be told she always was, and without her we would indeed be pretty lost.

February has been a pretty eventful and enjoyable month visiting friends and attending a surprise 70th birthday party. On Saturday February 4th we attended the surprise birthday party of my amazing one time keyboard player Eddie Spence. Eddie composed the now legendary synth solo in the middle of Heartsong and has in its way become an iconic example of brilliant progressive rock keyboard playing ranking alongside the greats like Rick Wakeman and Keith Emerson.

The party was held in a small village pub just outside Wetherby and it was packed with old friends and family and was almost a who's who of my musical past with musicians that figured in my life from 1976 through to 1981. Graham Ward, David Ward, the brothers who appeared on that classic Whistle Test clip that BBC 4 often show along with Phil Warman and Eddie himself. Also in attendance was Shirley Roden who sang that amazing high solo on Innerdream from the Fear of the Dark album and other backing vocal duties, Weary Eyes for example and another Whistle Test appearance. Then there was Dave Macdonald who appears with me on my first ever Top of the Pops appearance again with Eddie.

During the course of the evening I was called up to play a couple of tunes and of course I had to play THE tune, and to my utter surprise and joy Eddie stepped up and volunteered to play THE solo which he did note perfect. I felt a shiver of excitement and energy run through me at that moment, and it gave everyone there a moment to remember. I'm sincerely hoping that there will be some photographic evidence sent through that captured the magic of that evening! In the picture above I'm playing the Gibson J200 for the first time in public, the one that was gifted by Pete Townshend. The following day we gathered at the Spence household for tea and cake before journeying on to stay with Big Roy Coleman and his lovely wife Liz in their beautiful cottage under Roseberry Topping. Yes, I did write a piece of the same name a few years back inspired by that very place!

The time spent with Roy and Liz was truly memorable and whilst in the area, we visited old friends Vin and Pat Garbutt. Vin of course is a national treasure in the folk world and is probably one of the most loved performers working on the Folk Scene today. A fine singer and unbelievable whistle player and one of the funniest men on stage, ranking alongside Billy Connelly in my book. Vin has to undergo major heart surgery soon so we all wish he and Pat love and best wishes for a speedy recovery once the deed has been done.

Photo above left to right me, Liz, Hil, Pat Garbutt and Vin

One of our days out was spent at Robin Hood's Bay and whilst there we were invited to drop in to see the legendary blues singer and guitarist Steve Phillips. Many will know Steve's association with Mark Knopfler, in fact he and Steve go back donkey's years well before Mark became the mega star that he is today. We all know the iconic image of the National guitar featured on the cover of the Brothers in Arms album, well that guitar was once owned by Steve who sold it to Mark who has used it on numerous recordings, the most notable being of course Romeo and Juliet. Steve, apart from being an outstanding blues musician and one time member of The Notting-Hill Billies, who had enormous success a few years back with Mark at the helm, he is a brilliant landscape artist and builds superb guitars. Every Tuesday night Steve can be seen playing with his band The Rough Diamonds at the Grovesnor Hotel up from Robin Hood's Bay, and on the 7th March I'm going to be making a special guest appearance there with Steve and the lads. It is free admission so who knows what will happen, either way it's going to be fun.

In May Steve is getting married to the lovely Katherine who we met at the Post and Toast cafe at the bay. She works there part time but her real job is as a guitar builder and repairer. It is such a small world because when she found out who I was she revealed that she had worked on some of my guitars when she was a guitar tech for JHS, the company that produced my signature series guitars and associated instruments. She is a lovely lady who is SO in love with Steve that she has declared her love for him in the form of a tattoo on her arm. Romance lives!

Our thanks go to Roy and Liz for being such fantastic hosts during our stay and even indulging my desire to do a spot at a singers night at a hotel in Saltburn the very venue where they had their wedding reception many years before! Guitar of the month is this lovely little Paul Brett Viator 12 that is strung with unison strings as opposed to octave tuning on the lower four pairs as per a conventional 12 string. It has a very sweet sound and I'm currently playing it with the strings that came with it but I'm sure I shall tweak it a bit at a later stage.

THE LAST OF ENGLAND continues to garner wonderful reviews and is continually going up and down the Amazon best-selling album chart. It still requires major exposure to truly break through to the listening and discerning music loving public, and I just know deep down in my heart and soul that once heard this music of ours (Paul Ward and I ) will touch people’s lives with its healing and timeless quality. There I have said it! As I write this, within two hours Gavin Coulson (left) and Gary Barlow...( not THE Gary Barlow ) will be here to film me playing various GG related instruments including my new Fretking GG Elise, the new Roger Williams designed electro acoustic classical (a wonderful instrument) a Paul Brett Viator 12 string and a Danelectro Baritone guitar. So, it promises to be a busy day but hopefully a fun one.

Update - I'm pleased and relieved to report that the mornings filming went well. I recorded extracts from Ania's Dream, On Camber Sands, The Last of England, and The Dodo's Dream. The purpose of the filming is to have them on the JHS website relating to specific instruments in their catalogue, also to be included in social media.

My Sharing Day on February 25th was a great success. Just look how many turned out for it. Here is a pic to give you a flavour of the day. More details, pics and reviews can be found in the Sharing Day section HERE and HERE

Thanks go to Nigel Bates, Carrie Martin, Geoff and Cath Basilio, Mike Stranks and of course my lovely Hilary.

Players came from near and far. The farthest being my dear old friend Colin Welfare who traveled all the way from the Isle of Wight.

This bodes well for more of the same and hopefully will be a taster for my Academy Weekends. A final reminder about my Academy Weekend in April. Spaces are filling up so don't wait too long to book your place. www.giltrapacademy.org.uk

Be well my fellow strummers.

See you all next month.