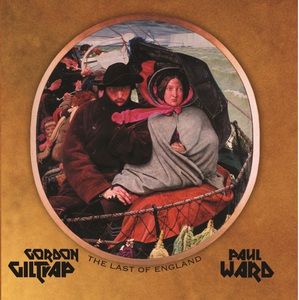 I know it's a bit in advance but I thought I would let you all see the cover of the new album. The image is a Pre Raphaelite painting by Ford Maddox Brown. The title is THE LAST OF ENGLAND, which some may be familiar with from previous incarnations on past albums, but I can assure you that this release is the definitive version. I shall be writing more about the album in detail when it's released in January but wanted to give you a taster now. All I can say is I believe it to be my finest album to date and is truly a collaboration between myself and Paul Ward without whom it would not have been possible.

These two beautiful instruments were used exclusively on the new album THE LAST OF ENGLAND. This beautiful lamp created for my 40th birthday by my lovely Hilary is also on the inner sleeve of the album. This lamp is a replica of the one that Holman Hunt had made for his iconic painting THE LIGHT OF THE WORLD.

All readers of my news page will know how much I love tinkering with guitars and whenever and wherever possible if I see a guitar no matter what it is or how expensive or inexpensive, I feel it's worth the time and money I will give it a go and try to make it " better".

So, there I was in our local charity shop St Giles Hospice in Mere Green. St Giles is a charity that is close to my heart anyway as I have fund raised for them and have developed some meaningful and deep friendships with people there, especially Julie Nicholas and Kim Quance. The guitar in the picture had been there for several weeks without any takers, and I think it was because it was basically unplayable. The first string was completely dead as it was lying flat on the fingerboard due to the top nut being worn down. The machine heads were pretty bad and the string action pretty high, but when I strummed it the sound from the other strings was quite sweet.

I bit the bullet and handed over the £25 and within a few days set about putting it to rights. First off I replaced the worn machine heads. I then set about changing the plastic saddle for a bone one and adjusted the action at the bridge and the truss rod to help get the strings closer to the fingerboard. I then filled in the top nut slots and re cut them. Some of the frets were a bit rough, in fact VERY rough, so I smoothed those out and polished them. Finally a new set of strings were fitted and tuned up to pitch, and hey presto it started to sound and play like it should have done the day it was made.


The make of the guitar is a COUNTRYMAN and has a laminate top which should in theory make it sound duff, but it doesn't. My memory of the early Yamaha FG180's which were of laminate construction sounded wonderful, so that quashed that theory.

I now have a very nice guitar that would suit any player and more so a beginner. The plan is to somehow raffle it off for St Giles and in so doing raise some more money for this worthy charity. It gave me great pleasure fixing it up and took my mind off health issues for a while.

On the 5th of November I took part in a small fund raising event for my friend Gary Winterman at The Leopard pub in Doncaster. The venue is apparently a well thought of one on the rock circuit featuring a few legendary name appearing there throughout the year like Wilco Johnson and the like. On the bill was our dear friend Carrie Martin and Gary of course with his duo Stainton and Winterman plus a few more local acts. It was a fun evening and great to see old friends like Big Roy there, and Geoff and Cath Olner plus Adam Parrish. A goodly sum was raised and a nice memory created. Solo's coffee house was the venue for a "shared" evening with Carrie Martin in front of a small but select audience. Willerby is a charming place just outside Hull and the venue is absolutely charming and serves the best food to be found anywhere.

The format of the evening was Carrie and I on stage together doing her songs and my pieces alternately. There were no stars that night, just two friends sharing music and having a great time. All being well we may repeat the event next year.

It was fun to do and low impact on me, that's for sure. I even managed to play The Dodo's Dream on my new pedalboard without too many hitches!

The following day Carrie, Hilary and I drove across to our favourite distribution company JHS for a photo session for my three new instruments. My new GG Fret King Elise, the new Roger Williams classical and the pre-war Mandolin. At first I wasn't sure I was up to having images taken bearing in mind I'm just six months out of surgery. Fortunately I felt OK and looked reasonable much to my surprise so all went well. The results will be seen at some point in magazines and in the GEAR magazine.

On the evening Carrie arranged an interview with a local radio station just outside York the name of which escapes me...please forgive me, but it all went well and the host Big Tony was charming. Here is a pic of my good friend Andy Smy who is now the proud owner of an ex GG Fret King.

Andy is a lovely man and this old geetar of mine has gone to a good home. Had a lovely day with my friend Michael Gough of MG GUITARS on Wednesday the 23rd. Michael is a lovely person and makes the most beautiful hand built electric guitars at unbelievable prices. I hope to add one to my collection very soon.