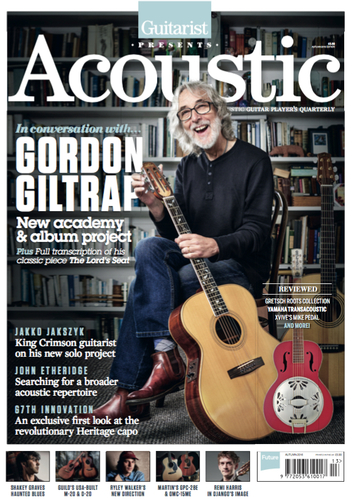 By the time you read this the latest quarterly issue of GUITARIST presents ACOUSTIC will have hit the stores with yours truly on the cover and an in depth interview with David Mead and a rather jolly image of me on the cover. I feel very honoured to be the featured artist and hope all you who purchase a copy will enjoy its contents.

You can get it at any WHS or good local newsagents.

I was thrilled to be giving my morning masterclass at this lovely intimate show. I played and chatted for 45 minutes about technique open tunings and the history behind most of my popular pieces including, HEARTSONG, DOWN THE RIVER and ROOTS.

My good friend Nev Martin introduced me and mentioned some nice stories from our long friendship. He told me he thought I played well on the day which lifted my spirits no end.

I was delighted to be invited by my pal the great Clive Carroll to be a guest at his guitar workshop in the Cotswolds last month. Here are a few pics for you to look at. John Etheridge and Ray Burley were also guests at subsequent events spread a few days apart. I loved every minute, the people, the venue, everything. After a long break from releasing a new album I have finally found a home in Angel Air records for my latest offering THE LAST OF ENGLAND.

All brand new recordings with my friend and collaborator Paul Ward a brilliant sound engineer and musician. Between us we have created what I believe to be my best offering of late.

As I write this we are still completing tracks but plan to have the album ready for release in early 2017.

I will have more detailed information on the tracks and running order by next newsletter.

One of the world’s most accomplished and respected guitarists has just launched his own guitar academy.

The Gordon Giltrap Guitar Academy, in association with Vintage® Guitars (of whom Gordon has been a long time endorsee and Signature artist) will take place at selected venues around the UK as a series of 2 and 3 day intensive guitar study courses, concentrating on Gordon’s impressive back catalogue of compositions.

“This is a body of work I have built up over fifty years” says Gordon “and I want to share it with people - it’s as simple as that! I find the whole thing incredibly exciting!”

“These pieces have been offered on the RGT syllabus before,” says Garry “but until now if you wanted to learn a grade 8 piece like ‘Lucky’ or ‘Lucifer’s Cage’ for example there wasn't anyone apart for Gordon you could go to get tuition! Plus, with the legitimacy of the RGT and LCM, participants can get real life-changing qualifications that are recognised by educational bodies and employers, or UCAS points for university entry. We are looking at making the Academy a good teaching and learning model with good practice, clear targets, clear channels of progression and good teaching of a formal education standard.”Created with the considerable input of Gordon’s longtime friend, fellow guitarist and Principal Tutor Garry Burnett, the Academy has aligned with the Registry of Guitar Tutors and London College of Music, who will independently verify and grade the pieces selected for study.

The Academy has just had its first official meeting, in Lichfield close to Gordon’s hometown of Sutton Coldfield, with longtime devotees of Gordon’s making the journey from around the UK to spend time studying and enjoying a very intimate masterclass from the man himself. In addition to this Gordon’s latest Signature guitar, the Fret-King ‘GG’ (FKV3HGG £999 UK rrp) has just started to hit the stores in the UK and the Vintage Roger Williams Nylon Electro Acoustic Model (VE9000RW £599 UK rrp) - based on an original design by the celebrated luthier and also endorsed by Gordon (“A stunning sounding guitar acoustically, and with a great Fishman INK+ preamp and pickup system too!”) will be available in mid-October.

Finally, as if he wasn't busy enough, Gordon will be releasing his latest solo album ‘The Last of England’ on the Angel Air record label in early 2017. “It is all good, solid material with the emphasis on melody.” says Gordon. “It’s a very romantic collection of tunes, because that’s what I’m all about. I’m a great devotee of people like Vaughan William's and Elgar - composers who were very much about melody…and that’s what I do. I’m a melodic writer for the guitar. When you hear this music it does have an orchestral feel to it, and lends itself to a much bigger picture.”

The following pictures were taken at my second teaching event. It was really a reunion for the folks who attended last year’s event in Buxton. This has really kick started my GORDON GILTRAP GUITAR ACADEMY being run by my good friend Garry Burnett.