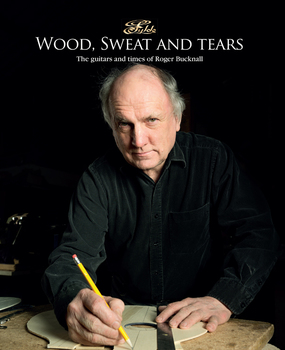 I'm devoting this month’s news to my dear friend Roger Bucknall and his fantastic guitars.

Because of my current circumstances future NEWS page won't be quite as regular as before but rest assured any of the important stuff will certainly get an airing within its pages.

So for the time being I hope you enjoy this month’s feature on a man who I consider to be one of THE great guitar makers of our time.

This will be no mere Anorak indulgence but a brief history of two good friends who have known each other for almost as many years as my children have been on this earth.


You shall be viewing photographs of current Fylde guitars that I have the pleasure to own, use in concert and record with. One of the guitars is currently owned by Sir Cliff and has been on loan to me for a number of years now. I have been trying to find an opportunity to return it to him but circumstances have prevented this from happening, but I'm sure something will present itself in due course, so for the time being it currently resides with me. My GG Signature Fylde was recently with the great man having its 15 year service. Yes, 15 years of solid playing, I can't believe it.

I felt very honoured to be the first Fylde player to have their own signature guitar out on the market.

It is now back with me and sounds even better than ever, in fact I recently used it to record a commissioned piece and it sounded superb. This is a short scale instrument and is SO easy to play. Once again I have gigged and recorded with this guitar.

The history of this guitar is quite extensive.

Roger made this in his garage when he was living in Lytham St Anne's. This guitar was made before the Fylde name existed and has a hand written brown label inside dated 1973. The instrument you see before you today was lovingly restored by Roger for my friend Garry Burnett who I sold it to several years ago. It was in a pretty bad state of repair and Roger at that time was so busy building that he didn't have the time to restore it, but several years later Garry rang him and for whatever reason he relented and fitted a brand new table to it and generally brought it back better than new. Garry very kindly sold it back to me.

This guitar represents a lovely memory of my son Jamie when he was only three years old, and many of you I'm sure will remember that 73 Phillips album with me on the cover with this very instrument and some beautiful photographs of Jamie and I on the back cover blowing bubbles.

I have learnt over the years the importance of keeping special instruments with special memories attached to them so I consider myself very fortunate to have this guitar in my possession.

These fond memories don't apply to all my guitars, and I have some here at home that represent a huge chunk of my recording and playing life but are sadly tainted, and as wonderful as these guitars sound I have no desire to have them in my home.

I’m delighted to say that my friend Andrew Davies is now the proud owner of one of those instruments, and Clive Carroll is the owner of another along with my friend Martin Green who also now owns another of those aforementioned instruments. This lovely 1976 Fylde 12 string was gifted to me by an old friend (thanks Jeremy) who told me that I was with him when we visited Roger's old workshop in Kirkham to order it.

It is a wonderful sounding instrument. I have used it on stage and in the studio particularly on “Maybe Tomorrow”, and ”Ravens will fly Away” from the Ravens and Lullabies album.

I had a small hand in the design of that lovely tapered headstock. Yes, a VERY tiny contribution to the genius of Roger Bucknall.

If ever there was an instrument that bears testament to the outstanding craftsmanship and design of one R Bucknall then this has got to be it.Loosely based on a Gibson J200 this 1975 work of art is very pretty indeed. It features the most beautifully figured Rio rosewood for the back and sides, and the silver and pearl inlay is just stunning. I used this guitar on HEARTSONG and much of my ELEGY album. I loaned this guitar to Sir Cliff for a Palladium show in the late 70's. He fell in love with it. I did an interview with him for Guitarist magazine in I think 1995 and brought the guitar along to remind him of that time. His eyes lit up when he saw it and said that one day he was going to get one made just like it.

Cliff and the Shadows were early heroes of mine so I thought it would be nice to see if he wanted it. Needless to say he accepted and has been the owner ever since.

There is that one and only clip of me on TOTP playing the beast, or more to the point, miming with it! This beautiful guitar already has a huge GG recorded history associated with it.

I used this guitar for much of Brush And Stone with Rick Wakeman and again on the album Ravens And Lullabies with Oliver Wakeman.

It has the usual scalloped truss rod cover for easy string bending behind the top nut. It is based on a guitar that Roger made for me in the late seventies which I had restored by another maker.

Many years later I sent the original top off to Roger who studied the strutting and produced what I regard as one of my finest instruments.

Very recently my friend Nick Hooper, the man who wrote the music for three Harry Potter movies visited our home and tried out my Fylde collection. He too fell in love with this guitar and ordered one that very afternoon! I became the owner of this guitar last summer.

This guitar represents SO many things to me.

Firstly an enduring close friendship that has lasted over forty two years and an instrument that has been in gestation for nearly four years.

Eventually this outstanding guitar will start gracing the stage and recording studio.