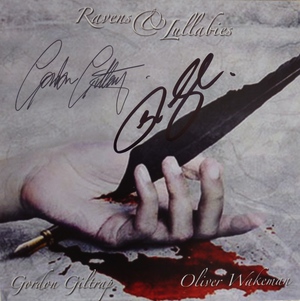 The Ravens and Lullabies album is as you know due for release on the 4th of this month and should be out there by the time you read this.

The first 1000 copies are the special edition ones with the bonus material. In order to make this a bit different and special, new artwork is being used for this run only, and the record company came up with the bright idea of Oliver and I signing each one. Great idea in theory but in practise VERY brain numbing and time consuming BUT it had to be done! So, low and behold I received in the post 1000 plus sleeves for me to sign, then re-package and send off to the Wakeman.


I can’t begin to tell how strange it is to sign one’s name over a thousand times. It really does make you think about how you write your signature. The pile looked incredibly thick and after the first half hour the pile didn’t appear to be diminishing. EVENTUALLY after a period of signing over two days I finally got it done and in the post to Oliver. I didn’t envy him the task in-between his busy life as a new Dad and preparing to move house yet again and then on top of all that finding the time re-acquaint himself with the album’s material and the material we played on the September tour. Needless to say he did it, but like me found it quite a task.

Let us put things in to perspective, there are FAR worse things that one can do than sign ones name a thousand times, and at the end of the day it is all in a good cause. We now await the public reaction to the album. We have fingers and everything else crossed and we live in hope that it will be a great success. We know its value. It is just a case of the great wide world out there sharing in our belief. Watch this space as they say.

Oliver and I have just embarked on the next leg of our tour to coincide with the album’s release. A major UK tour is being planned for later this year and part of the tour will include gigs as “special guests” of Barclay James Harvest.

These will be interesting because in the good old late seventies I was managed by the same company that managed BJH. We hope it’s going to be enjoyable.

The rest of the dates will be with the vocalist Paul Manzi who sang on seven of the songs on the new album. I’m really looking forward to working with this great singer, and what a departure that is going to be for me! The Barclay James Harvest was finally fully formed in 1967 and were progressive and experimental from day one, utilising orchestral ensembles and breaking away from standard methods of songwriting, just as The Beatles had done on their groundbreaking 'Sgt Pepper' album.

From the '70s through to the '80s, they enjoyed wide commercial success, earning them a place in the prog hall of fame and numerous worldwide tours. John Lees' Barclay James Harvest is the modern incarnation of the legendary progressive rock band, led by vocalist and guitarist Lees, who co-founded the group in 1966.

A hugely popular live act throughout Europe, BJH once played an open-air show in Berlin to an audience of 250,000.

It was SO good to see a posting on Twitter relating to a concert that my friend Raymond Burley did on Saturday the 9th of February with a visiting violinist at a church in Oxford. The posting said words to the effect. “Just attended a concert in Oxford, Ray Burley was fantastic, and my now favourite instrument to go with a guitar is a violin”.

Really good to see superlatives relating to this outstanding musician and good friend. Well done Ray and long may it continue!

I have a new project and website planned for what I believe will be a significant move forward in my career. A new website is being built specifically to focus on the musical instrument side of my life. For many years now I have used a number of very fine guitar shops to sell my pre-loved instruments, and by and large they have done a great job. This year I plan to sell my music related goods via this new website, which will in reality be an online shop. Anyone wishing to look at my guitars with a view to purchase can make an appointment and chat to myself and my friend Trevor Jones in person about the instrument they are interested in. This makes the whole affair that much more personal, and I think people will welcome that.

We have great plans for this new venture and will speak more about it in future News items and on the website generally. This new site WILL NOT replace my current website but will be a completely separate entity.

If you haven't yet joined Guitar Practiced Perfectly then now is a great time. These will hopefully be interesting and informative to you and will include;

Interviews with famous and up and coming guitar players, by Gordon Giltrap
Short lessons
Practice ideas tips and routines

Our first interview is with Stuart Ryan.

"Described as "One of the finest guitarists of his generation" by Martin Taylor MBE, award winning guitarist Stuart Ryan is regarded as one of the UK's finest exponents of the instrument. Stuart is known to thousands of guitar fans throughout the world thanks to his monthly columns in Guitar Techniques Magazine.
Stuart is Head of Guitar at The Bristol Institute of Modern Music BIMM Bristol), sister college to the famous BIMM Brighton".

Here are the first three videos featuring Stuart, one interview and two songs;

Next week we will be posting another three videos followed shortly by a series of videos by Gordon Giltrap covering all aspects of his song Dodo's dream, including his use of the loop station.

My lovely agent Sue Webster is back in harness again...please forgive the terminology. We have MANY plans afoot for this year including a back to my roots campaign with a return to doing gigs in selected folk clubs throughout the UK. I started my professional life in this arena along with many legendary names in music like Mike Oldfield, Bert Jansch, John Renbourn, Billy Connelly, Ralph Mc Tell, Cat Stevens, John Martyn...The list goes on for a long way.

I have to a degree avoided doing the clubs because quite frankly I didn’t think the folk community would want me or even welcome me because of my dalliance with Prog Rock. After the meeting with Sue Webster who represents pretty much the cream of folk musicians in UK, I was told that this wasn’t the case and many would welcome me with open arms. I look forward to playing at a folk club near you now and in the foreseeable future. You never know I may get that Radio 2 Folk Award yet !

Many of you over the past few years would have seen me perform many successful concerts in village halls dotted around the UK. You will also know what a great fondness I have for these venues with their local communities and their stripped down honest approach to bringing artists of long standing “out to the sticks” so to speak. Pretty much every village in the UK has its own village hall, and I bet there is one close to you!

How do you feel about approaching your own local village hall committee about booking a certain Gordon Giltrap or Giltrap & Burley to perform there? Many of these halls are under used and many are quite lovely places to play. I have written some of my finest tunes during sound checks at these venues and I find them quite inspirational. This is all part and parcel of my desire to continue playing in intimate venues and selected folk clubs.

This is a bit special! Made for me by Roger Bucknall in 1973, in his garage BEFORE he became Fylde Guitars. This was the very first 12 string he had ever made. When I received it, I took it out of its case and just strummed it, its sound was SO beautiful I began to cry and felt deep inside that I was not worthy of it. I know what you’re thinking... silly romantic fool, but I genuinely felt that emotion at the time! It ultimately fell apart and I had several people attempt to restore it, and to a degree they did but it wasn’t the same. My dear friend Garry Burnett wanted it so I sold it to him for a modest sum which is really irrelevant and I for the life of me I can’t remember. He then after many years took it to Roger who completely rebuilt it and returned it to its former glory. I was lucky enough to get it back a couple of years ago and here it will stay.

It represents a huge part of my history and my son’s history because he was featured on the cover of the album where I used the guitar on a number of tracks. It then went on to be featured on quite a few GG recordings significantly From the Four Winds from the Visionary album and Inner Dream on the Fear of  the Dark album, I also gigged with it for many years and have recently used it on stage. I think I shall keep it for just home use now as it’s too precious to take out. Just look at these photographs. This guitar was built by a genius and is as beautiful today as the day it was made. My dear friend Roger got it right way back then and continues to this day to make some of the greatest guitars on the planet. He recently unearthed a film of Paul McCartney playing a Fylde. It doesn’t get any better than that in my book, and I’m SO pleased for Roger. The album cover is from my 73 GILTRAP album. Love the vest !

Footnote: our apologies if you are currently viewing this page on an iPad or iPhone and the images are upside down / sideways - we are investigating the cause, it seems only Apple equipment is affected.