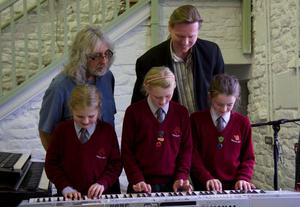 What an amazing month this has been. MANY highs, so many I really can’t recall them all now but suffice to say, things are moving along quite nicely thank you.

The main news for this month is of course the Ravens and Lullabies tour, and it would be unfair to pick out specific dates as they have all been special in their own way. Special because of the friends and family who have made the effort to come and see this fledgling duo of ours.

I remember saying at the outset that this new venture had put a lot of pressure on this old brain of mine, but I’m delighted to say that I‘m handling it quite well, but that’s not to say that it’s an easy gig, far from it, and each night represents a brand new learning curve for me, but I like to think that I’m rising to the challenge.

You will already have read some cracking reviews of the shows from various folk, Keith Meredith for example, but here are a few more for your delectation, cherry picked by our beloved Sue Holton.... over to you Sue!

Excerpts from Ravens and Lullabies reviews

I must admit that I didn’t quite know what to expect of this gig - but in very short order I was captivated and mesmerized by the sounds presented to my grateful ears. The music bounced from calm and relaxing to stimulating and exciting and then back again – this new collaborative venture richly deserves success and a much wider audience.

Individually, both Gordon Giltrap and Oliver Wakeman are exceptionally gifted musicians and composers – capable of producing joyous, thoughtful, emotional and exciting music. When their talents are combined in the way they are in this collaboration, then the results far outshine the sum parts. Each complements the other’s talents to produce a unique performance.

What a wonderful evening and experience to have been entertained by such consummate musicians who know exactly how to reach their audience and, clearly, enjoy themselves as well.

I read a couple of days ago of the imminent Rolling Stones concerts and the ridiculous prices being asked for tickets - that is from official sources. If you enjoy quality music, quality performers and, simply, a magical evening, you can do that at a tiny fraction of the cost with Gordon & Oliver's 'Ravens & Lullabies'.

Great night out, two super musicians in complete harmony with themselves, the sound was excellent and the album is now on my wish list and I await it with great anticipation.

The set seemed to go from strength to strength and everything about the concert worked extremely well, Gordon and Oliver’s playing together, the solo pieces and of course the excellent banter and interaction with the audience. Also, no egos here, just great mutual respect between two great musicians which led to many moments of unforced musical magic during the evening.

After two delightful concerts at the Hunter Hall School in Penrith Hilary and I drove to Wales for my appearance at the first ever Llyn Guitar Festival.

What a stunning Festival location and what a line up of artists for the weekend. The highlight for me was classical guitarist Gary Ryan’s concert in the local church on Saturday afternoon. His performance was spellbinding and he must rank as one of THE great classical players in the world right now and on top of that a great guy with a fantastic sense of humour. We had such a great time one evening after our concerts with that other outstanding young guitarist Stuart Ryan (no relation). It had been a while since we had seen Stuart and since then he has just got married, so congratulations to him and his lovely bride Corrie. Speaking of congratulations, Hilary and I received an invitation recently to Clive Carroll’s wedding!!!

Back to the festival... Other artists appearing were Paul Brett and that great jazz guitarist Andy Mackenzie. I can’t praise Paul and Andy high enough along with Michelle Breeze, for all their hard work in creating what I believe will be one of THE major guitar festivals in the calendar in years to come. Hope I get invited back!

P.S. The staging for the concerts featured some lovely tapestry material for the backdrop which happened to be the same material as our front door curtain! I told Michelle Breeze who supplied this and she said she had been looking for years for more of the same pattern but no joy. I said I had two more full length curtains that were surplus to requirements that she could have. She was overjoyed, so, job done!

Guitars For Sale Plus Bits And Pieces

I have been having another sort out and have placed some guitars plus odds and ends with my friend Stu Field’s shop in Worcester. Google the Guitar Cavern Worcester for more info.

My friend David Crozier is moving to new premises in November to Eastbourne. The new business will be called David Crozier Guitars. He still has many of my guitars for sale, so do check him out. He’s a great guy and has a HUGE passion for what he does. We wish him well.

Guitar of The Month

This is an interesting one with a sad little history. This was the guitar I bought from my friend Steve’s shop Chrystal Clear Music in Garstang a while back that sadly had to close. I have always loved Telecasters and this one although a relatively new guitar has a certain magic and feel to it.

It really is a  ‘bitsacaster’ but sounds and plays beautifully and I just love it! The body is made by a USA company called Iron Horse guitars. The neck is from a Mexican Tele. The neck pickup is a Trev Wilkinson one and the bridge is a Seymour Duncan model. It’s as light as a feather and sounds really sweet. I think this one is a keeper!

The Passing of Big Jim Sullivan

I was SO sad to hear of the great man’s death. I had known Jim for many years and had the pleasure of playing his club in Coolham many times, in fact the last time was earlier this year.

Sadly Norma his wife had decided to close the club shortly after I played there, I think because Jim was quite poorly and very rarely made an appearance. It had been at least three years since I had seen Jim and even then he was struggling with his health. The club was initially started because of Jim.

It has been documented hundreds of times what a great musician he was, and in fact if anyone should have been referred to as a “legend” it was Big Jim.

We shall never see his like again. RIP Jim and our love and thoughts to go out to Norma and the family at this sad time. Hilary and I had been invited to the funeral but time and circumstances wouldn’t allow it, otherwise we most certainly would have been there to send the big fella on his way.

I still retain a lovely memory of Jim playing along to “Down the River” one night at the club when I was the booked guest. He hadn’t heard it before and just asked what key it was in. When he started playing it was just sublime. An outstanding guy in all areas and a very sentimental person. He will be greatly missed. GPP is going from strength to strength. I spent a day in our studio filming a very detailed version and breakdown of The Dodo’s Dream. This will form part of a multi chaptered tuition feature for our website, and will I’m sure appeal to all followers of my music and guitar players generally. We have plans to have invited guests in the studio, the first one being that outstanding guitarist Stuart Ryan who will be making an appearance in December. Other names lined up to visit our Staffordshire studio are David Mead, Nev Marten and many more. Guitarist magazine have chosen my Fret King GG Elise electric guitar as one of their top 6 guitars of the year, alongside the likes of Fender, PRS and other big name makers. This is fantastic news for myself, Trev Wilkinson its designer and of course JHS.

Being essentially an acoustic player I still can’t get my head round the fact that I have an electric model associated with me. Thank goodness for Loop Stations and The Dodo’s Dream. You never know, we may have another award winning guitar on our hands. As I have been known to say many times....WATCH THIS SPACE!

You can read their comments HERE

JHS photos and report from China

I received a lovely e-mail from Paul Smith, one of the directors at JHS, updating me on his recent  visit to the factory in China.

Take a look at the interesting pictures. Paul says that the attention to detail before shipping is really good, and fills me with hope and a small degree of excitement about the release of this wonderful new GG signature guitar onto the market in 2013. Who would have thought that a chance meeting with Dennis Drumm the MD of JHS a few years ago at Ivor Mairants shop in London would lead to an award winning guitar and the complete range of GG related instruments including the Fret King GG Elise, that has just been chosen by Guitarist magazine as one of its top 6 guitar for 2012.


This really is the stuff of dreams for the boy from Deptford!

By for now and I’m sure there will be more Ravens and Lullabies news next month.