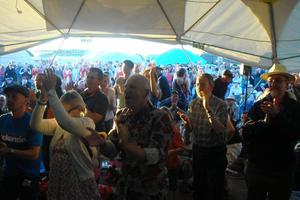 The summer is always a quiet time for gigs. There are of course the usual festivals, but for some reason I have never been fully accepted on that circuit. I don’t think I’m perceived as a festival act, but all those who have seen me, particularly at the Uttoxeter show know that the opposite is true! Anyway the point is there are no show reports for this month’s page BUT, it really has been a busy time with preparation for the Giltrap/Wakeman tour.

I mentioned last month that the rehearsal period was looming for Oliver and I and our first day was in the diary. We are rehearsing at a location provided by a good friend, and the location couldn’t be better, set in a lovely Warwickshire village. This is a particularly tough time for Oliver as he is now a proud father to baby Lottie, the down side being of course NO sleep! Given this situation Oliver has done wonderfully well, and it is going pretty well.

There is a lot of new material for both of us to learn and get under the fingers. We are both perfectionists and want to make this tour, and of course the forthcoming album really special.

I think we are both at a crossroads in our respective careers and the coming together is probably for me one of the most important collaborations I have been involved in for some time and on many levels.

I have always sought new challenges with my music, and never want to be seen as someone who just sits back on their laurels doing the same old thing. This of course becomes increasingly more difficult with the onset of older age, and if I’m perfectly honest I wonder why I put myself through this, but I do and that is the nature of the beast. One has to grab these opportunities when they come along and life is far too short to let those golden moments pass one by.

Let us hope there will be many golden moments on stage with this remarkable musician named Oliver Wakeman.

We were hoping that the album would have been completed in time for the tour and at this stage it’s looking doubtful. We have had a number of meetings with certain parties who expressed an interest in financing the project only to eventually change their mind, thus wasting everyone’s precious time... hey ho.

This album will be released, and when it is I promise you it will be something special and full of a few surprises. It will be a real Progressive Rock album in the true sense of the word, highlighting both of our individual gifts!

Just to give you an update on this exciting new project, a day was set aside for filming the first of the lessons plus the usual greetings to cameras etc. It went brilliantly well. Once new photographs have been done and the updated site is complete we shall launch the software properly.

Ritchie Blackmore has given me a glowing testimonial for the site. I was completely blown away by his kind words and would like to share them with you here:

Anyone who asks me knows that I think that Gordon Giltrap is one of the best acoustic guitarists in the world. He was always way ahead of his time. He certainly gave me lots of hints into what strings I should use, pre amps,- one of which bears his name I use a lot- and how to approach the acoustic guitar as opposed to the electric guitar.

He's also very witty. And I love the fact that he has not cut his hair.

I don’t know quite what to say when players of Ritchie’s stature heap this sort of praise on me. I guess it gives me a warm feeling inside, but really makes no difference to my own inner feelings of insecurity about my abilities, but in some ways, it’s those inner feeling that drives one on to do better work I think. Most of the great players I know feel the same, and it’s not an uncommon thing. Guitar Of The Month

This lovely Guild guitar is brand new and was acquired from my friend Howard’s shop Oasis Music in Ringwood a month or so back. Do drop in to the shop if you are in the area. It’s a cracking shop and the acoustic section, which is in a separate building is a joy to be in, and is the perfect setting for just enjoying his wonderful selection of instruments. I of course played a concert for shop on the 24th of last month and great fun it was too. I shall do a report in next month’s news page.

I have always had a high regard for Guild’s and feel that they have never received the sort of praise usually reserved for Gibson and Martin guitars. This guitar is outstanding and is the same model as the one that Paul Simon used at the beginning of his career. To me this instrument ranks alongside any of the guitars I own, but in its own unique way.

I’m pretty certain that this Guild will find its way onto future GG recordings that’s for sure.

Speaking of great guitars generally: I have in my home some of the best guitars you could ever wish to play, but you know a lesson that came home to me a few years ago after doing that Purcell Room concert with the outstanding Virginia Luque, is that at the end of the day it’s not just the guitar, no matter how good that instrument may be, but the player.

At the concert Virginia had brought over from the States her beloved 1935 Hauser guitar, very similar to the one that the great Segovia played. At the sound check she offered me the guitar for a quick strum. I felt very honoured that this genius of the classical guitar trusted me with this very rare and expensive instrument.

In all honesty I can’t really do justice to nylon strung guitars and just leave them to players of the stature of Ray Burley and Virginia. I strummed the guitar but thought it had a fairly average tone, but in Virginia’s hands it sounded unbelievable! The lesson learned here is that it really is down to the player. Virginia had truly bonded with that guitar and knew how to extract exactly what she wanted from it, and I think that’s true of most players. Having a great instrument certainly helps but at the end of the day it’s up to the individual player to make the magic happen!

Yet again I have had a pang on conscience about all the guitars I have here that aren’t being played, and to that end I am taking quite a few guitars down to my friend David Crozier’s wonderful Old School Guitars shop in East Sussex. To be fair I decided to move on my lovely Martin M3M and of course good old UPS put a fork lift truck through it, Watch this space!

I hate instruments that aren’t being played. I’m not at all acquisitive in that way, and I surprise myself at times, but I think it’s a good thing. That doesn’t mean that it’s wrong just because a few of my famous guitar playing friends hang on to all their old and valued instruments. That is their prerogative, and at the end of the day some of these high end guitars have great financial value, and it’s probably better than money in the bank! For me it is time to move on and embrace even more wonderful instruments!

I performed a lovely private concert for Phil Werninck on the 25th of August to celebrate his 50th birthday. It was held at a lovely hotel in Lyndhurst in Hampshire. The small but appreciative gathering of family and friends made for a unique evening. Phil is a semi pro photographer, and during the course of the evening some of his interesting images were projected on to a screen whilst I played. It was just like the Shining Morn tour all over again! Surprise guests of the evening... Sue and Mike Holton who had made this trip as part of their holiday, travelling from the Peak District across country to Hampshire. Great to see them, and what a surprise!

Our thanks go to Phil and his wife Karen for inviting us to be a part of his special day, and also for raising £100 for the Tracy Sollis Leukaemia Trust  charity of which I am Patron.


How do you celebrate your 50th birthday? The answer came when perusing Gordon’s website I realised that he was doing up close and personal performances. The arrangements through Sue, his booking agent, were easy and painless, and to be quite honest, fun.

Most of my friends are not familiar with Gordon’s work, and it was with great pleasure to watch jaws drop as he began playing a perfect set. It is not till you hear him play live, that you can appreciate the music at its best and sounding even richer than on cd.

Once most of my guests had left, for me the night was completed by a few of us chatting with Gordon into the small hours, about music, art, photography.

This of course will have come and gone by the time you read this. If you attended I hope you enjoyed it. Because I have to write my news page in advance there will be a few events that haven’t happened yet, and this being one of those.

I was originally booked to play the main stage on the Sunday, but have been re-located to a smaller room for a master class session. I’m sure it will all go well, and I’m looking forward to seeing the other great players that are booked like Andy McKee and Sandy Thom.

As promised on the discussion forum here is a copy of the interview that appeared in R2 Rock’n’Reel July/August 2012 edition.

A shortened version appeared first in the Irish News but thanks to R2 you can read the full 2 page interview below. Please visit either their website R2 / Rock'n'Reel or Facebook page

Scroll to the bottom of the page and click the icon to read the article.

You may remember a few months back I made mention of a lovely new shop in Garstang called Crystal Clear Music. It was a great shop run by Steve and his lovely wife Jill. I received an e-mail recently from Steve telling me that the business had to close due to lack of support and not enough folk coming through the door. I could have wept for him. So much hard work and hope for this cracking new shop to just close its doors after just a few months trading.

Steve, the memory of your lovely shop will remain forever and that wonderful greeting when I walked through the door for the first time was magic, let alone that lovely guitar gift for my grandson.

Hilary and I wish you well in all you do, you deserve it!


See ya all next month and enjoy this glorious summer we are having!