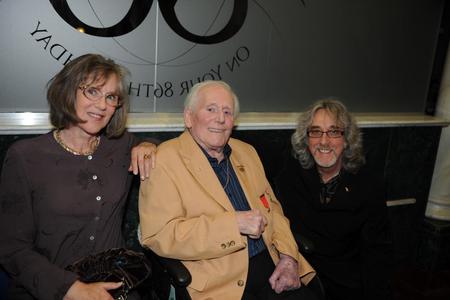 Like many people in the music business who play guitar, I met Jim at a trade show. When or where has been lost to time but rest assured it was a few years back. Jim was always a very approachable man and could be seen at virtually every major trade show here and abroad meeting fans and signing posters. There must be literally thousands of signed Jim Marshall posters around, and a standing joke in the biz was being the proud owner of an “unsigned” poster; a little like a GG CD!

In 2000 I became a member of the Grand Order of Water Rats, and Jim had been a member for quite a while. From that point on I would see him on a fairly regular basis at the meetings. I remember after one lodge meeting he came up to Hilary and I and asked if we were doing anything special? We replied that we were driving home as soon as we had a bite to eat. He then said he would like to invite us to supper at The Savoy! We of course accepted his generous offer and were driven in his chauffeur driven limo to the venue.

This was the first of quite a few generous gestures from the great man. When I played at The Stables Theatre in Wavendon a few years back, Jim purchased tickets for the front row. When I came out on stage I saw Jim, his lady, Bert Weedon and wife Maggie, Jess Conrad and his wife, Chas McDevitt and his lady, and quite a few more besides whom Jim had invited. Afterwards he treated everyone to a wonderful Chinese meal at a local restaurant. Believe me there was no end to his kindness.

A few years back Jim arranged for Hilary and I to go on the Marshall Factory tour to see how the product was made. Afterwards we went back to Jim’s home where he had arranged for us to stop over after the meal he had arranged at his favourite restaurant. To top it all we were given a bottle of his special label JM Whisky and a signed biography!

A very little known fact about Jim was that one of his hobbies was making wooden bird tables in his garage. When we arrived at his home, there he was in the garage giving a final coat of paint to the last of three tables he had created. He asked if we had a garden, and if so would we like a bird table. I replied “on one condition”....he had to sign it! Many people have signed JM posters, but not many a signed JM bird table! It stands in our garage as a constant reminder of that special day.

Every year we were one of many invited guests to his birthday party. These were always great fun. I met many musicians at these parties including Joe Brown, Andrew Sachs, Bernie Marsden, Bert and Maggie Weedon, Dec and Con Cluskey of the Bachelors and many more.

I really could go on for pages about Jim Marshall. All I can say is that he was a kind man, and quite a shy man in many ways who always made the effort to attend many of my shows and always made Hilary and I most welcome in his company.

He was a legend, he was loved by many, including my old friend Nico McBrain the drummer from Iron Maiden who almost looked on him as an adopted father.

Ironically I never did use his amps, but never lost sight of their virtues within the rock world, and the name of Jim Marshall has become an industry standard. He led a long and very full life and his likes will never be seen again. Sadly over the last few years his health had deteriorated to such a degree that he was pretty much tied to a wheelchair, but it never stopped him from doing what he felt was important.

Our thoughts and condolences go out to his family at this sad time. Rest in peace Jim, you were indeed a one off.