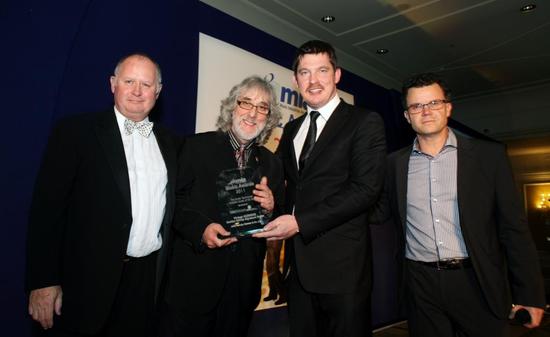 You will have by now heard to good news about JHS winning the Acoustic Guitar of the Year award by the MIA. This I have been told is a pretty big deal, and is the equivalent of getting a BAFTA!


Because the awards coincided with our annual winter break with Cath and Geoff Olner at Center Parks, JHS bless ‘em arranged for a limo to take us down to London for the event and drop us back to the door afterwards.

Don’t we look smart! It’s not often you see me in a suit. I met some interesting people there.

My old friend Keith Dudley whose company Black Star won the award for best amp, and another old friend Garry Chapman from PMT Music in Brum.

It was also a great pleasure to meet one of the organisations charity’s patrons Bill Bruford ( pictured with me on the right ) The charity is called Music  for All and I have been asked to be a patron along with Bill Bruford, Dame Evelyn Glennie, Aled Jones and Al Murray.
I felt very honoured to have been asked!

A good time was had by all BUT at £32 for three gin and tonics I doubt I shall be drinking at the Grovesnor Square Marriot hotel again!

My thanks and congratulations go to Dennis Drumm and all at JHS and of course Robbie Armstrong, without whom....

You can read the full story HERE

My old friend Midge Ure has just forked out hard cash and purchased my Vintage GG signature guitar! Midge borrowed one for his Princes Trust Gala concert and fell in love with it. Midge is also a huge fan of the Vintage JHS range of guitars and currently uses two models in his live set. I spoke with Midge recently and his enthusiasm was truly overwhelming. There are plans afoot for a Midge Ure signature electric for next year so watch this space. On the 12th of December I spent the day at JHS having a photo session and a DVD session for their website. I was extolling the virtues of the new GG Mahogany guitar and my new Black Label Fret King electric. The electric is a stunning guitar and is aimed at those acoustic players among us who want to make that transition from acoustic to electric and wish to mix the two sounds. This wonderful guitar can do all of these things.

The electric is being launched along with my acoustic range at next year’s NAMM show in January in California. When the guitar is officially launched in the UK you will be the first to know. I am SO excited by this instrument and the irony of it all with me being recognised as mainly an acoustic player.

Wouldn’t it be amazing if this guitar wins an award next year...You never know!

You will have read in a previous news page that I have been working with friends Martin Green and Carol Sampson on a new vocal project ‘Echoes of Heaven’. Well, I’m delighted to report that it is now finished and out there on ITUNES. The album will be officially launched in the New Year with an extensive PR campaign, but in the meantime treat yourself to something different by downloading this album.

This album is somewhat of a departure for me featuring the wonderful voice of Carol on existing tracks, one of them being a ‘classic’. More than that I shan’t say and leave it up to you to explore this new avenue in the career of GG. Full details are in the Discography section.

This is an album brim full of spiritual and I believe sincere and heartfelt sentiments from two very special and gifted people. The low’s of 2011 have been low beyond belief with the passing of my dear friend Bert Jansch followed swiftly by his beloved wife Loren. They say time heals, but I believe it will take some while for the music world to come to terms with Bert’s passing, and Loren’s family with the burden of their loss of Loren.  Life can be so cruel at times!  Please take some time to read my tribute to Bert and Loren here.

Thanks to Geraldine Auerbach for sharing this lovely family photo of them both from last Christmas.

You will have all read by now my memories of dear Bert in these pages. I’m touched to know that quite a few people have quoted from parts of that in one or two magazines. In last month’s Acoustic they featured it, and an Italian online magazine have asked to use it in their forthcoming mag devoted entirely to Bert. It was John Renbourn who put them on to me saying that he has been asking various friends of Bert’s to contribute something, especially those “that know” and loved Bert and were there for best part of 40 years. Needless to say, I was very touched by that. Tristan Seume also lifted a quote for his style file on Bert in this month’s Guitar Techniques magazine. My private concerts are still bringing joy to folk celebrating a special day/ event, this one being Claire’s special birthday. Being the gentleman that I am I shan’t mention that age, it wouldn’t be polite.

The Moore family are a delight to be with, and the following day it transpired that I had known Tim’s brother many years ago. What a small world eh?

I was also delighted to see that Tim had been bought a JHS signature GG guitar for his birthday this year. It looked and sounded great and had been well set up to play most comfortably.

This picture is the evidence of the fun filled “morning after”.

Thanks Tim and Claire for having us in your home and for sharing a special day. Our good friend Andy Smy bought us tickets for Tommy’s Brum date and what a night it was.

Tommy continues to be the greatest guitar entertainer on the planet, and the sell out crowd at the Hall loved every moment. The young Welsh Tornado Gareth Pearson was the support and he did a mind boggling first half and then joined TE at the end for two finger busting pieces. When I see Tommy he always refers to me as THE GUVNOR. I of course am flattered by this but he said he has several players in his GUVNOR category which includes Martin Taylor and Albert Lee. That’ll do for me!

I can’t begin to tell you what an outstanding human being Tommy is. I am indeed proud to call him my friend, to quote Brian May.

Some nice pics of the night, my thanks to Andy. Although I’m not known for playing Yamaha guitars these days there was a time when I was a major endorsee of some of their finer high end instruments.

This beautiful Yamaha LA 8 guitar dates from the early 90’s and has a lovely sound. This guitar was part of their handmade range. Whether this was true or not I really don’t know. All I can tell you is that it looks and plays beautifully. I recorded Forever Gold on this instrument for my Shining Morn album, and anyone owning that album will testify to the fact that it records really well and has a lovely singing clear quality to the sound.

They stopped making this model a while back. You can occasionally see them for sale, and I recommend you snap one up if you see one going for a good price. I have owned a couple of them over the years and both sounded equally good. This picture doesn’t really do it justice!