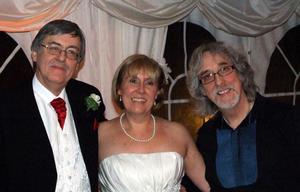 It gave me such pleasure to be the surprise entertainment for the evening for this delightful couple on their wedding day. Mr and Mrs Ward have been great fans of mine for some time, although if truth be told Paula is a fairly recent convert to my music. If I told you that Down the River was their chosen piece of music with which to sign the register, and then have my music in the background for the after ceremony event it will give you some idea methinks.

I had the bright idea of sneaking in around the back and then just casually strolling up to Paula (Noel Edmonds style) and saying ‘hi Paula I’m your entertainment for the evening’. This I did but as I was making my long approach toward her it occurred to me that maybe she didn’t recognise me OR didn’t even know who I was! Fortunately she did and all went exceedingly and wonderfully well.

I know I have said this before BUT...To be such a special part of such a special day in these peoples lives was indeed a thrill and a privilege. The memory will certainly live on with Hilary and I as I’m sure it will with Paula and Malcolm. You can read all about the event from Malcolm's perspective in the Fan Reviews section.

It just leaves me to say that Hilary and I along with Sue and Mike Holton wish you both a long, happy and healthy married life together. You are two VERY special people and you deserve it.

This month’s guitar is a bit special. I know that it was mentioned in December and a photo taken for the news page but I thought it worthy to speak at length about it and this guitar's important GG history.

Roger Bucknall made this as a gift for me way back in 1975. I had been waving the flag for Fylde Guitars big time. I had turned a lot of famous players on to the man's skill and sold quite a few to my pupils.

Sir Cliff has kindly loaned it to me for a short while for a possible project, and I have to say it is lovely to have it back in the house again.

While on the subject of Sir Cliff, I came across a video on YouTube the other day which reminded me of the following.....

The year was 1997. So there I was, I had just returned home from a gig and the phone rang. It was David Bryce, Sir Cliff’s manager asking if I was free to drive down to a studio in Wimbledon to add some guitar to a beautiful song written by Paul Field, that Sir Cliff had recorded as his contribution to the Princess Diana Memorial album.

The answer of course was yes!

I loaded the car with every available acoustic guitar I had. Six strings, twelve strings, Baby guitars you name it and arrived at R G Jones studio. The producer was the legendary Alan Tarney a man responsible for many of Cliff’s hits. He played me the track and explained where he would like a solo. I of course hadn’t prepared anything and was just willing to improvise over whatever was presented. After trying several guitars we eventually hit on the sound of my Armstrong Baby guitar. The end result is what can be seen on this YouTube clip of Sir and I on the National Lottery Live. I had a great time just sitting on a stool miming to the track and knowing that there would be no pressure when it came to my solo. I’m very proud to have been a small part of that special album for a very special human being.
Enjoy.

P.S. I had recorded an album in 1973 at R G Jones studio, and had also played on a Paul Field song 'Thief in the Night' when he was part of a band called Nutshell.

I was looking at Ritchie Blackmore’s superb website the other day, and the man (bless him) is still giving me amazing name checks. I think it is a great thing that someone of Ritchie’s stature looks toward me as an influence. I‘m very flattered and honoured that he does. When you get a chance just find his website via Google and look under a heading that says something like...find out more things about Ritchie.( or just click here !! )

Acoustic Magazine has expressed an interest in continuing my column this year. This is a great little mag and one I’m delighted to be involved in. Long may it continue. What a tremendous new start to the year for Rob Armstrong:

His new workshop is now up and running and Rob has produced a stunning new guitar to celebrate the fact. This is the first instrument to be made since that dreadful fire! I have had the pleasure of playing it, and can report that it sounds wonderful.


Rob continues to produce outstanding instruments, possibly better than ever. Long may he continue. I congratulate Rob and his partner Sheila for their courage and hard work throughout the whole episode. A lesser couple would have given up: We are all SO proud of them.

The fund raising auction organised by Acoustic Magazine for Rob Armstrong started on the 20th of January. Hopefully by the time you read this a few coins will have been raised for our Rob. Thanks go to JHS for donating the Vintage GG 2000 guitar and for Sheila Hodson for agreeing to us including one of the late Dave Hodson’s Tenor guitars.

Heartsong has been voted number 4 in the top 50 greatest instrumental pieces of all time in Acoustic Magazine’s Readers Poll. The number one spot went to Rodrigo's Adagio from Concierto de Aranjuez, and list includes some major names. Number 4 is an honour though methinks. Glad I wrote it!

Heartsong started life ironically as a song which I wrote in about 1969 called Starting All Over. It was written in open G tuning...DGDGBD. I was experimenting with some double strummed chords one day and 'hey presto' that basic chordal riff arrived at the fingertips. The piece just grew organically from there. Placing the capo at the 2nd made all the difference to the over all feel and vibe of the piece.

Heartsong has in its own way become a classic, and it single handedly brought me to the attention of a much wider audience,especially when it was used by the BBC for many years as its theme for the Holiday Programme. It was subsequently nominated for the coveted Ivor Novello Award. I still get immense pleasure from playing it all these years on and it continues to be a challenge in terms of its inbuilt energy and technical challenges. Back in November I told you about a feature in Classic Rock Presents Prog Magazine with yours truly chatting about the new album, Shining Morn. It also featured a humorous look back at those heady days of the 70’s and THAT picture disc. The magazine is a pretty amazing package coming with its own posh envelope to protect it. Ironically the featured artists on the cover were none other than my old buddy Mr Rick Wakeman and Jon Anderson. Having finally gotten hold of a copy you can click the link at the bottom of the page to read the article for yourself.

The Jan 2011 edition includes lists of "Critics Choices Albums of 2010" and I was delighted to find that Shining Morn was included in the Top 20 lists of writers Malcolm Dome, Grant Moon and Philip Wilding Check out the itinerary on the Concert pages Hope to see some of you there.


It's a small world

Just before Christmas Hilary and I returned home after a week away, to frozen pipes, a common tale with the cold spell we had then. Unfortunately the damage had been done and we had in all FOUR burst pipes. Fortunately our daughter’s boyfriend Mylon who is brilliant at pretty much all things DIY leapt to our rescue and repaired the damage, but not before the hall carpet was completely ruined!

Mylon suggested getting some polystyrene beads to act as insulation around the offending area. I Googled a few places and found a company that sells the very beads just a few miles away in Erdington.

I rang the company and spoke to a very pleasant lady who took my order and asked for my name, this I gave. When doing so the phone at the other end went very quiet...She then asked “Are you Gordon Giltrap?” When I replied in the affirmative the phone went quiet again. The lady then told me that she worked for Decca records in the seventies and worked on the promotion of my Visionary album way back then!

Her name then was Beverley Cheadle, a name which sort of rang bells in this fading memory of mine.

Shortly afterwards I dropped in to collect my order and low and behold this lovely lady came out to reception and introduced herself as Bev. She then introduced me to her husband who co owns the company. A brief spell of reminiscing commenced!

Hilary and I have been invited to have a guided tour of the factory whenever we like, and if time allows we may well do that very thing!

How amazing though to not only find somewhere on our doorstep that sells this stuff but to meet up with someone who actively promoted Visionary all those years ago. We hope to see Bev and family at a gig sometime. A few weeks back a Rob Armstrong guitar came up for auction on E-Bay. This guitar was a huge part of my history. It had been used by me on stage and in the studio for the best part of seventeen years!

A few years back a friend of mine had always admired it and wanted to have it as part of his collection, so I decided to let it go to him knowing that it would go to a good home. I received a very generous offer from him and the deal was done.

Sadly this friend had gone through a number of life changing experiences of late, to such a degree that he had to part with all his guitars, hence this instrument being up for sale.

The good news is that I believe it fetched around £1,400. I felt good about this on a number of levels. This guitar was worth that figure and more (If you commissioned Rob to make something similar today the cost would be about two and a half thousand pounds) and of course my connection with it may have factored strongly in its sale. This is a very rare guitar indeed!

I hope the person who has it now enjoys playing it as much as I did all the years it was with me.

Be well all,
G