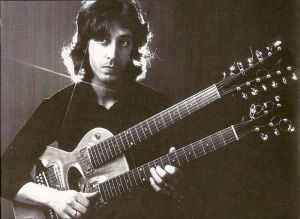 Here’s a sentence you have read before...By the time you read this! Well it’s true.

By the time you read this, Never Mind the Buzzcocks and my nanoseconds worth of appearance will have been recorded and is due to be transmitted on the 2nd of December.

Well, it was FUN and it was good to meet Phil Jupitus and to find out that he was a very keen guitarist with a serious guitar collection. I offered to give him a helping hand with a lesson some time and he nearly bit my hand off! He then said to give Mr Wakeman his love, saying that they were good friends but hadn’t seen each other for a while.

The line up was interesting. I thought they were there for a ZZ Top look alike contest, but I guess the whole point of the Identity Parade was to see what GG may look like all these years on. It was only afterwards that Phil said that he knew who I was but had to keep quiet about it... that was good to know.

Not really being that much of a TV viewer or indeed a follower of the show I learnt a very important fact. The panel DOES NOT see the archive clip that they show, only the audience and the viewers at home, and have to go on pure guesswork as to the identity of the guest.

I was particularly pleased with the clip they showed of my 1979 Top of the Pops appearance playing Fear of the Dark on my twin necked John Bailey guitar. This was only the second time I had seen it!

They couldn’t find a proper top like the one I wore way back then, but did find something similar in the form of a woman’s Next blouse. So I now am officially a big girls blouse... bless em!

I have to say that the BBC looked after us extremely well with their hospitality. Nice hotel and a taxi from Euston to the Television Centre (the last time I had been in that building was in the late seventies for TOTP) and a taxi the following day to take us wherever we requested. We requested the V&A!

Here’s a funny thing.... We were sitting in the dressing room waiting for wardrobe to turn up, when across the corridor we heard some rather good piano playing going on. I stepped outside to have a listen and to see the name on the dressing room door... It was Jools Holland, warming up for his Live Later with Jools show. I’m STILL waiting to be invited...grin!

In spite of the tube strike Hilary and I had a lovely day wandering around the beautiful V&A. The weather was stunning. My brief appearance as part of Guitar Nation held at Olympia was indeed a pleasurable one.

My presence there was under the banner of J.H.S to showcase the new GG guitar.

I did a short 15 minute spot on the afternoon of the 13th and again the following morning at 10-30 (not very rock and roll) this time for about 25 minutes just short of the 2 minutes silence for Remembrance Sunday.

It was a great show and felt quite intimate with loads going on; it also gave me a chance to meet up with my old friends Albert Lee and Martin Taylor.

Other names on that weekend were Dominic Miller, Sting’s guitarist who played a very pleasant set just before me on the Saturday, and Steve Vai on Sunday afternoon. We had gone by then, but I was told that the queue for his master class at £150 a shot was huge!

I spent a couple of hours on the JHS stand chatting to folk about my GG signature guitar, and most enjoyable it was. I’m delighted to report that the reaction right across the board has been fantastic, culminating in a full FIVE star rating from ACOUSTIC magazine, and another magazine PLAYMUSIC chose it as their acoustic guitar of 2010! Details below.....

Once again, some stunning reviews of the new guitar in this months music press and online.

Playmusic pickup Magazine gives the new guitar the thumbs up.

If you are in the market for a good electro acoustic but counting the pennies is never far from your thoughts - and let's face it, we all need to be mindful of spending in these thrifty times - then we couldn't recommend the Vintage VE2000GG highly enough. This guitar reflects the input - and by that we mean genuine hands-on input -invested by a top class luthier, a world renowned guitarist and a manufacturer / distributor that knows their market. It even comes with a quality fitted case. Looking at what it offers in terms of pure bang-for-buck the Vintage VE2000GG stands out as the best value for money that we've seen in any product in any category in 2010.

Read their full review online here (pages 26/27), watch the video below from Youtube or click the icon at the bottom of the page for a PDF version.

There is also a two page review in the Dec edition of Acoustic magazine which gives the guitar their maximum score of 5/5 in all categories - build quality, sound quality and value for money, rating it "superb, almost faultless". Again, there is a PDF file available at the bottom of the page.

For the complete rundown on the guitar so far, all in one handy place, see the new page in the Guitar Anoraks section

A new guitar in the collection

Each month, time allowing I shall feature a guitar from my collection, which isn’t as vast as people think, and quite honestly I can’t stand it when you see interviews in the magazines with these rich rock stars posing with their 59 Les Paul’s and priceless Strats that only the rich and famous can afford. Don’t get me wrong, I do have some lovely and quite expensive guitars in my collection, but I like to think that they are all used in some way shape or form. Failing that, I get a twinge of conscience and sell them to folk that hopefully will play them...... Lecture over.

I mentioned in last month’s news that whilst in Ullapool I purchased a new Fylde guitar. Well, here it is, my new Fylde Orsino. Roger Bucknall made this for last year’s Ullapool festival, but it suffered a very small degree of wear to the front whilst being played by an enthusiastic strummer. Roger then decided to just keep it as a demonstration model for future events. That was until I came along, picked it up for a quick strum and instantly fell in love with its light weight and instant response to a light touch.

I have already made it a part of my history by recording a brand new version of Ladies of Lichfield on it in readiness for the 4 Parts Guitar CD planned for release in 2011.

The Orsino has been in Fylde range for a number of years now and has identical dimensions to the mighty Falstaff, one of my favourite guitars from the Fylde range. My current pride and joy of the collection is a cedar top Falstaff based on a guitar that Roger made me in the late seventies.

The Orsino has a back and sides of Honduras Mahogany, an Indian rosewood bridge and fingerboard and the top timber is select Western Red Cedar.(I love cedar) The binding on this guitar differs from the standard model and is of walnut.

For me what makes this guitar SO special is that it was made whilst Roger was suffering with pretty serious health problems, so you can imagine how much extra effort was put in to create this lovely guitar in time for last years festival.

Roger being the dear friend that he is sold it to me at a VERY special price and for that I thank him most sincerely.

Anyone who has had any close association with Roger will know what a generous and caring man he is; whenever and wherever possible he goes out of his way to make these outstanding guitars as accessible as possible to players near and far who appreciate a great instrument.

I’m proud to call him my friend and cannot recommend highly enough the outstanding virtues of a beautifully crafted Fylde guitar.