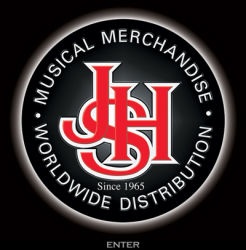 
Every year JHS set aside four days in their calendar for their JHS EVENT. This year it was from the 13th through to the 16th of June. The event is always held at their headquarters in Garforth just outside Leeds.

The event is a VERY impressive affair. The company erect a huge marquee for visitors to have lunch and refreshments. This is also the location for some of the live music. Elsewhere another marquee had been erected as a small exhibition hall for their various and MANY product range.


Hilary and I had set aside the 15th and 16th to attend along with Rob Armstrong who of course designed the new Vintage JHS GG guitar. This was the perfect showcase for this outstanding instrument, and I'm delighted to report that the general consensus of opinion was that it was THE hit of the show. Retailers from as far north as Scotland attended and many of the dealers were ordering six at a time!

I performed for about half an hour on both days and bearing in mind these people are pretty much ‘hard nosed’ retailers, I was received extremely well. See video below ( with apologies for shaky camera work and moving chairs ! )

The guitar which will be available in both six string and twelve string versions should be hitting the shops around about August. There has been a tremendous vibe about this guitar and we are hoping for some great reviews from the various guitar magazines and trade papers. Whilst we were there Rob and I did interviews with Guitarist magazine and Guitar and Bass mag. It is of course featured in the current issue of GEAR magazine. I also dropped off my AV3 Vintage electric at their workshop for a Fishman power bridge to be fitted. This has been done and sounds wonderful!

Rob and I put on our best smiles for a further photo shoot for JHS to be used in future publicity.

All in all a VERY enjoyable visit, and I thank all the staff at JHS for making Hilary and I so welcome along with of course Robbie Armstrong and his partner Sheila Rigg.

For those who have seen me playing recently, you will know that I am currently using one of the first production models on stage, and although I'm still getting used to the onboard electronics, it is sounding excellent. In fact I was playing at The George Hotel in South Molton on the19th of June and a gentleman called Andy, who asked me to sign his Taylor guitar that afternoon in the car park (Tommy Emmanuel had also signed it along with Woody Mann) came up to me at the end of the gig and offered to buy that GG guitar there and then plus a donation of £500 toward a charity of our choice! I of course had to decline explaining that this was the only production model available to me at this time so therefore I couldn't part with it...Bless him...a nice man he was too. The gig was a cracker  and I always enjoy playing there.

It was a joy to see all our pals at the Salisbury concert. Eddie and Serena, Bob and Jane, Russ Carol and Ashley, Trev and Thea (great photos Trev) Mike Stranks, Roger and Em. Thank you all for your ongoing support for all I do.

Well, like all things it came and it went!

The Shining Morn tour in the main has been a very enjoyable and satisfying experience on many levels. The chance to play bigger venues was good and of course the back projection and whole presentation was a new thing for me. What it did do was to make me play the same pieces each night and really focus on tunes old and new. It was nice to re-visit old chestnuts like Ecchoing Green andLondon and inject a 62 year old perspective into these old tunes of mine. I think to a degree that if something is created from the heart it stands a good chance of surviving the passage of time, and Ecchoing Green and London I guess must prove that.

I have often said that with these creations of mine they leave me, and like children have a life of their own. As Dylan was once said” I am forever a servant to the songs”. I feel exactly the same way and am forever a "servant" to these tunes, trying to keep them fresh and alive and trying to inject as much emotion as I can into them. I hope I succeeded....I think I have! I remember one of the concerts where I was playing Ecchoing Green and   London, and as I was playing them I was remembering my children at the age they were when I wrote these pieces along with other material that made up the Visionary album, and whilst doing so felt a lump come to my throat... I became quite emotional...must be me age methinks...grin.

My thanks go to Andy Reiss and David Fawcett from Smart Move Productions for promoting the tour and for looking after me so well at each concert, acting as roadies and bringing various guitars on and off the stage for re-tuning. Remember that these gentleman are both very successful singers in their own right having been stars of the West End stage, and are currently on tour with their own production of Beyond the Barricade. I thank them most sincerely along with Matt and Ed for the lights and projection.

I sincerely hope this isn't the last time that this show will be staged as it obviously worked artistically, but unfortunately as has been mentioned before in news letters the attendance at many of the shows was disappointing. This could be for a number of reasons: The Recession, the World Cup, the General election (we had to cancel the Cannock  show because of that) and a few more reasons beside. One doesn't want to go down the road of thinking that as an artist I don't have that broad an appeal to put bottoms on seats. That would be negative in the extreme. I KNOW that my music brings a lot of pleasure to folk and for that I am daily grateful and humbled. I think the problem has always been the media. TV has eluded me for years, and if I could just get my face on the box occasionally it would make a difference.

I think a lot of artists in my area of music are suffering. I did a concert in South Molton in June and packed the place out, but a good friend of mine with a host of BBC Radio 2 Folk awards to his name played there a month prior and attracted less of audience than I . This may have been due to a slightly higher ticket price... who knows.

Folk are generally having to tighten their belts and they say it is going to get worse! No one is having a particularly good time of it right now, and I consider myself to be one of the lucky ones. As they say in the Grand Order of Water Rats. "If you can't make the meetings because of work we are pleased for you, to be working is everything".

My dream is to plan a concert for maybe eight months hence at a Birmingham venue like The Symphony Hall or the Town Hall, and repeat the Shining Morn show. It would be a shame to let it wither on the vine.

My thanks to all of you who attended. Judging by the many positive postings on the FORUM, I done good!

Many of you will know that for some time now I have been offering my used guitar strings to folk after concerts in exchange for a small donation to a schools charity we are involved with. The money raised went towards musical instruments and equipment for a primary school. 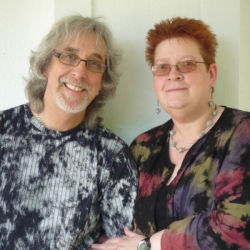 The following explains a new and unique way of recycling my old strings!

For many years now Karen (Kaz) Boulton has been attending my concerts with her other half Malc Welch, he of Rick Wakeman's Roadie and Merch person fame. It was Malc that From Brush and Stone was dedicated to!

During the course of these concerts Kaz could be seen fashioning wire and silver into jewellery, mainly earrings and necklaces.

Hilary has purchased some of her matching sets for friends and family. They are a delight to behold and also still raising money for charity - £5 from every sale goes to the North Staffordshire Branch of the MS Society.

It was at one of my village hall concerts that we suggested she display some sets on our merch table. The response was good with quite a few sets of necklaces and earrings being sold. Shortly after this Kaz came up with the idea of trying to make similar items out of my old guitars strings. Not an easy task and very tough on the fingers. The end result can be seen in these photographs. 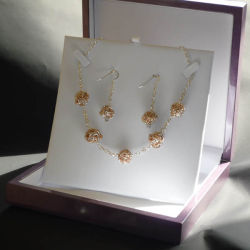 Each set comes in a beautiful presentation box with a signed certificate from Kaz and I. The certificate explains how it all came about and our connection and friendship.

I think this is a fantastic bit of recycling, taking something that a player usually throws away, but has now been transformed into these items of beautiful jewellery.

I'm very proud to be associated with Kaz and hope and trust that she will continue making these unique items. They make the perfect gift! 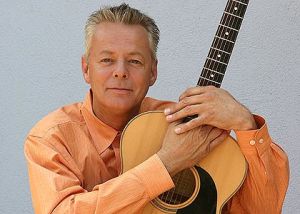 I'm sure you will share my congratulations for my good friend Tommy Emmanuel on receiving the highest award that Australia can bestow on one of its citizens. The award was for services to music and his outstanding charity work. I have of course sent my congratulations personally but wanted to share this tremendous news with you all. Well deserved I say!

My good friend Martin Hudson visited our home early in June and brought his son in law Paul along for a little one to one tuition. Whilst here he conducted a very enjoyable interview with yours truly. Look out for that in future issues of the mag.

I was delighted to find out that my music was played on Portuguese Radio on June 26th. Lakeland Memories and Ravensbourn were played on Radio Terra Nova - in their O SONHO DO ROCK 'N' ROLL program. This program is described as “21 Years with the Best Progressive Music on the Portuguese Radio” 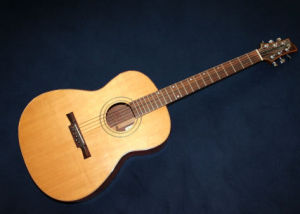 I still have for sale my Rob Button guitar that was used for By Angle Tarn. You can get info on this guitar by going to the Guitar Junction website.

That's it for this month folks.

See you all later.