Just in case you have somehow missed the rapid growth and popularity of YouTube, here is a brief description courtesy of Wikipedia:

"YouTube, which launched in 2005, is a popular free video sharing website which lets users upload, view, and share video clips. Videos can be rated; the average rating and the number of times a video has been watched are both published.

During the summer of 2006, YouTube was one of the fastest-growing websites on the World Wide Web, and was ranked as the 5th most popular website on Alexa, far outpacing even MySpace's growth.

According to a July 16, 2006 survey, 100 million clips are viewed daily on YouTube, with an additional 65,000 new videos uploaded per 24 hours.
The site has almost 20 million visitors each month, according to Nielsen/NetRatings. In November 2006, the company was purchased by Google."

In the last fews months a growing number of video clips of Gordon have been added to the ever increasing database.

Some have been added by the record company to promote DVD sales, this example of Gordon Giltrap and Rick Wakeman - playing Fast Approaching during the Symphony Hall Concert has been watched over 14,470 times so far.

Some have been added by friends such as Geoff Olner, with complete backing from Gordon.
Yet others are recordings filmed and added by fans featuring either Gordon in concert, or peoples own playing and interpretations of Gordon's compositions.

A set of postings to the previous website asked the question " YouTube - Piracy or promotion " The topic was started by John Kelly and generated a fair amount of interest. Because of this the thread has been reposted in the News section for you to read again. 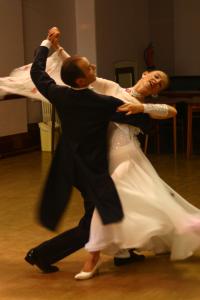 Exclusive footage of Gordon playing Mrs Singer's Waltz, combined with footage of UK Champion ballroom dancers Ian Sharpe and Victoria Lawrence has been made available to the public via Youtube.

To read the story behind this video, Click here

This is intended to be the first of many such releases of official footage that otherwise would not be seen.

More videos added
As of 6th Dec 2007 there are currently 5 official videos on the Gordon Giltrap Youtube Channel.

Make sure you subscribe to the Gordon Giltrap Channel so that you get to find out about more videos as they are added.