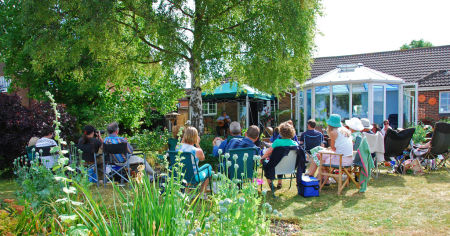 Every month that rolls by brings forth special gigs, and I think this months bunch are all outstanding in their own way. The 4th and 5th of July was my beloved Hilary's birthday weekend and it was spent at the Watlington gig followed by 'Gordon in the Garden' a low key concert at Kaz (she of 'Kaz' fame) and Leigh Greenham's lovely home in Oxfordshire. Both events were fund raising ones, the first being for Watlington Library and the second for Katherine Kent's charity Future Talent. For once the sun shone on both days making it quite a rare thing at the moment. A grand time was had by all. Special thanks to the Greenham's for organising both events. 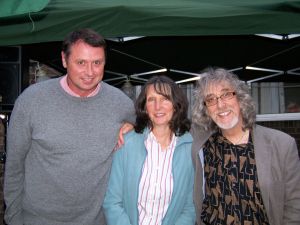 My private concert organised by Ian and Jenny down there near Bridgwater was such a lovely setting and just playing to a small gathering was such fun in spite of the rain that threatened for much of the evening, but we got there in spite of it, and my little PA sounded better than ever some reason. Bless you Ian and Jenny for making it happen and for looking after us so royally!

Radio interviews for Brush and Stone.

On the 13th and 15th of this month I spent a very pleasant two days doing back to back interviews at the Mailbox in Birmingham to tell the world about the Wakeman Giltrap album 'Brush and Stone'. I love doing interviews from their ISDN line, it is so easy. I jump on the train up the road where we live and sit in a cosy booth all day chatting about the thing I love most in life (APART FROM HILARY AND THE FAMILY OF COURSE) and that's music. I took an hour's break midway and popped out for a lunchtime meal at our favourite French restaurant. It's a great life when it's good believe me.

Click the icons at the bottom of this page to read a lovely 'Brush and Stone' review by Trevor Raggatt that appeared in R2 ( Rock and Reel) magazine recently and also his piece on Fear of the Dark which is published in this month's edition.

I'm delighted to say that in the main the album has been very well received and is being hailed as a mini masterpiece. Who am I to argue?

I spent the day in the studio last week with my friend and sound engineer supreme Paul White, making a start on sorting out the tracks for my new studio album due for release next year. It's sounding good... Watch this space folks.

I have decided not to mention any more recent acquisitions until such time as I decide on what I'm keeping and what is being sold. As everyone will know by now, I sell all my unwanted instrument via Guitar Junction down there in Worthing, West Sussex. The guys who own the place have fast become good friends and the shop has to be the best there is in the UK for such a broad cross section of great instruments ranging from the affordable to those high end dream guitars we all know and love, and in my lucky case... own. Someone came up with a nice suggestion of putting pics of my favourite guitars on the site. This we shall definitely do at some point. 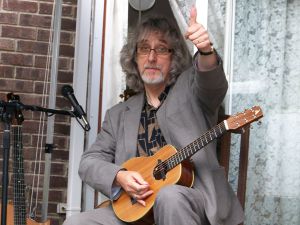 New label for back catalogue.

For the best part of ten years much of my past catalogue has been with Voiceprint (much of it still is). The licensing period for quite a few of these old chestnuts have expired so I am seeking to find a new home for these dear old tunes of mine. I will let you all know when things start to happen in that area. Nothing will happen until the new year so all the stuff is still available worry not!

Click the icon at the bottom of this page to read a great review from Stafford Guitar Centre's website of 'The Long Road Home' book.

The new GG book 'Vintage Giltrap' is being printed as we speak and will most certainly be on the site any day now. I shall also plan a couple of launch concerts in Brum and Chesterfield to coincide with the books release. Once again.. PLEASE watch this space folks.

I have been looking for a contrasting piece for the Loop Station. 'The Dodo's Dream' is getting on for three years old since its new incarnation via the Loop Station, and Leigh Greenham suggested that maybe 'Night' from the Visionary album would be perfect for it. 'Night' is a five part canon and a piece I have NEVER really performed live. It is also his Mum's favourite GG piece! So it was with great interest that I dug out the music and Tab and rediscovered this ancient piece written way back in 1975. I am delighted to report it is shaping up nicely. It needs a lot of work but I think it may be worth it. It's a strange feeling rediscovering something that one wrote all that time ago, it is almost as if someone else wrote it. This is something I constantly feel when performing my music. I wonder what I was going through at that time and what influenced the piece? As Bob Dylan said about his own work. 'I am just a servant to the songs'. That is exactly how I feel about my own work and this is becoming more so with the passing years. I may even re-record 'Night' for the new studio album. It will certainly have a new and fresh approach to it. 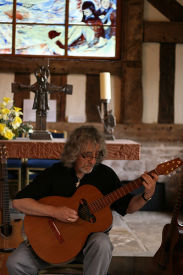 My last gig of this month was in Chadkirk Chapel. It was as ever a sell out, which is always nice, and whenever we are those parts we stay with our dear pals Brian and Julie Booth in Macclesfield. It was a lovely couple of days marred only by the fact that I seriously damaged my car trying to get of the field at the bottom of the venue. It hard enough getting IN through a ridiculously narrow gate, but getting out in the dark and rain was a nightmare...Hey ho, worse things happen at sea.

I'm hoping to take ownership of a new custom built pedal board next month. This will hopefully make life far easier for me and soundmen at future concerts and will hopefully do away with messy leads and stuff. Pics will be on the site when it's done and details of where you can get one made by my new friend Dale up there in the North will be there also. I have seen the work in progress pics and it is a mini masterpiece of design believe me.

Once again a big THANKYOU to all those who attended my concerts, and a disappointing note for our webmaster Sue and husband Mike Holton who spent a very soggy two weeks away in their new caravan.

I've just received a text from my daughter Sadie telling me that she is now the proud owner of a caravan too, bless her!

I wish you all a trouble free August and one that might, just might, bring forth a little sunshine. It took Hilary and I a good two hours to cut the lawn when we returned from Macclesfield !

Be well and stay dry.