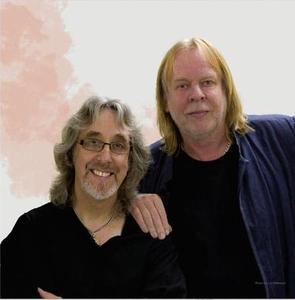 Hopefully over the next week/months we should see some reaction from the media to this album. Because of Rick's prior commitments it will be down to yours truly to spread the word about a piece of work I am personally VERY proud of and feel that it should be heard by everyone. What it needs is for Radio 2 or Classic FM to pick up on it. We continue to live in hope.

On the 15th of March Hilary and I took a trip to London to attend Victoria Ayling's 50th birthday party at the 606 in Chelsea. Victoria is the other half of Rob Ayling the man behind Voiceprint. It was a great party and our resident cameraman Harold Houldershaw (he of the Double Vision DVD and Symphony Hall DVD fame) was in attendance filming all the guests which included one of my favourite comic actors Mr Graham Fellows of John Shuttleworth fame. It turns out that Graham is a long standing GG fan. He has plans to convert an old church on Orkney into a recording studio, the project could take two years but when up and running I have been invited to record there, so that should be fun.

Whilst we were down in town Hilary and I visited my old home town of Greenwich. We visited my old house at 3 Crooms Hill opposite where the poet laureate Cecil Day Lewis lived and the childhood home of Daniel Day Lewis, who MUST have lived there at the same time as me. We may even have crossed paths. On returning to Westminster via the wonderful Thames Clipper we crossed over to the South Bank and our favourite book stall outside the Purcell Rooms. So there I was looking at the books when a gentlemen said..."It's Gordon Giltrap isn't it ?" I turned round to greet this person, a very nice gentleman who informed me that I had bought one of his old guitars on E-Bay. Small world eh folks!

I have been fairly busy recording some more tracks for a forthcoming studio album, the title of which I'm still working on. One of the recorded pieces featured my new Martin D 28 guitar. The piece has featured quite a bit in my shows of late and was a commissioned piece entitled 'Rachel's Reflections'. I'm ever so pleased with it and hope to get into Paul White's studio soon to do some more editing and tinkering. This new album has been gestating for some time now and I really want to finish and draw a line under it so that I can clear my mind for other things.

I also have recorded a brand new version of 'Ive's Horizon' for this new project which was sparked off by my fab new Fylde Fan Fretted 12 string. It really is quite strange re visiting such an early GG piece. I'm also working on a mini guitar orchestra piece called 'Roseberry Topping' which lends itself to the Loop station treatment ala' Dodo's Dream'. 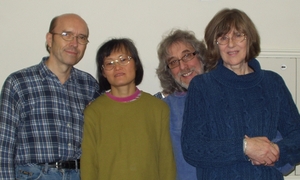 A brief word of thanks must go to Paul Lenz and his lovely lady Lin who attended my Steeple Aston concert on the 14th of March. Having travelled all the way from Finland to see me play was absolutely amazing. You can read more about this on the Forum page and see the cracking photo that Mike Stranks took of the meeting. Lovely stuff indeed. A big thankyou goes to Mike for being their driver for the evening. Haste ye back Paul and Lin...Bless you both.

I don't know whether it's my age or not but for the life of me I didn't remember visiting and spending quite a bit of time in the past in Barford St Michael, the site of yet another village hall concert on Saturday the 21st of March. It was only after I had arrived and chatted with Steve my host for the evening that I was informed that this village was the home of Fairport Convention's Woodworm Studios! Steve has been the current owner for five years now and after a splendid bite to eat cooked by his lovely wife, I was given a guided tour of the newly refurbished studio and one time home of Dave Pegg Fairport's bass player. Steve has done a great job and I have memories of recording a track for Rick Sanders first solo album, I also remember rehearsing'Heartsong' for my 1987 Cropredy appearance with their then drummer Dave Mattacks and their then guitarist Maartin Alcock with of course Rick on the fiddle. I wish I could look back on those days with fondness but sadly I can't. Nuff said methinks. Maybe that's why I had no real memory of Barford St Michael. Maybe it was my subconscious mind trying to block it out! That aside it was great night with a great crowd and a wonderful host. Maybe, just maybe I laid a few ghosts that night.

I have recently acquired two new guitars. The first one is a 90s Fenix Telecaster copy fitted with Bare Knuckle pickups which plays and sounds amazing, as good if not better than most USA models! The second guitar is a first issue Faith Saturn rosewood and spruce acoustic. I shall be getting this set up by my friend Trevor at  PMT Music in Brum. It will be amazing when it is set up and sounds great even now with old strings. It's not an expensive guitar but in my opinion Faith guitars are VERY underrated, and this guitar will be great for taking on holiday.

Both instruments were acquired from Mark's Music Shop in Melksham, do Google them and if you're in the area drop in, Mark's a nice guy and in these troubled financial times would I'm sure welcome your custom. Just say that Gordon sent you...grin.

Just having the lounge decorated by my good friend Eddie Giddings, another keen guitar player!

See you at the next gig in your area I hope.

Be Exceedingly well folks.
The Troubadour.