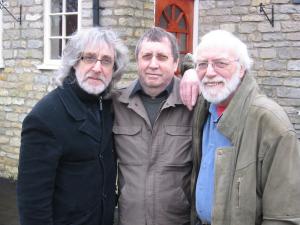 Well, it came and it went and I'm wondering where those three years have gone, three years of hard work and preparation for all concerned.

The last night at the Hub will stay long in my memory for not only the concert but the quality social time spent with Bert and Loren Jansch, Rob Armstrong and his lady Sheila and our pals Cath and Geoff Olner.

I played the first set and our Bert finished off the evening to a large and VERY appreciative crowd. All BJ classics were there from Blackwater side to Fresh as a Sweet Sunday Morning but NO Anjie, which is fair enough as the dear man has only just passed away. We hope to post some pics on the site in due course, but in the meantime this month's issue of GUITARIST has done us proud with a nice feature on the event.

Thanks to Phil Cosker for the photo below. 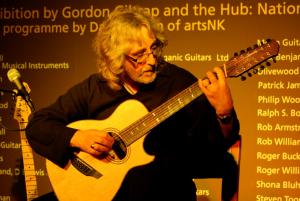 My thanks go to all at the HUB along with Bert Jansch, Newton Falconer, Martin Taylor, Martin Simpson, Tristan Sueme, Gareth Pearson and Ray Burley for some FANTASTIC concerts. This event has truly put The Hub on the map.

You can read a new interview with Gordon for www.italkguitar.com online now. The site also features Bert Jansch and many other items of interest to guitarists.


"From Brush and Stone"

Watch Gordon and Rick Wakeman chatting about their forthcoming cd release "From Brush and Stone" on YouTube.

I think it would be appropriate to give some background info on why I decided to appear in Panto at Port Isaac this year.

Let me take you back about three years to a family holiday at Providence cottage in Port Isaac. Hilary and I had never visited this beautiful village before and on arrival instantly fell in love with its old world charm and timeless atmosphere.

During our time there filming had started on the now incredibly popular Doc Martin series, and indeed some of the filming took place outside our very cottage and its star Martin Clunes could be seen on a regular basis in the village.

Anyway that aside I think we have established what a beautiful fishing village this place is. We now move on about six months to find out that I had been booked to play at the village Hall......amazing I hear you cry!

Hilary and I couldn't believe our luck at having the opportunity to be a part of the village music festival. As soon as we arrived we were met by Sam Littlechild (great name eh) the owner of Secrets the local art cum gift shop in the village. From the word go we bonded with the village folk including Sam and his lovely wife Dee. The concert was a great success, and I volunteered my services to raise funds at a future concert. Since then I have performed in the village hall twice to help raise funds for the village Hall in return for free accommodation, giving Hilary and I a nice cheap holiday in our favourite village.

Moving on to December 2008 and the villages biannual Panto where Hilary (bless her) volunteered my services as a wandering minstrel in this years production. We borrowed an appropriate costume from some friends who over the years have put on many am-dram productions in the Stonall area close to where we live.

I was cast in the roll of Alan of Lidle in this years production of Robin Hood and Babes in the Wood. The performance dates were December 28/29/30/January 2nd. Mine was a non speaking part but as things progressed I managed to slip in the odd witty remark. I appeared five times in all, the first time at the top of scene 2 where I appeared in front of the curtains to play Here Comes the Sun on my trusty Baby Guitar. Then I came on to play Maddie Goes West and this lead on to me backing Evil Eric on Sweet About Me...great fun. Two more appearances followed and I played The Picnic and Mrs Singers Waltz. 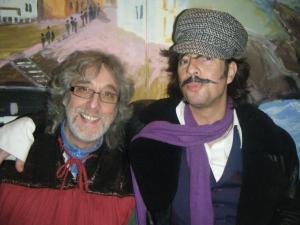 On the bill were two of the villages most famous residents, Laurence Llewelyn-Bowen who played Dick Dastardly and his lovely wife Jackie who played Penelope, their daughter played Muttley. I have to tell you that the man you see on TV is quite different to the real life one who is a great guy and VERY unpretentious. Laurence and I hit it off pretty well from the word go. The Bowen family have been a part of the village for many years, and well before Laurence became the celebrity he is today.


Sadly the production was plagued with coughs and sniffles and I'm sad to say that within a few days I also succumbed to the dreaded lurgy. A special word of thanks must go to EVERYONE who helped with the sound, the lights, the props, the bar, indeed everything. My thanks go to Barbara who invited me to appear, Sam and Dee Littlechild, Roy for supplying the back stage refreshments (whisky and coke) Jill and John at our favourite B & B. Bill and Ness, Alan and Edna - in fact everyone who struggled on through flu bugs and all to make this years Panto such a success. Thanks must also go to my friend Paul White for the loan of the guitar wireless system that allowed me to wander about the stage with having to plug into an amp. Bless you all.

All in all it was great fun, and maybe God willing in two years time I shall be treading the boards again in the Port Isaac Panto. The good news is that I'm playing at their festival this coming May...Can't wait.

There should be some photo's coming soon which will no doubt bring a smile, as will this one of your truly with Newton Faulkner, taken at the Hub recently. He has it all…great guitar playing, great songs, great voice and a very engaging stage presence. He will, I believe, go far. What I forgot to mention was that a few years ago I did a gig in Dorking in Surrey and during the afternoon I did one of my usual guitar workshops, and guess who attended both the workshop AND the concert....Newton Falconer. How amazing that all these years on he's the rising star that he is, and this ageing maestro has in some small way been an influence!( Photo © Phil Cosker ) 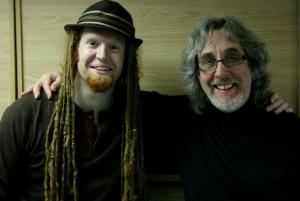 Acoustic magazine will be featuring me once more in the magazine which will now be published monthly. My column will still be bimonthly and will feature some of the pieces I wrote for Total Guitar magazine which eventually became the TOTAL GILTRAP book with the book publishers Mel Bay.

The pieces are basically snapshots of technique as opposed to complete pieces. There will be finger stretching exercises as well as tapping techniques and more.

I'm delighted that the mag want to continue to feature me. It's a good mag and continues to go from strength to strength. They will also be doing a news item on my Lifetime Achievement Award. So, all in all 2009 is looking promising in many areas.