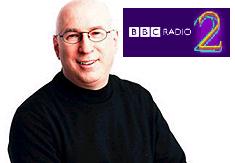 Just to let all my friends know that during the week starting September 8th for five consecutive days I shall  be the musical guest of Mr Ken Bruce and his Tracks of my Years feature, during his 9.30am - 12 show. This is basically a desert Island Disc type of thing where guests chose 10 pieces of music that have had an influence on their music and in many cases their life!

This is a real thrill for me, and Ken is such a great guy. The interview which was recorded several weeks ago down at the good old BBC, went so smoothly that Ken almost forgot a major part of the interview... that being the all important question. 'What are your plans for the remainder of this year?' I was able to mention three VERY important events, the first being the Brum Town Hall concert on September the 20th,the second one the album with Rick Wakeman, and thirdly the Guitar Exhibition at the Hub starting in November. Anyway once I had reminded him it all went without any further hitch.

I shan't give away too much info on what tracks I chose to show my major musical influences over the years but suffice to say that mention was made of a certain Mr Bert Jansch who had SUCH a profound effect on a fledgling young guitarist from South East London in the mid 60s!

Happy Listening folks.
Gordon
PS: If you miss any of the broadcasts, you can always go to the Radio 2 website here and follow the links to Tracks of My Years where you will be able to listen again after the event.

Gordon was delighted to see that there were great reviews of both the CD Secret Valentine and the Total Giltrap book in the June copy of Classical Guitar Magazine Go to the bottom of the page and click on the thumbnails to open and read the reviews.
Tweet