As of 24th June, Gordon is delighted to report that his superb video of Mrs Singer's Waltz, with UK Champion ballroom dancers Ian Sharpe and Victoria Lawrence, has been viewed over 5000 times !

Watch the video here if you haven't already done so.

Chatham residents were treated to a first class performance last night, with music old and new enthralling audience members from ages of 8 to 80. One 18 year old seeing Gordon for the first time was heard to say "the guy's amazing - why doesn't everybody know about him ? He should be world famous with talent like that ! " A question I'm sure many GG fans often ask themselves.
For a review of last night's concert in, please click here


From Brush and Stone - Update.

I have come up with an idea for the Brush and Stone album to have a vinyl edition as well as the normal CD release. I put the idea to Rick and the record company, as yet haven't heard back from them BUT Rick thinks it's a great idea, and suggested that we put a sort of questionnaire on our respective sites to see what folks think, and if the response is positive, then that would give Voiceprint the incentive to do it.

To that end I'm asking all my friends out there in cyberspace to see if they would indeed buy a vinyl edition of this important and unique release from Rick and I. I look forward to hearing from you, and fingers crossed we can make this happen. It would look fabulous and would be a landmark event in the lives of Giltrap and Wakeman! Please go to the Forum and vote there ( you need to be a member and Log In before you can vote - so it's the perfect excuse to join us ! ) or use the contact form to get in touch.

The past couple of weeks have been pretty memorable in all areas. First of all I started to come down with a rotten cold on Wednesday the 28th, I think it's called 'Man Flu.' It was one of those horrible runny nose jobs with a temperature (I think you get the picture), and my main concern was dripping water over my guitars mid piece! Fortunately I managed to keep this at bay during my Cumbria gig in Wigton, in fact under the circumstances I played pretty well, it must be something to do with my old fashioned 'the show must go on attitude,' either way it was a good one.

The West Street gig in Wigton is really good inasmuch as the two lovely ladies who run it have converted their house into a small intimate concert venue, and have plans to convert part of the house into a restaurant. They looked after us superbly with wonderful food, a great PA system and the offer of accommodation, which we didn't require as we stay with our friends Jacquie and Ian whenever we play in the area. I forgot to mention that apart from running this superb intimate venue, the girls also act as agent for a few well know folk acts...busy or what! You can see me performing Ives Horizon on YOUTUBE at this very venue. The lighting is low but the sound is great, and anyway who wants to look at my red nose......grin.…

The first gig 'north of the border' was at a lovely village hall in Middlebie. The cold was still with me but manageable in terms of running nose etc. The turnout was great, a full hose and Blackie my sound man was great guy who informed me that he was doing the sound for my New Galloway concert the following night, which was good news for me as he got me a great sound on both evenings.

The Catstrand in New Galloway is a brand new venue in the villages old school house. The last time I had seen the building five years ago it was just a shell, now five years on it's a beautiful art centre art gallery. The gig was being filmed that night by a guy who is a keen amateur guitarist and film maker who wanted to film the show in hi definition just for the sake of it. All went pretty well apart from my brain seizing up on Kaz which I had to abandon, and a rather 'jazzy' version of Giltrap's Bar! Apart from all that things went pretty well.

The remaining three dates went well apart from Hawick where the turn out was pitifully small due to the fact that there was a major County show running for a full week which meant that local folk weren't attending concerts and were more into watching horse trials and sheep shearing and the like, which is fair enough. There are plans afoot for a return visit outside of the festival period, in the hope that I shall get a full house next time. The venue was stunning by the way. Lovely people, great sound, etc.

My last two nights at New Winton was sheer joy. The concert was organised by Sally Thomas, who is herself a great flute and whistle player, her and husband Chris have become firm friends of ours over the last few years. Sally is in a band called Welcome the Stranger at who's gig in Preston Pans I did a little floor spot!

Being in this part of Scotland also gives Hilary and I the chance to meet up with our dear pals Judy and Mike Barker and their son Thomas. Judy has just released her first album 'Chanters Weave'. Judy is a fine pipes player and singer and has recorded a cracking version of one of my early songs 'The Passing of a Queen'. Do check out her MYSPACE page. The album was produced by Stevie Lawrence, a fine musician and producer, and there are plans afoot for Stevie and I to work together over the next year or so to produce a Celtic influenced album, with Stevie in the producers chair. Please also check out Stevie's album 'The Hidden Gem', I believe he too has a MYSPACE page and his own website. Special thanks go to Mike Barker for providing the PA and mixing the sound over those two nights. Also a big THANKYOU to my agent for all things 'north of the border' Sue Holton for organising the tour. There is another Scottish tour planned for later in the year so watch this space!

All in all a great trip, and one that will hopefully open many doors to more live work in Scotland and of course that planned Celtic album!


Half Man Half Biscuit !

No, not a revelation about the secret life of our hero Gordon ! Half Man Half Biscuit are a UK rock band from Birkenhead, active sporadically since the mid-1980s, known for its satirical, sardonic, and sometimes surreal songs and long championed by DJ John Peel. The group consists of Nigel Blackwell (lead vocals, guitar), Neil Crossley (bass), Ken Hancock (lead guitar), and Carl Henry (drums).

The band's musical styles often parody popular genres, while their lyrics are dense with cultural allusions, usually to UK popular culture and geography. We have recently discovered that their cd This Leaden Pall (1993) includes a track called Floreat Inertia which mentions Gordon in the lyrics !!  Click the file at the bottom of the page to read the lyrics. 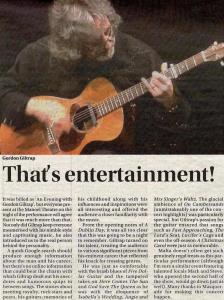 Following Gordon's recent triumphant concert in Malta at the Manoel Theatre, he was delighted to get such great reviews from the Maltese Press.

if you haven't yet read Gordons own thoughts on the trip and concert, please Click here