On Friday 25th April, Double Vision appeared on Friday Night is Music Night, live on Radio 2, with an estimated audience of 1 MILLION people! Read about it here

The long awaited live DVD of Gordon and Raymond Burley together as Double Vision is now available to purchase direct from Voiceprint
Gordon is delighted with the release, and says the sound quality is as good as the Double Vision CD.

You can now read about Gordon's 60th Birthday on a new page Click here. and see photos from his party in the Gallery Section.

Gordon writes:
"This was my third appearance at The Fleece in Bretforton Worcestershire. The Barn where I perform is pretty ancient, approximately 400 years old, and has an amazing atmosphere. The Barn has been used in the past as the pub when the main building was ravaged by fire a few years back, and is currently used for concerts, civil ceremonies and wedding receptions. It only holds about sixty people, and that's the reason why we go for two consecutive concerts each year, next year we are doing three!

The Fleece is the only National Trust pub in the UK, and Hilary and I stay over in the only room that the pub lets out, so it's a real treat for us, 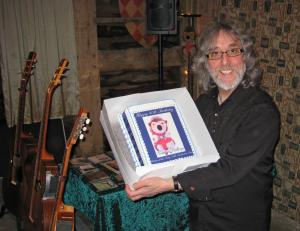 I'm the patron of the Tracy Sollis Leukaemia Trust, and have had been involved for about 15 years. It's always good to know that one is keeping the memory alive of this remarkable girl. This year over the two nights we raised £2,160.85  the money going towards buying electronic beds for leukaemia patients at the Worcester Hospital. Apart from money raised on tickets sales, there were funds raised from an auction and 'stand up Bingo'...great fun.

My thanks go to Nigel and Jenny at the Fleece for their ongoing support of this worthwhile charity, and of course to Sue Sollis and her trusty team of volunteers and trustees. Here's to next year. Oh and I nearly forgot. Because of my big 60 they presented me with a stunning birthday cake and a beautiful silver plectrum."

Thanks to Bob Wilson who spotted the following - He says, I was watching Tuesdays Eastenders, sad, I know, but 15 minutes into the programme I hear the unmistakable tones of 'Three-legged Horse' in the background as Bianca bonds with her children. Watch and listen here until Monday 21st April :
BBC iPlayer

Put the time-line to 15 minutes and listen to the background music. Alternatively, its shown again on Sunday 20th April.
Is that 2 lots of royalties?

On behalf of all readers of the website, I'd like to wish Gordon a very Happy Birthday today. We all look forward to many more years of friendship and great music.

In March 2007, Gordon played a superb concert in Glastonbury, which went out live over the Internet on Glastonbury Radio as part of their launch celebrations for the Radio station.

In view of this and Gordons upcoming 60th birthday on the 6th, I decided to email their presenter Ross Hemsworth and ask him to wish Gordon 'Happy Birthday' and play something by Gordon. Ross duly obliged and was very complimentary - to hear the Radio mention play the MP3 file at the bottom of the page. There were actually two parts to the mention, about 10 minutes apart, which I've joined into one with a tiny gap between.
Sue 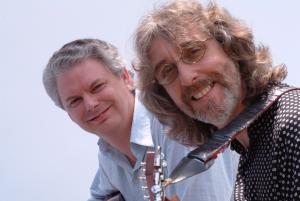 My good friend and musical partner in Double Vision, Raymond Burley has just had a cracking new website built by our very own Sue Holton.

For all you lovers of great classical guitar playing, and for those of you who have enjoyed the Double Vision gigs that Ray and I have performed over the years,  please give this new site a look over.
Just go to www.raymondburley.com

It has news about all of Ray's recent CD releases including of course the superb The Long Road Home album. It has news of his upcoming solo concerts and of course mention is made of our debut DVD - In Vision just out on Voiceprint. These few items are just the tip of the iceberg, this site is VERY comprehensive!

As I type this I'm preparing two tracks to be recorded at Paul White's studio in Malvern on the 1st and 2nd of April, and added as bonus items to our re-released Double Vision album (how's that for multitasking)! due out later this year on Hypertension. As you know, this album was originally put out on Voiceprint, but in all honesty it wasn't really their thing being far too classical and specialist for them, but thanks must go to Rob Ayling for getting it out there in the first place, bless him. Anyway, the album will be re-mastered with two new DV arrangements of Tears of Joy and Kaz. The whole album will be re-mastered with brand new artwork, so look out for that when it's released later this year. Ray has been urging me to come up with a duo arrangement of God Save the Queen as an extra bonus track for the album, but I'm not too sure about that one!