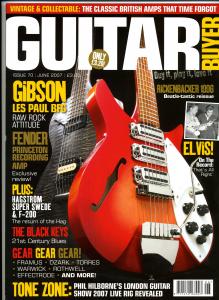 The June issue of Guitar Buyer Magazine features a three page article on Gordon. Mark Alexander chats with Gordon about his guitars, his tunings and his rig.

Available from all good newsagents now, a snip at £3.20 ! 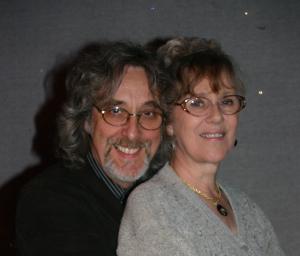 As Gordon told me when I checked how long...

So congratulations to you both, and here's to many more glorious years to come ( Sue - webmaster)

Every Tuesday night Desmond Carrington dips into classics from all musical genres from the 1920s to the present day during his Radio 2 progamme The Music Goes Round. On this weeks show ( 15th May 19.00 " 20.00 ) he included Gordon playing A Dublin Day from the cd Captured From A Point In Time. He then gave a brief description of Gordon's playing style and influences. 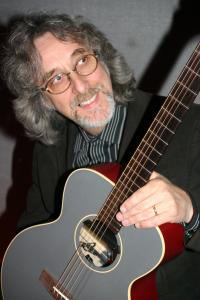 On Thursday the 10th of May I collected the Polymer guitar that Rob Armstrong has been working on for some time. My contribution as been the body shape design, the fingerboard width and scale length, Robbie did the real genius work of constructing it. And what a guitar it is!

It looks stunning, but more to the point it really has a great sound. When you begin to realise that the table is made from polymer plastic and NOT wood, the sound it produces is truly amazing.

It has taken the team, and in particular Dr Owain Pedgley at Loughborough University and Rob Armstrong eight years to reach this point, and I for one find it very exciting, and I'm proud to be associated with the whole project. Being the traditionalist that I am I would have never believed that it would be possible to produce such a fine sounding instrument in this way, and I think I speak for all my great luthier friends that wood is still the best, but only time will tell if the need to look for alternative materials will be there in the future.

Certainly the idea of making instruments out of material other than wood isn't a new thing. Ovation guitars have been in this arena for many years, and indeed twenty plus years ago I owned a fabulous sounding Adamus guitar for a while. This guitar was made from carbon graphite and had a really good and distinctive sound, but to my ears it didn't really sound like wood, unlike this latest creation of Robbie's which to my ears DOES sound like wood.

I'm currently in my studio at home recording some old favourites for an album that will hopefully demonstrate the sonic qualities of this instrument, and I'm pleased to report that it has taken to the microphone very well. It sounds like I'm speaking about a new born infant, but in it's own way in guitar terms that's what it is.

I plan to take it on the road soon, with the guitar making it's first appearence on stage in Chatham on 17th May, so any one attending my upcoming concerts will be able to judge for themselves!

NEW PAGE ADDED
A new page has been added to the Tips and Tabs part of the News section, giving a list of tunings for some of Gordon's best loved pieces. Click here

Well, I'm thrilled to report that the concert I did for Mr Wakeman's Four Churches Festival on 8th May was a great success, and the five pieces he and I performed in the second half really raised the roof to the point of a standing ovation!

We performed Maddie Goes West, Isabella's Wedding, Down the River, Fast Approaching, and Heartsong. Down the River and Maddie were particularly good. The whole thing was filmed for a CD/DVD package planned for release later this year on the Voiceprint label. This long awaited project with the mighty Rick has been a long time coming, because of our individual commitments, but I firmly believe that fans from both camps will be delighted with the outcome. 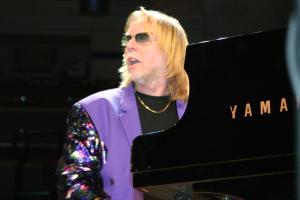 Of course on many levels this is a perfect coupling! We are both good friends, both are members of The Grand Order of Water Rats, both love classical music, and both believe in the profound importance of communicating with our audiences.

I shall keep you posted on events as they happen.

Watch this space my friends because I firmly believe it's going to be VERY special.

What made these last few days in Suffolk that much more special for us was the time spent as hosts of the lovely Roy and Debbie Hudd. Roy is without a doubt a national treasure, and we thank he and Debbie for being such great hosts. Roy is appearing on Thursday at the Four Churches Festival in a Just a Minute sketch with Nicholas Parsons and Ian Lavender. Click here for the concert guide for Tuesdays gig for more info.

Warmest of Regards to you all.

P.S. Hilary bought as a joke a special GRUMPY hat for Rick who was delighted with it and he plans to wear it for the remainder of the festival! 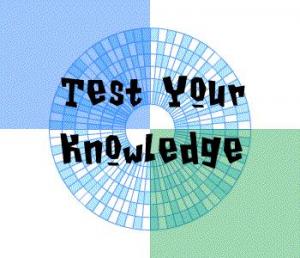 There were 2 entries with perfect scores, so Gordon drew one winner at random.


The person being crowned
"Most Knowledgeable Fan 2007"
is
BOB RAY

Bob and his lovely wife Gill have had a lot of worries of late. Their son Tim underwent major eye surgery recently and has fortunately come through it, and hopefully will regain his sight over a period of time. They are a lovely family and do a heck of a lot for their local community in their part of rural Lincolnshire.

Bob and Gill have hosted us on a number of occasions and I have performed in their beautiful village twice now, and on top of that Gill makes the best fruit cake on the planet...grin...

So congrats to you dear Bob, and give Gill a big hug from us, and a manly hug from me for our Tim.


The runner up, with an equally impressive score was Trevor Raggatt, so in recognition a consolation prize will be award to Trevor.

Prizes will be on their way to both Bob and Trevor shortly.

Thanks to all of you who took part. We hope you enjoyed finding out more about both Gordon and his new website.


IF YOU HAVEN'T VISITED THE SITE FOR A WHILE YOU MIGHT LIKE TO READ THE APRIL NEWS UPDATE PAGE TO CATCH UP ON ANYTHING YOU'VE MISSED.