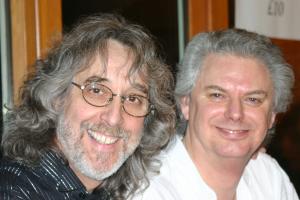 DOUBLE VISION DVD
"I'm delighted to report that the recording that Ray Burley and I did in January of this year in a freezing cold church in Lincolnshire as now been mixed and sounds WONDERFUL. This is great relief to us, and we firmly believe that our debut DVD for Voiceprint will be something special. The DVD contains twelve tracks recorded in the church, an interview section and live footage taken from our Sittingbourne concert last year. Harold Houldershaw is delighted with it all and is determined to make this DVD a work of art!"

As I type this I await a photographer called Richard Ecclestone who is driving up from Cambridge to do a photo shoot with me for Guitar Buyer magazine. The interview was done about a month ago and we just need some images to complete the picture.

I have been agonising for some time about my current image (whatever that may be) and to that end I grasped the nettle, or more to the point the razor, and trimmed my rather bushy beard down to a more manageable level. I have eliminated the side bits and have just left the beard and tash in place, and I'm so pleased I did, because I don't look half bad ! Obviously the results will be seen in the mag at some point but I was pleasantly surprised at what lay beneath the stubble!

The next step I guess is to get some more up to date photos done for publicity purposes. Don't get me wrong I still look pretty much the same except for the missing grey face furniture that has adorned my face for all these years.

My mobile has just rung and Richard is lost! When he arrives I think a large coffee will be the order of the day and then we get down to the business of taking shots of the guitars I used for the Guitar Maestros DVD. I plan to make my two stunning Fylde guitars the main thrust of the piece.

The May 2007 edition of Record Collector Magazine features a 2 page spread about Gordon entitled "The Visionary" It starts with an overview of his career to date, a great photograph, then an interview with Tim Jones reveals more information on Gordon's past, current projects and future plans. It also delves into Gordon's thoughts on other musicians, the possibility of an autobiography at some point in the future, and a couple of surprising things you may not know about Gordon! I won't go into too much detail here, you'll need to go and buy the magazine !!

"I dunno, because of SO many things happening at the moment, it didn't occur to me that the launch of Glastonbury Radio would be a 'live' affair. I thought for some reason that it was going to be recorded for broadcast at a later date, it was only until after the event that I was informed that it was going out 'live' to the world! Good job I didn't know otherwise I would have been even more nervous than I was !

The whole thing I believed went well, apart from my giant PA system being too loud for the first few tunes (75 watts a channel). During the interval a very charming lady, who incidentally was the one who requested I turn it down because the volume wasn't doing me justice, requested an all acoustic piece. Me being ever the obliging type attempted The Lord's Seat, which for my money didn't really work and gave the sound guy a nightmare of a job with the increasing drop in volume!

All in all it went well, and Glastonbury is well... Glastonbury and full of people that look like me, so I didn't feel, at all out of place. When I arrived there was a kind of Mind and Spirit exhibition on full of healing crystals and fortune tellers, well just the one actually. A charming lady who offered me the next time I'm in the area a free reading...Great fun. THANKYOU Glastonbury and all the folks associated with the event.

My dear pals Dave and Val kindly sold my Merch for me, so that was a tremendous help. Thank you Both." 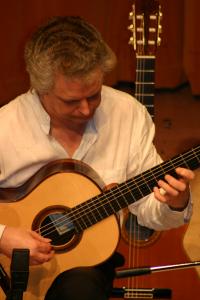 I'm thrilled to report that Ray Burley has finally finished his album The Long Road Home. This is the album that Ray has been working on for sometime and eighteen of my pieces and his personal favourites have now been committed to tape or digital format. For a composer this is a great accolade, and I'm deeply touched by the gesture.

Maestro Burley has brought something new and heartfelt to these tunes of mine, and I can't wait to see the finished thing in CD form in a few months time. At this point in time it is scheduled for release on the German label HYPERTENSION.

Look out for that one all you lovers of virtuoso classical guitar, it really doesn't come any better than this, because as you know, Ray is a VERY special musician."

"My book of pieces from the Troubadour Album is nearing completion, and will be published by my friend classical guitarist extraordinaire Steve Marsh on his label. Steve has already published the Double Vision duets book, and plans to publish on his Lathkill label the eighteen transcriptions that Ray Burley did for the Long Road Home CD.

We shall be launching the Troubadour book in Birmingham on Thursday the 12th of July at one of this countries largest music stores Professional Music Technology - PMT for short.

P.M.T. Birmingham, voted "Best UK Retail Store" at the Music Industries Association Award ceremony in Nov 2006 is the UK's largest music Superstore. Over 10,000 sq ft of guitar showroom featuring "THE WALL" a 150' by 20' wall of over 600 of the worlds best guitars!!

"On the 27th of January, I appeared at the Dorchester Arts Centre. The concert was recorded, and to cut a long story short this concert is being released on the brand new Panacy record label as a double CD offering.

This will be a completely unedited warts and all package, and will be in the true sense of the word my first ever untouched live album complete with fluffs, jokes, coughs, etc., etc.

The album is called GORDON GILTRAP, AS IT HAPPENS.

It will contain loads of live photos courtesy of Sue Holton, extensive sleeve notes, and stunning new artwork by our friend and artist Jan Leytham. Everything is in place, and we just await final artwork from Jan and away we go.

The label is the brain child of Graham Hazelwood, gentleman and writer. My album will launch the label, and many exciting releases are planned including ANOTHER TIME ANOTHER PLACE an album by that fine Harpsichord player and pianist Mr Richard Leigh Harris.

This will be a collection of GG compositions arranged for piano and Harpsichord and played in Richard's unique style. There are also plans afoot for several releases by many of this countries finest young virtuoso guitarists. "

"Whilst I was there I bumped into a few old friends like John Goldie, Simon Dinnigan, Woody Mann,Bernie Marsden. Tristan Seume, and my friends at Fishman pickups Larry Fishman, Rick Nelson as well as new friends on the Martin guitar stand Chris Martin, Jack Stoltzen and many more.

I also was offered a very attractive string endorsement deal with a major manufacturer, which I may accept !" 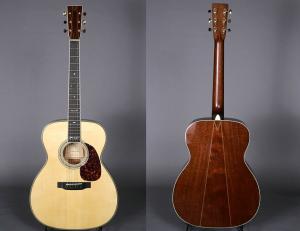 "I am now the proud owner of a very special Martin guitar. It's called an M3M and was designed in conjunction with Sir George Martin. I have owned many Martin guitars in the past but believe me this one is VERY special, a stunning Martin M3M George Martin signature guitar. That guitar along with my Lonnie Donegan signature model form two of my most prized possessions in the guitar collection.

The spooky thing about both those guitars is the fact that they are both no 43 in the serial number range....Weird or what! The M3M is number 43 0f 127 made, and the Lonnie Donegan is number 43 of 74 made worldwide.
What a luck bunny I am to be the proud owner of some of the finest guitars in the world made by the finest makers. Rob Armstrong. Dave Hodson who sadly passed away recently, Roger Williams, Roger Bucknall and now the Martin. God bless em all !"

OTHER NEWS
"At the moment I'm in the middle of re learning older material, and pieces that I haven't even played in front of an audience. Currently I'm trying to get to grips with Three Legged Horse! I wrote this for the Drifter album on a guitar made by the late Dave Hodson, that famous maker of gypsy jazz guitars who sadly passed away a few weeks back and whose funeral I attended along with John Etheridge, who is now the proud owner of that original guitar that I used for the recording.

John absolutely loves it, and ironically it was in the hands of Hank Marvin for a few weeks a couple of years back when Hank was touring in the UK. At this point in time I'm practising Three Legged Horse on the prototype that Dave made for me a year or so back. It's a strange feeling playing an instrument made by someone who is no longer with us! Ray Burley until very recently was playing a Martin Fleeson guitar. Martin was another maker who died tragically young.

Once I get to grips with TLH, I shall start tackling some of the newer pieces that I have written of late. It can sometimes take years of playing to really do justice to a composition, I just hope these newer pieces come together quickly, because quite honestly I haven't got the time to spend perfecting all this music that accumulated over all this time...grin."

AND FINALLY.....THIS MADE ME SMILE

Gordon always has a fantastic time with Jack his 7 year old grandson, who is learning to play guitar.

Hilary told me " Jack is SO into it all. He recently asked Gordon to play his fastest bit of music, so he played "Tailor Bird" - Jack screwed up his face and asked, "Who WRITES this stuff ?" What can you say !