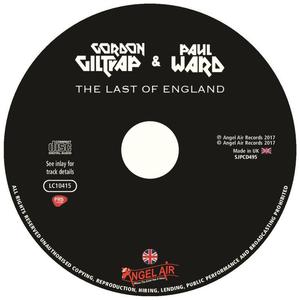 I can't begin to tell you what this new album means to me. It is nothing short of a miracle that this album exists, because I had no plans whatsoever to release an album. This decision was made well before I became ill because I saw little point in releasing an album of yet more stand-alone tunes in a similar vein to past solo albums.

Then I got to thinking about pieces that I had written over the past two plus years, and to my amazement it occurred to me that I had accumulated enough material along with the possibility of re visiting The Brotherhood Suite for a new album. It was then I approached Paul Ward to see if he fancied coming on board with me to create something special. Thank goodness he did and the end result in my opinion is my most emotionally charged and dare I say it "spiritual" work to date.

The front cover artwork is of Ford Maddox Brown's beautiful painting The Last Of England. We licensed it from The Birmingham Museum and Art Gallery for a period of five years! It is so good to have a cover that truly reflects the feel and content of the album.

It would be pointless giving a blow by blow description of each track because all the information is there in the sleeve notes.

My personal favourites are of course pieces from "The Brotherhood Suite". "Sadie in May" for my lovely daughter." Ania's Dream" because it was one of the last pieces that Paul arranged and took the original solo version to a different place in my mind, and was commissioned by dear Piotr over there in Poland. I sent this track to Brian May who declared it "Beautiful". "The Anna Fantasia" which took me months to write and record for a special lady. "This Fathers Love" has a beautiful history to it. The most uplifting and joyous piece on the album is "A Promise Fulfilled" commissioned by our good friends Trevor and Thea, and is probably the most prog rock of all the collection with the wonderful fiddle of Ric Sanders and Paul's stunning playing. Every track is special to me and all hold fond memories, but one or two were written and recorded under very difficult circumstances laced with tears.

My thanks and gratitude go to my dearly beloved Hilary for everything and to Paul Ward for making a dream become reality. Final thanks to Mike Stranks for recording "A Promise Fulfilled" and for introducing me to Paul Ward.

Finally to all the special friends that have been there with us through the darkness. Carrie Martin, Anne Sutcliffe, Sue and Mike Holton, Kim Quance, Caroline Rumsey, Malc, Karen, Jamie, Kaz, Braden, Ruth, Simon, Rachael, Sadie, Paul, Chris, Sally, Ray, Roger B and Moira, Paul Brett, Michelle, and SO many more, including of course Peter Purnell from Angel Air who have done a fine job in helping me bring the album to market.

The album was released on January 20th on Angel Air Records, and has already garnered wonderful reviews, and is available from all good record stores and Amazon. Its release marks the record company’s 20th anniversary!

The link below will take you to an online review by Get Ready to Rock and there is also a link to a 1hr radio interview, well worth a listen.

There was a nice review in last month’s Guitarist Magazine too.

There is excellent accommodation nearby at The Old Hall Hotel, Main St, Frodsham, WA6 7AB at very reasonable rates.

Further details and a programme for the weekend will be available upon registration and payment of a non refundable deposit of £100.

In 2017 I'm also planning to hold what I call "sharing days" at a venue close to where I live in Sutton Coldfield. This will be separate from "The Gordon Giltrap Guitar Academy". The first "SHARING DAY" date is now confirmed as Saturday 25th of February, from 10am onwards.

The plan is to accommodate between 10 and 12 players who want to spend the day sharing all aspects of my music, my technique, composition, my advice on guitars, open tunings, nail care (yes even nail care) equipment, in fact as much information as I'm able to impart on the day. This will be aimed at mainly acoustic players but all players, electric or acoustic are welcome.

At times there may be members of the Academy to assist in any way they can. I'm really looking forward to it as it should be a fun INFORMAL gathering of players who like me love this instrument of ours.

This is a completely separate gathering to my more formal weekend courses planned for early spring, and obviously a different price structure at £100 for the day.

I look forward to hearing from you. Currently there are 2 places remaining. My good friend and legendary guitar maker Garry Southwell dropped by the other day with this beautiful steel strung version of his Bog Oak A model guitar to see if I would borrow it to see how it records. This I did and declare that it sounds lovely and has a sound like no other. Very classical in terms of power obviously but the trebles have a lovely resonant quality to them. The proud owner was more than happy for me to studio test it, but I bet he couldn't wait to get it back!

For those of you not familiar with Garry's work. He has been an established maker of instruments for many years his main customer is the great Julian Bream and also counts among his customers Paul Simon and has done work on John Williams's Smallman guitars. Here is a recent acquisition bought from a Cash Convertor shop at a price that I couldn't refuse and had to take it home with me.

My good friend Michael Gough guitar builder supreme took it away and did some work on it. It is a Gordon Smith British made guitar that many players have a great fondness for. Midge Ure has one and just loves it. Gordon sold the company recently but they are still making the same guitars to the original high standards. The neck on this guitar is one of the most comfortable user friendly necks I have ever played on. This is a recent acquisition. A 1966 Levin LN 26 in amazing condition for its age. Pete Townshend owned one in the early days. This was the coveted affordable instrument for me in the early days, but I could never afford one. Ironically my first decent acoustic was a Hagstrom which I used to record my first album and like the Levin was made in Sweden. I'm absolutely thrilled to be on the final track of this hilarious album with the legendary John Shuttleworth. If you are a fan of the man you will love this CD. What sort of genius can come up with songs of this nature eh?

Sutton On Sea is basically The Carnival with fun lyrics, and me just chatting as we recorded it live in the studio.

If you are in Sheffield on March 30th do come to the show and hear this being performed "live".

Keep picking and happy New Year one and all.