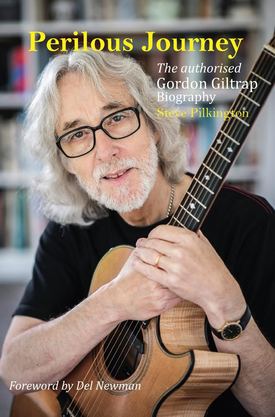 Well, what a time it has been since last news page!!

On October 5th in the beautiful Oxfordshire town of Woodstock just up the road from Churchill's birthplace Blenheim Palace at the aptly named Woodstock Social Club was the official launch of my biography PERILOUS JOURNEY.

It had been a difficult week having lost a good friend on the Wednesday and then having to pull ourselves together and be there for the Friday launch was in itself a good thing because it gave Hilary and I a focus to help to have something positive as a temporary distraction.

We arrived at 4-pm for me to sign just over a hundred books which were pre ordered several weeks prior. After doing that task I had to sound check for my good friend Dave Ford who very kindly had driven all the way from Derby with his superb sound system. All he wanted in return was a signed book and some petrol money bless him. After the sound check it was time to try and grab a quick takeaway before the evening kicked off.

I'm delighted to report it all went swimmingly well with the author Steve Pilkington joining me for the second half chatting about key elements in the chosen chapters with me adding various pieces that were appropriate to those chapters. This was followed by a Q and A session from the audience. There were about 20 books sold on the night which was a great start to these book launch evenings of which there are three more to come, the next one being in Chichester then Derby and finally for the Classic Rock Society in Rotherham. (Dates on the website)

One of the surprise highlights of the evening was to see Sue and Mike Holton strolling down the street towards us just before the show. They had driven all the way from Ramsgate in Kent to be with us on this special evening, and also to take some pictures and do a bit of filming. Great friends indeed, along with so many other loyal pals who made it on the night including Andy Smy who had travelled all the way from Barnstable, Mark and Jane Day from Barnsley, Keith Meredith from Northampton. My old teenage friend Don Prested from Essex who I hadn't seen in at least 52 years, who told me he had my very first recording on an ancient Grundig tape recorder! I look forward to hearing that one day (or maybe not). Nick, Judith and Rose Hooper, Paul Steiner and his daughter, and Andy Rawll from Record Collector Magazine whose recent interview (below) is now on YouTube.

The turnout was lovely with a packed room full of lovely people. My thanks go to Rachel from the Woodstock book shop for organising the evening, Dave Ford for providing the PA, Steve Pilkington my author and many many more who made the effort to be there.

Perilous Journey is available direct from www.wymerpublishing.co.uk or still from Wymer but via Amazon.co.uk

My Sharing Day on Saturday October 20th was a bit special in as much as I had planned to do a FREE SD for some time as a way of saying thank you to all my loyal students who have attended teaching weekends and SD's since they first started. The venue was the usual Scout Hall in Mere Green with a fantastic turnout. 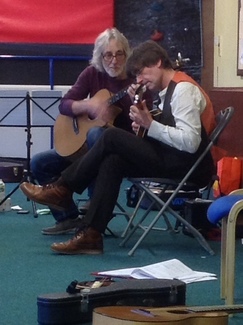 My special guests were dear friends Hilary James and Simon Mayor. Simon is without a doubt one if the finest mandolin players in the UK and is also a fine fiddle player and superb guitarist. Hilary is a lovely singer, guitarist and bass player. Students came from as far as the North East and would you believe Malta!

The chosen piece was Tears of Joy, not an easy piece in anyone's book including mine and I wrote it!

The day was divided up into hourly teaching sessions followed by individual performances in the afternoon culminating in our special guests doing duets with Hilary's delightful voice and Simon's virtuoso mandolin and guitar playing.

There were lots of questions afterwards and a great time was had by all. I have had SO many amazing guests at these SD's it really is hard to choose standout performances because all of them were magic in their own way. 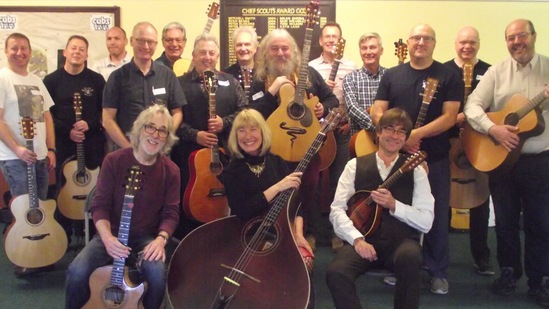 Here is a name check of thanks to all who were there. 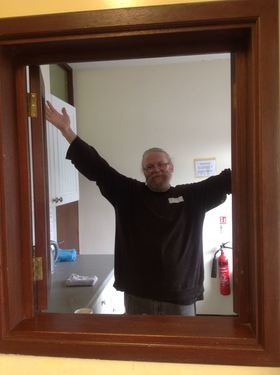 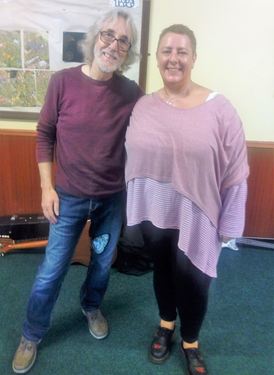 My thanks go to Malc Welch (pictured left) who was on tea and coffee duties as well as being our resident photographer for the day. Also lovely to see Malc's other half Karen there, without whom Malc couldn't attend as he doesn't drive, so special thanks to her, a truly lovely person. Karen also creates beautiful jewellery out of my old guitar strings! Also nice to see their friend Helen (pictured right) who travelled all the way from Worcester to join us along with Dorothy Fenech, David's wife. 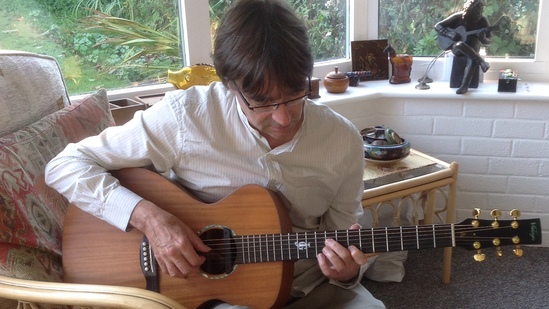 Hilary and Simon stayed over and much music making and catching up ensued that evening and the following morning. Such a joy to have them stay with us, fantastic company.The picture above is Simon playing my Jamie tribute guitar. 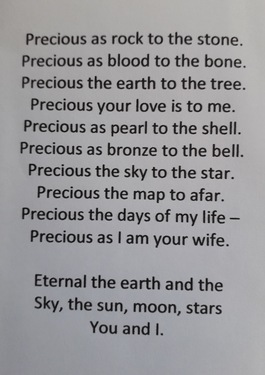 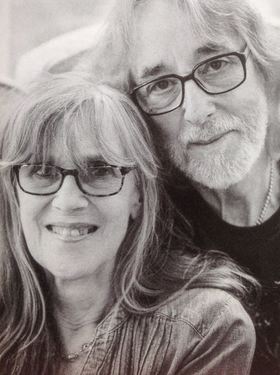 I posted this on Face Book, but wanted to share it on my News page.

This is the woman who says she has no real creative talents. This poem never fails to make me cry, it is SO beautiful and heartfelt.

I am so lucky to have her in my life. Without her all that good stuff would never have been written.

I love this picture of Hilary and I taken from my biography. 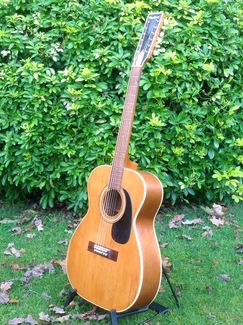 This is one of a pair of 12 strings that Steve restored for me, and he personally thinks that this one sounds great, and if he thinks that is the case then that's fine by me. The man knows a thing or two about guitars and particularly 12 strings. Will I use it? Who knows but it's fun having it with me for the time being! 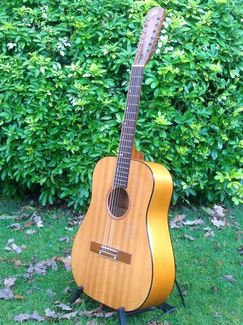 Here is the other recent acquisition this time a mid-60's Swedish made Levin 12 string bought from E Bay restored by Steve Phillips. I can't help it, I just still love the sound of a good old 12 string. This one is all maple body and spruce top and has a much bigger sound than the US Harmony but with equal sustain. I shall enjoy it for a while and then who knows eh!

I currently own a stunning Levin sunburst six string which is starting to sound truly gorgeous and I'm rapidly bonding with it.