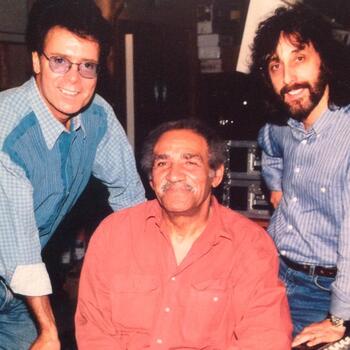 Last month brought sad news of the passing of my dear friend the great Del Newman. I'm devoting pretty much all of this month's news to this legendary man of music with as many memories of him as I can muster.

Del was born in London in 1930 to an Irish nurse and an African father. His father was a surgeon who obviously met his mother during the course of their work. The end result was this amazing child born out of wedlock that was to become Del Newman. His birth name was Derek Morrow.


Sadly his mother wasn't able bring him up so he was adopted by the Newman family and ironically was brought up in the same part of south east London as I was. Plumstead where he was raised was just a half hour bus ride from Lewisham and Deptford where I grew up. Del being a very bright boy attended the Rhone grammar school in Blackheath which incidentally later on was the school that Albert Lee attended!

I shan't go into a chronological breakdown of his life, but from what Del has told me it was a pretty extraordinary life and in many ways a charmed one. I think because of his handsome good looks, presence, height and charisma he never to my knowledge ever suffered any colour prejudice throughout his life and was very popular with everyone he met. He studied the cello and composition at Trinity College of Music and eventually became a full time cellist. I foolishly asked him once if he was a good cellist, and his reply was..."well I made a living out of it for 30 years" which firmly put me in my place!

We first met in 1970 when I was managed by Miles Copeland and he had secured a recording contract for me with MCA records with Derek Lawrence producing. It was Derek who recruited Del to do string arrangements. A meeting was arranged at Del's flat in Earls Court to discuss the songs and then take it from there. That first meeting (the first of many) was pure joy as I sat with him at the piano and played the material, with him working out my tunings and constructing the right chord sequence in order to arrange the strings. During that first meeting the phone rang and he excused himself whilst he took the call. When he returned he said "that was Steve on the phone and he says hello"....it was Cat Stevens. Spending time with him, it was apparent that his love for music just poured out of every particle of his being.

Being in a recording studio listening to his sublime string arrangements was for me like a spiritual experience. I had never heard an orchestra close up before, playing along to my songs. It was truly fantastic and unforgettable, the pinnacle of course being TROUBADOUR in 1997.

Going back in time to 1975. I was living in London and had invited Del and his then wife Hilary round to our place for a meal and to listen to some demos of material that eventually became the VISIONARY album, in the hope that he would like to get involved in arrangements for the project. After hearing the music he turned to me and said that as much as he liked the music he couldn't commit to it because for him he would rather devote that time and energy to his own music. As disappointed as I was I fully understood and respected his decision.

Fast forward to 1997. I had just secured a deal with KTEL records and had an opportunity to use strings again. So once again I approached Del and this time it was a resounding YES, under one condition that he not only arranged the parts but produced the whole thing! It was a no brainer and I jumped at the offer. Del then told me that after Visionary came out, he heard it and regretted his decision not to work on it and thought if ever there was an opportunity to work with me again he would do it. He was so passionate about the collaboration that he even came out of retirement and worked within the relatively small budget to make the album. The end result was of course sublime.

The studio chosen for the recording was Snake Ranch (sadly no longer there) and co-owned by my old friend Richard Harvey he of Gryphon fame! Del had assembled some of the finest musicians in the UK for the sessions including the late great Jack Rothstein violin, Paul Pleeth on cello whose father Bill taught Jacqueline Dupre, Chris Lawrence double bass who played on that MCA album in 71. Hilary and I can still remember listening to On Camber Sands with tears in our eyes, it was so beautiful. With Sir Cliff adding backing vocals at a later session and Del asking him if he still played golf! Such memories are made of these eh!

Since those heady days Del and I had kept in touch. Del in his own way was a bit of a gypsy, always on the move from place to place and had over the years lived in France, Kent, the Isle of Wight and then finally settling back in Wales mainly to be close to his son Jessie who sadly passed away a while back. Del finally moved to the Welsh bungalow which was his home until his passing. 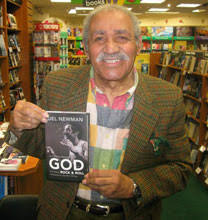 A few years back he found a book company to publish his memoirs as a ‘back room boy’ in studios around the world working with some of the biggest names in show business from Cat Stevens through to working with two Beatles, Paul and George. The book was entitled A TOUCH FROM GOD, ITS ONLY ROCK AND ROLL. 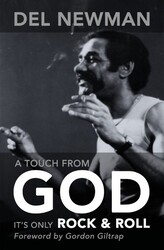 Imagine my surprise when he asked me to write the forword which I of course felt very honoured to do. He said I was his first choice and Elton would have been second! I returned the compliment by asking him to do the very same in my biography by Steve Pilkington PERILOUS JOURNEY.


In October 2015 Hilary and I attended the BASCA Gold badge awards where Del was going to be a recipient. Del was there with his proud daughter Delphi to witness this special occasion. Del decided to tell a true amusing story about when he was at the London home of Paul and Linda McCartney. Young Stella had returned home from school and was very upset with one of the girls at her school, saying that her dad was richer than Stella's dad. Linda comforted her by telling her to take no notice, but Stella insisted that it was true because the girl’s dad was an accountant!

Del always said that Hilary and I were like family, which touched us very deeply. Words can't express the towering genius of the man and how much he meant to me and made an indelible mark on my heart.

The time he stayed with us brings back wonderful memories and our day out in Stratford upon Avon. When he arrived at our house he produced the original string part for one of the pieces from TROUBADOUR, THE KERRY DANCERS which was his favourite from the album. He then went on to tell us that out of the hundreds of scores he had written for artists over the years, this was the only one he ever kept. The rest he just burned! Can you imagine that? Original scores from Paul Simon's Hearts and Bones album, scores from a George Harrison album and dozens more. He then decided one day to take all his gold and platinum albums down to the local tip! I could have wept when he told me. I would have loved them. I think he was trying to sever any link with his past life for reasons only known to him!

I still can't believe he has gone and I won't be hearing his deep warm voice on the phone whenever I ring. I never stopped being in awe of him and will never forget a late night conversation at one of his Welsh cottages when he told me that he would work with me on ANY future projects I was involved in if I so desired. Sadly this never happened because I would never be in a position to cover the cost of string players, and sadly since TROUBADOUR I never have, but it was wonderful to know that the great man thought enough of me to make that generous offer.

Del never professed to be a spiritual person, but his music for me contained a mountain of spirituality with his beautiful musical creations.

One final story. I got a call from Del one evening to tell me that a documentary had been made about the making of Elton John's classic album GOODBYE YELLOW BRICK ROAD and that he was featured in it. He said because of the poor tv signal where he lived it made it nigh on impossible for him to record it on his video machine and would I be kind enough to record it for him and send through. This I of course did and was thrilled to do so. It was a great documentary and Del's part in it was wonderful.

Sadly because of Covid and myself being an “at risk" person, Hilary and I couldn't attend the funeral. But we were there in spirit to give this remarkable man and musician a great send off. I know in my heart that his passing will have a deep effect on so many fine artists around the globe that worked with him.

Yusuf Islam sent these few words on hearing the news. They are quite beautiful.

"Oh, that’s sad, His musical touch was so valuable to the songs we did.

May God the granter of wishes give him everything he desires in the everlasting garden."

Recently I was able to share some precious memories with my old friend the fine singer songwriter Mike Silver. Mike and I were as emotionally close to Del as it was possible to be. We had known him for as long as each other and had been privileged to have worked with him. Ironically Mike and Del worked together on an album of his also entitled TROUBADOUR.

The world is a poorer place with his passing, and we shall never see his likes again. 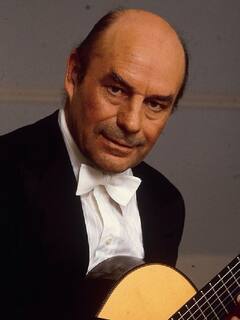 Two greats of the music world have left us the same week. Del Newman and now the great Bream. I was so honoured to meet him after a concert a few years back. The great man was and always will be the benchmark for great virtuosity and passion in playing his chosen instrument. He was a true inspiration to generations of aspiring guitarists. 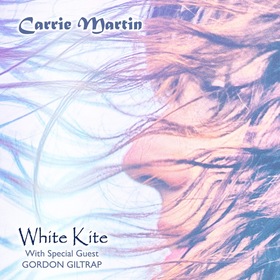 My new album Entity is due very soon and the wonderful thing is that both single releases from this collection feature my wonderful friend and mentor Gordon Giltrap.

The first being a cover of the stunning & iconic 'Time After Time', a song very dear to my heart and the second being my original track 'White Kite'.

'Time After Time' is out now on all major platforms. (see Aug 2020 news) There is an official video and a small documentary video explaining the history of our friendship and the reason we covered this wonderful Cyndi Lauper song.

Chatting casually to Gordon I mentioned that I felt 'White Kite' needed a lead guitar solo, would he fancy putting his acoustic aside and picking up his Strat?

That’s exactly what he did and it’s without doubt very magical ... can’t wait to share this with you all folks.