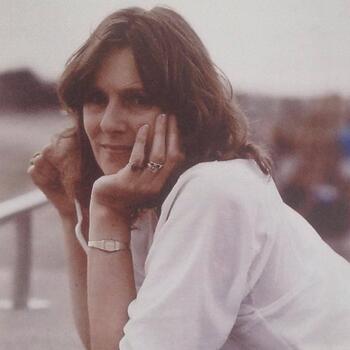 I came across this stunning photo of Hilary some days ago, and thought how great it would be if any artistic people out there would fancy doing a watercolour painting of this image. I know it's not very high definition but probably good enough to create something.

So this is a sort of Water Colour Challenge, the winner will receive as a prize the vinyl and CD version of Paul Ward and mine's Last of England album.

I look forward to seeing the finished results.

On Thursday the 21st of last month I did my first full one hour live streaming. I was invited to guest on the Facebook Page UNDER THE GHOST LIGHT created by members of the theatrical group Beyond the Barricade. They said it would be a nice idea because I would be reaching people who weren't that familiar with my name and be exposed to a wider audience.

I have to confess I found it quite nerve wracking playing to just myself in my music room without having a live audience there, but I guess this is the way things are going since this terrible thing has hit the world and really is the only way to share my music at this time.

Things were going quite well until I got to The Dodo's Dream and about one third of the way through I made a complete hash of it and decided to start again. Once again I screwed up, stopped and started again this time I managed to get through it. But this is the weird part. Unbeknown to me just before I screwed up the first time, the internet threw a wobbly and froze for about 3 minutes and then restarted. I only found out until afterwards when Carrie Martin told me. So, as far as viewers were concerned I hadn't messed up at all! They saw me start and then resumed after the Internet froze assuming I had played note perfect from the start. Someone up there must have liked me that night! So apart from that potential disaster that no one saw it went pretty well.

I plan to do more on a regular basis and thanks to Carrie Martin who is now a veritable expert at this sort of thing now and gave me the technical advice on how to do it, I'm feeling pretty confident that can do hopefully many more in the future.

The plan is to set up a donate button on the page and take requests in advance of the performance to make the whole thing that much more personable.

Many years ago in the long distant past I was privileged to be on a children's magazine show called Magpie. At that time the show was presented by Mike Robertson and the beautiful Jenny Hanley the daughter of actress Dinah Sheridan and actor Jimmy Hanley. My main memory of meeting Jenny was her telling me that she preferred to wear men's after shave as opposed to traditional woman's perfume. Funny the things that stick in one’s mind!

Fast forward to the present day and Jenny and I have become friends on Facebook and now chat regularly on the phone during this current lockdown. Jenny is a great character, has a wonderful laugh and wicked sense of humour.

For some time I have had a desire to set to music a beautiful poem that Hilary wrote for me many years ago which I call PRECIOUS taken from the first word of each line. I wept after reading it and still do. How can anyone least of all me be worthy of such love and devotion? Initially I thought it could be turned into a song, even to the point of coming up with a melodic line and chord structure. I then pondered on this and thought that it would fit in perfectly with the next Ward / Giltrap project if it was just spoken over a melodic backdrop. It then occurred to me that maybe Jenny would be interested in reciting the poem over a new piece called PRECIOUS inspired by the words.

She has a fabulous speaking voice and of course being an actress would be skilled at this sort of thing. She was at one point in her career a Bond girl, has done many voice overs and appeared in TV adverts. Anyway I put the idea to her and she said she would be delighted.

PRECIOUS AS ROCK TO THE STONE. 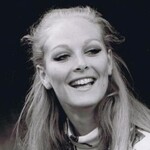 PRECIOUS AS BLOOD TO THE BONE. 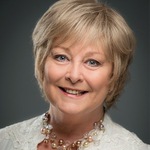 PRECIOUS THE EARTH TO THE TREE.

PRECIOUS YOUR LOVE IS TO ME.

PRECIOUS AS PEARL TO THE SHELL.

PRECIOUS AS BRONZE TO THE BELL.

PRECIOUS THE SKY TO AFAR.

PRECIOUS THE MAP TO AFAR.

PRECIOUS THE DAYS OF MY LIFE.

PRECIOUS THE LOVE OF A WIFE.

ETERNAL THE EARTH AND THE SKY,

Eventually the tune was written and Paul Ward has created a lovely string part to it. I'm pleased to report that Jenny loves it! Obviously it will be a while before she can get into a studio to add her lovely voice to the tune but it's in place ready to go when she is ready.

Jenny and I have never met up since those heady days of the late 1970's but we look forward to doing that one of these days. A few months ago I sent her The Last of England and she was delighted with it. The last time I saw her on TV was as a celebrity guest on POINTLESS with Bernard Cribbins.

I'm enclosing two images of her, one present day and one from the past. She was beautiful then and is beautiful now in mature age.

I'm so delighted to be associated with Nick Campling and the G7th capo company. I have been using Nick's amazing capos for years and they really are the best.

The company have now produced the beautiful HEARTSONG capo which of course is associated with my most well known tune.

Not only can you purchase this beautifully crafted capo but for every capo sold a £10 donation will be made to the University Hospitals Birmingham Charity to assist the NHS during the pandemic crisis.

To assist the NHS during this pandemic crisis, we are proud to introduce the Gordon Giltrap "Heartsong" Performance 3 capo, named and designed after Gordon's most famous composition "Heartsong" and in aid of The University Hospitals Birmingham Charity, UK.

I first booked him to come and play at my school when I was a teenager running the school folk club. We have kept in touch on and off over that time and, since I designed our first Performance capo, Gordon has used them when he plays.

He and I got our heads together to see what we could do to assist the NHS in this pandemic crisis, and I'm excited to introduce this Special Edition capo."

Gordon was awarded the MBE (Member of the Order of the British Empire) in the 2019 New Year's Honours for services to Music and Charity.

Fitted with our Adaptive Radius Technology, the Performance 3 string pad mechanism will actively adapt to match the curvature over the strings in EVERY position, on ANY guitar neck. This means the pressure is always evenly distributed over the fingerboard, giving unrivalled tuning stability.

Performance 3 is perfect for both acoustic and electric steel string guitars and comes complete with a Free Lifetime Warranty. 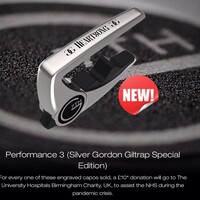 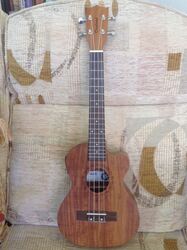 Yes folks I have finally succumbed to being the owner of a very nice Tanglewood Uke. Bought last year when we were staying with Sue and Mike Holton whilst Hilary and I were down in Kent and doing a gig at the Astor Theatre in Deal.

We were out with Sue and Mike seeing the wonderful sights of Ramsgate and were taken to a cracking antique centre that Sue recommended. Little did I know that of all places I would find this sweet sounding Uke at an antique centre!

But please don't expect any major compositions coming out of it any time yet, but one never knows. So a big THANKYOU to Sue and Mike for taking us there. It was a lovely visit.

When you have finished reading this page I would suggest you head to the Fylde website to read Roger's latest newsletter where you can find info on various musicians and their Covid-19 online events.

Here are a few photos taken on VE DAY. 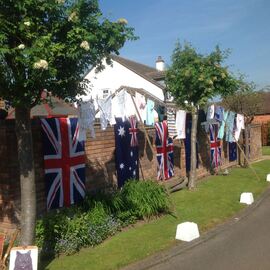 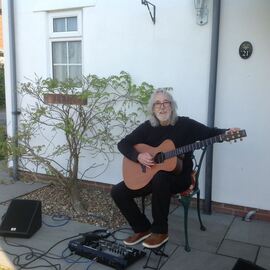 I was asked to play a few tunes for the small group of safe distance neighbours in our close. An hour later I was still playing and it was truly a memorable day and the locals enjoyed it. 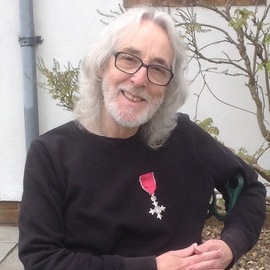 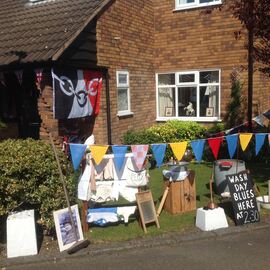 A friend said "are you going to be wearing your MBE?" I thought "why not" so here is the evidence along with a small selection of pics taken on the day. The couple opposite are war historians and put on a fantastic display. Hilary even got out her Grandfathers medals. 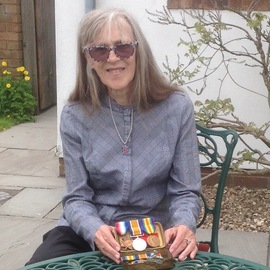 During this troubled time of lockdown and self-isolation many musicians are finding they have more time on their hands to devote to their chosen instrument. Mine of course is the guitar. I should very much like to make available the music and tablature for a very precious piece of music to me called Loren written in memory of a beautiful person called Loren Jansch the devoted wife of Bert Jansch.

This piece appears on The Last of England that I created with Paul Ward.

Please follow the link to find a bit more information and the piece. I hope all you guitarists out there enjoy learning the piece and derive much pleasure from it.

Here is the link: Tab for Loren

Be safe and well friends.