Fear Of The Dark 12inch single 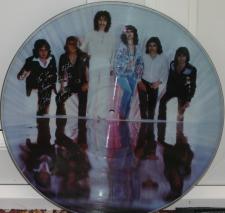 This is the only single that I have listed separately in the discography.

It was recorded by the Gordon Giltrap Band in 1978.

It was a limited edition of 15,000 copies, and was the first 12inch picture disc to be released in the UK, in a special stickered plastic cover.

It features 3 tracks, Side A "Fear Of the Dark" with the sunglasses picture from the LP of the same name. Side B, "Catwalk Blues" and "Inner Dream", featuring a very 1970's glam photo of the band. This is the side that i have included as the photo.