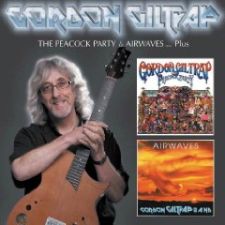 Edsel continues its programme of re-issues from Gordon Giltrap, one of the UK's premier guitarists. This release contains two albums by the Gordon Giltrap Band, "The Peacock Party" (1981) and "Airwaves" (1982), as well as five bonus live cuts from the same era.

The booklet contains brand new annotation by Gordon himself, as well as photos and ephemera from his own archives.