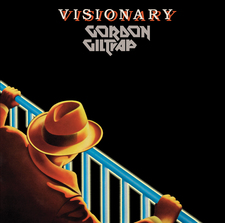 ESOTERIC RECORDINGS are pleased to announce the release of a newly remastered and expanded edition of the classic album "VISIONARY” by GORDON GILTRAP. For over forty years Gordon has enjoyed the well-deserved reputation as one of Britain’s greatest guitar players. He made his first recordings in the 1960s as folk artist, but by 1976 he had crossed into the Progressive Rock genre, backed by a band of outstanding musicians such as JOHN G. PERRY (Bass), ROD EDWARDS (keyboards) and SIMON PHILLIPS (drums).

"VISIONARY” was the first of Gordon’s "Progressive” albums and was the first part of a trilogy of albums which saw Gordon move from his folk background to a wider market,  and was released on the Electric label in 1976.

The inspiration for the record was based on the works of the 18th century artist and poet William Blake.

All the pieces were composed by Giltrap, the instrumental fusion of acoustic guitar with orchestral rock backing contrasted with Gordon's previous recordings as a singer / songwriter.

This Esoteric Recordings edition is newly remastered from the original tapes and includes three bonus tracks, including the previously unreleased 13-minute composition "Concerto”.